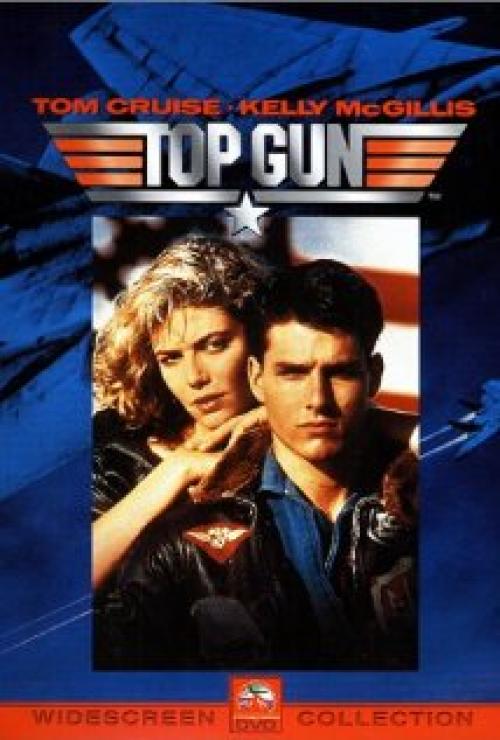 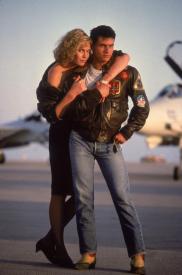 Had I written this review when I first saw it, I would have given it more stars. Tom Cruise plays a cocky yet very charming pilot. His smile shouts confidence and his “don’t give a shit” attitude fed into my immature age. I was then in the military and I ate all of this bravado up.

When I found myself stationed in Italy, I saw this film from a different perspective. An Italian girl I was seeing wanted to see Top Gun because of how cute she found Cruise. What I got out of it that second time was how it worked as propaganda for America's military might. Made during the Reagan era, Top Gun is a showcase of the United States' military power, featuring a cast of healthy all-American young men. This movie yells to the world that the U.S. has a bad ass, technically advanced armed forces.

Viewing it today I had a much less positive opinion. I now see Cruise’s Maverick as an arrogant ass. He flies million dollar tax funded jets as if he was going mudding in a used all-terrain vehicle. He breaks rules as if they are intended for everyone but him. I was later stationed in a hanger where I often met Navy pilots. I discovered that they are all full of themselves. It was at first off putting until I realized that you want those kind of men in the cockpit of a fighter plane. You sure don’t want a nervous unsure of himself pilot in a dog fight.

As far as the plot goes, it follows Maverick, a Navy pilot with daddy issues, who is a student at the United States Navy's elite fighter weapons school. He competes against other egomaniacs to be best in his class. He falls in love with a civilian instructor, who inappropriately wears military insignias on her civilian clothes. They argue, chase each other through town and then have sex in an overly romantic fashion. Someone close to Maverick dies and he supposedly learns some humility. The film’s action comes from a volley ball match and a dog fight with some Russian MIGs.

Speaking of the volley ball match, You Tube is full of parodies about just how gay this movie unintentionally is. Note how one dramatic scene between the pilots, for some reason, takes place where they are all in towels. Look how Tom Skerritt walks up behind a sad Maverick who is bent over a sink, wearing only his briefs. While in class, watching a video about jets, one pilot says, “I am getting hard.” His partner turns to him, stares into his eyes and says, “Don’t tease me.” Sure, it is meant as a joke but it just feeds in to the underlining homoeroticism.

Top Gun was such a huge hit that it put Cruise firmly on the A list. The movie's soundtrack spawned many hits. The most memorable musical moment is provided by the Righteous Brothers classic, “That Loving Feeling.” Cruise and Anthony Edwards croon it to Kelly McGillis early on and we hear the original version near the end.

As big as this movie was, it has not stood the test of time except as a time capsule to the cold war. Under the Obama administration, we are at war and have been for his entire presidency but it is not in fashion to glorify it. Some may watch this today and think how gauche it all is, while others may pine for a time when The United States took more unabashed pride in its military. 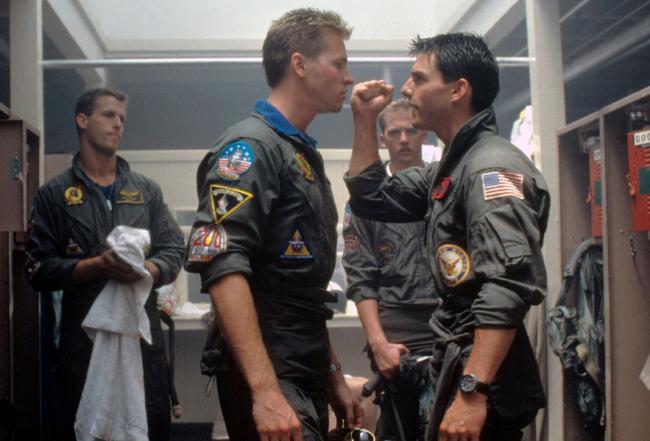 Val Kilmer and Tom Cruise repress their secret longings for each other in Top Gun.

Somehow I'd managed to avoid seeing this movie for nearly 30 years. Because it was such a cultural touchstone and the biggest box office hit of 1986 and has been spoofed countless times since, I was of course well aware of much of it and could even quote a couple of lines from it ("Your ego is writing checks your body can't cash." "I feel the need. The need for speed.") . Since Eric went ahead and reviewed it and there are talks of the long gestating sequel finally getting off the ground, now seemed like as good of a time as any to finally get around to watching it. I wish I could I say it was worth the wait.

Although, as Eric pointed out, the 1980s was a very different, more culturally conservative era, Hollywood wasn't much different in its politics. For instance Mathew Modine turned down the starring role and Bryan Adams refused to contribute a song to the soundtrack because they both felt that it promoted and romanticized warfare. And Val Kilmer only appeared because he was contractually obligated, but it should be noted that he has already agreed to appear in a sequel, but that's probably more a reflection on the current state of his career than on his political beliefs.

Cruise does play Maverick as an arrogant ass, but that's exactly how the character is written and rather the point of the story. He learns to rein in his arrogance, but without losing his ego. After watching him star and age in films over the past 3 decades, he looks unbelievably babyfaced here. The star quality that has stayed with him for all these years is still wet with dew, but is undeniable. One thing that has changed since this film's release is that in more recent films, Cruise and filmmakers have become more adept at hiding his lack of height. Here it is on full display in scenes such as the volleyball game where it's almost funny watching the 5' 7" Cruise supposedly spiking the ball. Reportedly, he had to wear lifts during his scenes with the 5' 10" Kelly McGillis.

The film works best in the scenes without dialogue, which means whenever they are in the air or are allowing the soundtrack to take over. The scenes of dogfights hold up very well and the music, while dated, is filled with classic songs that will no doubt evoke feelings of nostalgia to anyone of the Three Movie Buffs' generation. Filled with such 80's classics as "Danger Zone", sung by Kenny Loggins and "Take My Breath Away", by Berlin, the soundtrack album is certified 9x platinum, meaning that it has sold over 9,000,000 copies.

When the characters start talking however, the movie becomes a cliche ridden soap opera. It's not surprising that it's been spoofed so often. It's absolutely ripe for it. The Charlie Sheen starring Hot Shots! is probably the most famous example, but there are many others. The daddy issues, the sidekick who gets killed, the hero who must redeem himself, not a cliche is missed. It's all done with a gleaming polish, but these plot devices were creaky when they were appearing in silent films.

I wondered going in if Eric was exaggerating the homoerotic overtones, but if anything he was understating them. By the film's climax I was expecting Maverick and Iceman to just kiss already and get it over with. It almost seems deliberate. There are plenty of gleaming male bodies on display, but it's more than that. It's the way the scenes are set up, with the male characters often speaking directly into each other's faces in extreme closeup. The scene in the bathroom, with Cruise bent over the sink in just his tightie whities is almost laughable and seems like an odd or deliberate directorial choice. Yes, Cruise and McGillis get the love scene, but the real tension is between him and Kilmer. And it's interesting to note that the love scene was only added after test audiences felt it was missing and was shot months after the film was wrapped.

Top Gun is enjoyable despite its flaws. It's got enough action and Cruise's star power to keep it entertaining. And it only runs about an hour and forty-five minutes, thus preventing it from overstaying its welcome. I have to confess that I am intrigued to see what they can and will do with the sequel should it really come to pass. 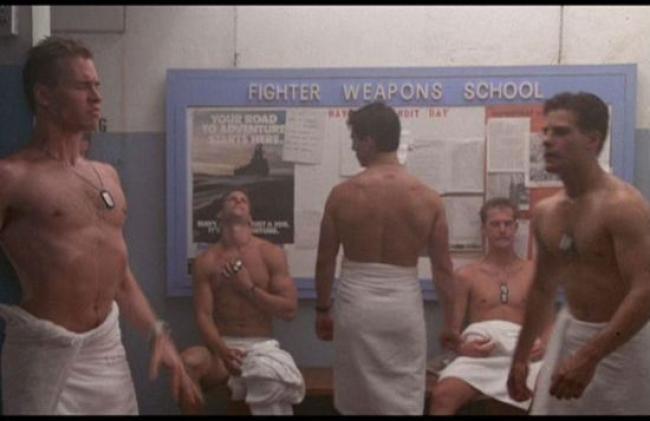 The cast of Top Gun.

I had seen Top Gun but not in many, many years. Yes the homo-eroticism is on full display. All the intimate male bonding is really just another of Top Gun's many cliches, that my brothers already mentioned. In Wings (1927) the real romance occurs between the two fly-boys much as it does between Cruise and Kilmer here. And the death scene between Buddy Rogers and Richard Arlen is copied here when Goose dies in Maverick's arms. And did anyone else notice Maverick's reluctance to make the first move with Charlie? (she even has a man's name) She is the aggressor when it comes to the intimate side of their relationship. It doesn't surprise me that their sex scene was filmed later and added to the movie.

As cheesy as Top Gun is, it is still quite entertaining though. The pace is quick and there are plenty of half-naked men to ogle. A third of the movie seems to take place in the locker room (see photo). The soundtrack is classic. It positively screams mid-1980s. The scenes in the air hold up very well. Tony Scott deserves credit for that. For a thirty year old movie the camera work and editing remain quite contemporary. Look for Tim Robbins and Meg Ryan, both early in their careers, in small roles.

Tom Cruise does indeed look baby-faced here. He was never exactly what you'd call handsome but he has a Cagney like charisma that supersedes mere bone structure. And he was already a fairly accomplished actor. He shows us the personal growth that Maverick experiences. Eric, there is a world of difference between arrogance and confidence. You can be self-assured without being a cocky prick, which is pretty much the journey Maverick goes on over the course of the movie.

As for the sequel, I think it's pretty obvious how that will go. Maverick states here that he wants to come back to the Top Gun Academy as a trainer. There's your basic set-up. He'll have to deal with the cocky new recruit played by some hot young actor. Of course Maverick will still come out on top. I'll definitely be in line to see it. 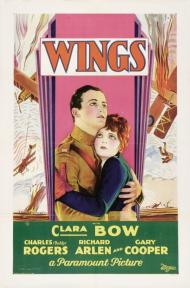