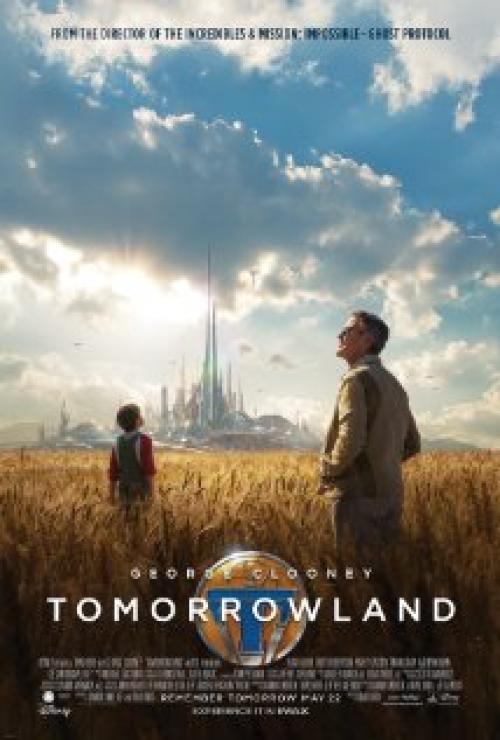 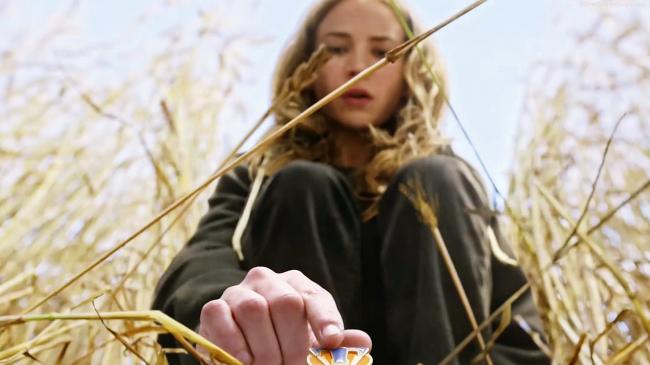 Tomorrowland marks the 6th time Disney has tried to adapt one of their theme park exhibits into a movie (if you count the made for TV movie The Tower of Terror). The other 4 theatrical films are Mission to Mars (2000), The Country Bears (2002), The Haunted Mansion (2003), and the one and only one that turned into a hit and a franchise, The Pirates of the Caribbean, also in 2003. It's no doubt due to the $1.2 billion the Pirates franchise has raked in so far (with the total to be added to in 2017 when the 5th installment arrives) that Disney is returning to that well for another film. Although it's certainly better than every other theme park inspired film before it apart from the first Pirates film, and it has some fun elements and sequences in it, the overall story is uneven and the ending is laughable in its naivety.

The premise of the film doesn't really bear up to close scrutiny so the only way to truly enjoy it is to not think too much about it. The Tomorrowland of the title is a futuristic city in another dimension that was founded by Gustave Eiffel, Jules Verne, Nikola Tesla, and Thomas Edison. They founded the city in the hope of shaping the future of mankind for the better without interference from government or big business. Britt Robertson plays Casey Newton, a teenage science enthusiast and optimist who is recruited by Athena, a robot from Tomorrowland in the shape of a young girl. It seems that one of the things Tomorrowland has invented is a way to tell the future and they've realized that the Earth is due to self-destruct in just 58 days. The details of exactly how are left sketchy and vague. Athena sees the optimism of Casey as a way to stop it. Top-billed Clooney comes into the story as Frank Walker, a former resident of Tomorrowland who was banished, again for reasons that don't make too much sense. Athena sends Casey to Frank and the three of them try to break into Tomorrowland and find a way of stopping the destruction of Earth.

There are some fun moments in the film. The mystery of the film as Casey learns about Tomorrowland through a mysterious pin is intriguing. Most of act 2 is an extended chase with Casey, Frank, and Athena being chased by and doing battle with a group of robots. Just why the robots want them so badly is yet again another plot point that doesn't make sense, but the chase and fight scenes are at least entertaining. The highlight of the entire film is the well paced and shot sequence of Casey and Frank trying to escape from his house while it is being assaulted by the robots.

The special effects and the look of the film are well done. Tomorrowland itself looks like the future as the 1950s envisioned it, which means basically it looks like The Jetsons. However, for a movie named after it, very little time is actually spent in it.

Both Clooney and Hugh Laurie get higher billing, but Jennifer Lawrence lookalike Britt Robertson is the star. She does a good job carrying the film and her optimism plays well off of Clooney's pessimism. Clooney plays himself as he so often does, with maybe a bit more world weariness. Laurie, as is so often the case with English actors in Hollywood films, plays the villain, but his part is relatively small. Raffey Cassidy is a scene stealer as the robot in the body of a young girl. She's the real brains of the outfit and also knows how to kick some ass.

As I mentioned, too many of the details of the film don't make sense. Tomorrowland was conceived of as a way to improve mankind's plight and the technology there is so far advanced that it could seemingly solve all of mankind's practical problems. Faster than light travel, artificial intelligence, and a fountain of youth formula are just three of the technologies shown that could completely alter life on Earth, but nothing is done with them.

Although I can't fault the intent of the movie's message, it's delivered in a silly and lightweight way. Boiled down the message is that optimism is better than pessimism, which is fine, but it's delivered with as much weight as that old "I'd like to buy the world a Coke" commercial. Perhaps fitting since this movie is basically a 2 hour advertisement for Walt Disney World in the guise of a narrative film. 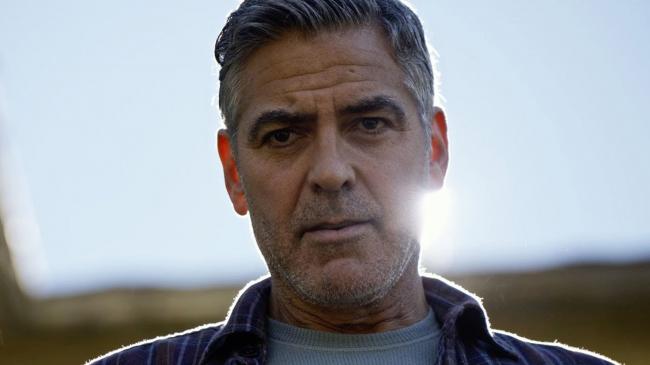 Like so many of today's summer blockbusters, Tomorrowland looks great but lacks logic and emotion. The action scenes and chases are exciting, as long as you don't stop and think about them at all. In some ways this movie reminded me of last year's Interstellar. Both are big budget, special effects driven, sci/fiction-fantasy movies with outlandish plots. The difference between them is that I became emotionally invested in the characters in that movie while the characters here left me cold. And I'm with Scott 100% as far as the hippie-dippie ending goes.

The main premise of Tomorrowland is intriguing; an alternate dimension created by four of the greatest and most creative minds of the nineteenth century, accessible by a pin. The opening scene at the 1964 World's Fair in Queens is nicely done. But, as my brother mentioned, relatively little of the movie actually takes place in Tomorrowland. But then to be honest it isn't all that fascinating of a place.

I'm not familiar with the theme ride at Disney World but from what is shown in the movie Tomorrowland has pretty much just two locales. There is a wheat field with futuristic looking buildings rising in the distance (see poster). It's a scene that blatantly copies the look of the Emerald City in The Wizard of Oz. The other location is an urban setting that, as Scott described it, looks a bit like where the Jetsons lived.

The cast is fine. Clooney, playing a bit older than his actual age, imbues Frank Walker with a cynical edge. Even though you just know he's really an optimist at heart, life has made him jaded. All of this is more implied than actually spoken in the dialogue. I agree that Britt Robertson delivers a star making turn as Casey Newton. Like Clooney, she's better than the material and together they nearly overcome the flaws in the script. Raffey Cassidy does indeed steal many scenes. If there is going to be a break-out character in the movie, no doubt it will be Athena.

Yes there are some things to enjoy in this movie based on an amusement park ride, but like the ride it ultimately goes nowhere. 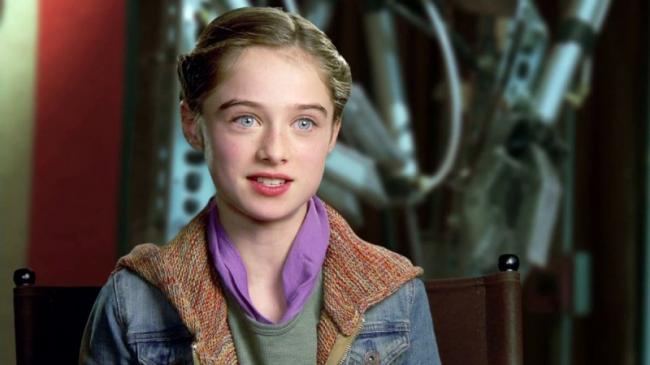 Raffey Cassidy as Athena in Tomorrowland

Not only does Tomorrowland not go anywhere, I was never sure when it was actually going to start. First we have Clooney and Robertson bantering in a joint narration and referring to a clock counting down. Then we have a flashback of Frank as a boy meeting Athena. Finally we have Casey Newton’s story. Everything before we meet her on the motorcycle should have been cut. All that we learn prior to that is explained again later anyway.

The film’s message, that Scott noted, of optimism being better than pessimism is ridiculous and I disagree with the philosophy. They are yin and yang, dark wolf and light wolf. It is the pessimists who bring the umbrella on a cloudy day and keep fresh batteries on hand. The optimists go through life hoping everything just happens to work out while it is the pessimists who prepare for the worst. In fact, I would call the creators of Tomorrowland pessimists and not optimists as they saw the negativity and bleak future and so prepared for all the doom and gloom. A complete optimist skips through life thinking, “It will all just work itself out.” Again, you cannot have optimism without pessimism and too much of either one is a bad thing.

Like Patrick wrote, the action scenes and chases were sometimes exciting and a bit of a distraction but not enough to make up for the naive message. A bunch of supposedly imaginative young people are not exactly the answer to every problem. Do you not think that intelligence should be included in the recruitment requirements. Was I the only one to note the racist ending? When the buttons were distributed to the “dreamers”, not a single one is shown being given to a male Caucasian?

I liked the subtle political commentary on President Obama’s real life cutting of NASA’s funding. Newton is against the dismantling of the launch pad as her rocket scientist Dad lost his job because of it. This past week a GOP-controlled House panel approved a $51 billion measure providing the Justice Department and NASA with modest budget hikes. We have yet to see if it gets passed the House floor and the President. Besides imagination and brains, we need money to build what the dreamers come up with.

I know. I got a bit off topic but as Scott wrote, nothing about this movie makes much sense and like Patrick, I felt Tomorrowland does not seem that fascinating of a place so I sought something in the film to enjoy. I also agree that Athena is the best thing about the film but I never bought her relationship with young Frank. He was a ten year old boy in love with a robot. This kid is mature enough to run away and live in another dimension without care but heartbroken puppy love is life altering?

There are a lot of mixed messages in this film. These four geniuses so loved the Earth that they abandoned it? The only one that you should truly understand is that you need to buy tickets to Disneyland, which has long been billed as, “The happiest place on Earth.” You just cannot get any more positive than a 130 minute long commercial for a theme park that tells its viewers that they are complacent, uncaring and lazy.