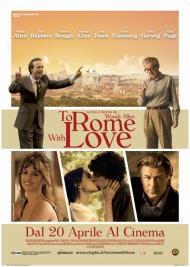 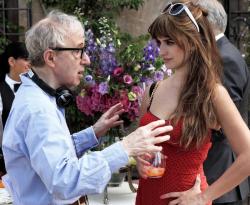 Woody Allen directs a voluptuous Penelope Cruz in To Rome with Love.

It's that time of year again. Regular as clockwork, it's time for another Woody Allen movie. Ever since 2005's Match Point, Allen's career has been on a bit of a rebound. Last year's Midnight in Paris was an Oscar winner and Allen's biggest box office success of all time. I suppose it was almost inevitable that his follow up would be a bit of a disappointment.

Instead of just one story, this movie tells four different unconnected ones. Well, unconnected except for the fact that they all take place in Rome as Allen continues his tour of European cities. As in most large cast, anthology movies, some of the stories work better than others, but even the best is lightweight and merely amusing rather than affecting or laugh-out-loud funny.

Alec Baldwin plays an architect who is visiting Rome for the first time since he lived there 30 years ago as a student. He imagines an affair he once had as a young man, interacting with his own memories. Jesse Eisenberg is Baldwin's younger self who fell in love with his girlfriend's best friend, played by a miscast Ellen Page. This segment is the most like a typical Allen film, with Eisenberg acting as the surrogate Woody. Page, who I find cute and talented, just doesn't really fit the bill as a sexy young actress who is supposed to make every man fall in love with her.

Her miscasting is pronounced by the fact that in another storyline, a very sexy Penelope Cruz, who really does make every man fall in love with her, appears playing a prostitute. Through a series of misunderstandings, Cruz ends up pretending to be a provincial young man's date as he tries to impress some rich family members and potential employers.  Meanwhile, his real wife is lost in Rome and almost ends up having an affair with a famous Italian actor. This was easily my favorite portion of the movie and the funniest.

The third storyline features Roberto Benigni as an ordinary Roman citizen who is suddenly made famous for no reason. This section didn't work for me at all. It seems at first as if Allen is trying to make a statement about fame, but it never really goes anywhere and seems to be summed up simply saying that being famous is better than not being famous.

Allen himself appears in the final storyline. This marks his first onscreen appearance since 2006's Scoop. He looks a little older, but he's still the same old Woody. Unfortunately, he hasn't saved the best storyline for himself. His bit is really a one joke premise. A former Opera producer, he discovers an unknown singer and tries to get him on stage. Unfortunately, the singer can only perform while in the shower and so Allen literally puts a shower on stage and has him sing in it. It's an amusing enough sight gag, but one that is stretched pretty thin.

Like nearly all of Woody's films, I found some things to enjoy in this one. It's not his greatest work by any means, but neither is it close to his worst. This is merely run of the mill Woody. 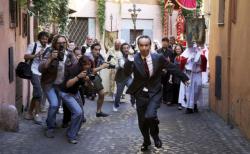 Roberto Benigni gets chased by papparazi in Woody Allen's To Rome with Love.

I enjoyed this anthology farce more than Scott did. I found parts of it to be both touching and laugh-out-loud funny. Fame - and its sometimes fleeting nature - is Allen's theme this time around, although sex and death are still topics of interest to the prolific filmmaker. Like most of his recent movies it's also part cinematic postcard to a famous European city.   Allen lovingly captures the architecture and flavor of Rome, making it a character in the movie rather than merely a setting.

The perks and absurdities of being a celebrity are wittily demonstrated in the Roberto Benigni section. Here an average Italian office clerk suddenly finds himself a very famous man with the press hanging on his every word. He is interviewed on television with all the formality of a visiting head of state. He is seriously questioned about the most banal aspects of his life, including whether he wears boxers or briefs. Then just as capriciously as his fame appeared, it's gone. Unlike Scott, I thought this was the funniest section of the movie.

The other storylines all touch on fame in more subtle ways. Allen's section features a mortician who can only sing in the shower but who ends up performing on stage in the movie's best sight gag. The Alec Baldwin/Jessie Eisenberg story ends with Ellen Page's Monica running off to star in a movie, while the story about the newlyweds has the bride being swept off her feet by a famous movie star. He is overweight and past his prime but is treated as a sex symbol by all the women he meets due to his movie star status. The point Allen makes – that it is better to be famous than not – is not exactly profound, but the ways he demonstrates that point are entertaining.

Allen has a few good moments in his first acting role in years. The scene at the outdoor dinner table where he tries to convince the mortician to audition as an opera singer is quite funny. Allen's comic timing and trademark stammering delivery remain unchanged. Check out the look of disgusted worry on his face in an earlier scene, after he shakes hands with the mortician who apologizes for not washing up first.

Nearly every review I've read - including my brother's - has called Ellen Page miscast as the sensual free-spirited Monica. I disagree. The script makes it clear she isn't an obvious va-va-voom sex symbol type like Penelope Cruz. It's her attitude and personality that make her sexually appealing rather than just her looks. I don't think she's outstanding in the part either but she's not as bad as has been written.

To Rome with Love features Woody Allen's trademark combination of whimsy and romance mixed with an underlying sense of life's ultimate futility. At the end of the day this might be run of the mill Woody Allen but even run of the mill work by this genius filmmaker is superior to 90 percent of the dreck currently filling movie theaters. 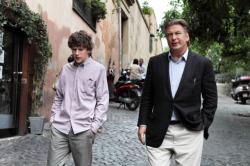 Jesse Eisenberg and Alec Baldwin in To Rome with Love

My brothers got this all wrong.  This is not about how being famous is better than not being famous.  Although a scene near the end has a character make that exact statement, this film is about perception and how we are influenced to see things that are not as they actually are.  Allen merely uses fame as an example of that.

Roberto Benignis story line speaks of how people become famous just because reporters says they are.  Just because someone appears on camera are they now worthy of attention?  At one point he asks his chauffeur how can he be famous when he has done nothing.  People want his autograph and beautiful women want to sleep with him because the media suddenly treats him as if he is important.

The bride justifies being sexually attracted to a past his prime married, bald, over weight actor because she read in a magazine that he was one of the worlds sexiest actors.  She later gets turned on by a thief, as if having an exciting, dangerous occupation makes him an innately good lover.   Her husband is busy trying to impress his distant relatives with a prostitute pretending to be his wife.  He expresses his admiration for his wife by calling her Madonna. (the mother of Jesus, not the pop star)  He puts his wife on a pedestal even though he states that he was a virgin on their wedding night and not the bride, but that is how he wants to think of her.

Eisenberg falls for Page who is clearly a phony.  Baldwin points out all of her lies but Eisenberg finds them all endearing.  He sees in her what he wants to.  We have to wonder how much influence his girlfriend had when she warned Eisenberg not to fall in love with Page as men always do.  With out her planted seed would Eisenberg have sown that relationship?

To weigh in on the debate of casting Page, I will side with Patrick.  A sex symbol type actress would have not worked as the role is one of a girl who gets men to like her by pretending to have similar interests.  If a more attractive actress played the part it would have been about her looks and not her actions.  Eisenberg falls for who she presents herself as and not as who she really is.  Note how quickly she changes when she gets the call from Hollywood.

Allens story line shows perception from a different angle.  He puts a man on stage who can only sing in the shower.  The audience recognizes the guys talent but sees the ridiculousness of the set up.  This story line directly contradicts my brothers statement about it is better to be famous.  The singer announces that he is very happy being a mortician and will no longer be performing in public.

The theme of perception is throughout the film.  When Eisenberg first meets Baldwin and last sees Baldwin, he is in front of a damaged wall.  There are large chunks of wall missing.  Someone has recently painted the good parts of the wall with drips of paint on the damaged parts.  With plant vines hanging romantically down the wall, you could easily perceive this as part of Romes decaying charm.   In reality though, it is just a dilapidated wall that someone carelessly painted.