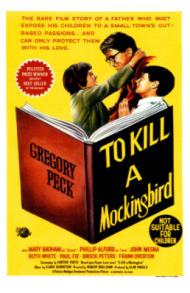 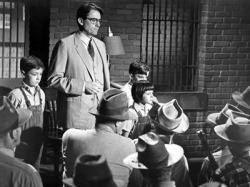 Gregory Peck in To Kill a Mockingbird.

Taken from the Pulitzer Prize winning novel by Harper Lee, To Kill a Mockingbird is both a compelling story of childhood innocence and self-discovery as well as a searing indictment of human prejudice. Set in a sleepy Alabama town in the 1930's, this movie tells the story of the Finch family as they experience many life altering events over the course of several summers. Gregory Peck stars as lawyer Atticus Finch, his most famous role, for which he received the Best Actor Academy Award.

The beginning third of the movie focuses on the Finch children, Jem and Scout. Who, along with their friend Dill, try to get a look at the elusive 'Boo' Radley. A local 'nut' supposedly kept locked in the basement of his family home that happens to be just down the street from the Finches. This is the most purely enjoyable section of the film wonderfully performed by the three talented youngsters. For an adult, watching them in their childish euphoria will conjure memories of carefree summer evenings spent in the pursuit of innocent pleasures.

When Atticus must defend Tom Robinson, a black man falsely accused of raping the white trash Mayella Ewell, this movie becomes a classic courtroom drama. Watching this ignorant and blatant liar spit venom at the jury simultaneously inspires both hopelessness and anger in the viewer.

The last section of the film tells how 'Boo' Radley finally comes out of hiding. Robert Duvall, in his film debut, plays the reclusive 'Boo' to perfection without uttering a single word.

Shot symbolically in black and white, this profoundly moving story blends humor, compassion and pathos with cruelty, hatred and tense drama. Like Sunset Boulevard and Apocalypse Now a voice-over narration sets the tone and keeps the story line from unraveling. 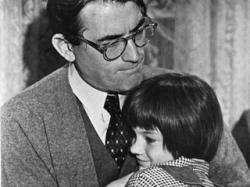 Gregory Peck and Mary Badham in To Kill a Mockingbird.

I truly enjoy ripping into Patrick's reviews, but I can't touch this one. He is right on the money. The children's summer adventures always make me think of our childhood. We did not live in as small of a town as the Finch’s but we played in our neighborhood and the nearby woods, much as Jem, Scout and Dill do in this film.

The story is told mostly from the perspective of a six year old girl who is struggling to grasp the nuisances of the adult world. Like most children, she is honest to a fault. She does not understand that she often says the wrong thing even though she is speaking the truth as she sees it. She unintentionally embarrasses the man coming to pay her father with vegetables in the opening scene. She does not mean to be rude when she points out that the boy eating with them pours syrup over everything.

Scout and Jem play in a world enhanced by their imagination. They make up stories that add some excitement to their carefree lives. In the course of this film they begin to see some harsh realities and we see them literally grow in front of us. They see their father shoot and kill a rabid dog. Scout fights a boy at school who taunts her because her father is defending a, “nigger.”

Through it all, their father Atticus is their rock, guiding them through life. After Jem witnesses a man say to Atticus, “You nigga lover.” Atticus explains, “There’s a lot of ugly things in this world son. I wish I could keep em all away from you, but it’s never possible.” Scout and Jem look up to him. An adult Scout narrates, “There just didn't seem to be anyone or anything Atticus couldn't explain.”

A major part of the story is about racial justice. Yet the biggest black part in the movie, outside the defendant, is the old Hollywood racial cliché, the maid! This movie attempts to say 'Don't believe something just because you have heard it is so', then it reinforces a racial stereotype. I know I have to take into account when this story takes place and when this movie was made, but I still found that interesting.

To Kill a Mockingbird is a truly timeless tale of childhood innocence clashing with some adult issues. I laughed out loud when Scout says, “Hey Miss Dubose.” When passing an elderly neighbor sitting on her porch. Miss Dubose yells back, “Don't you say "hey" to me, you ugly girl!” Another of my favorite lines is when Jem yells at Scout, “I swear Scout. You act more like a girl all the time.” The most nostalgia of all lines comes in the opening narration, which includes the line, “Somehow it was hotter then.” I agree but when we were kids we did not seem to mind so much. After all, like Jem and Scout, we had siblings, friends, some woods and our imagination to distract us from the discomforts of the world. 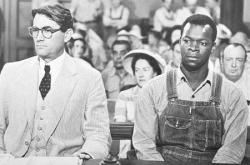 Gregory Peck and Brock Peters in To Kill a Mockingbird.

Any time a movie is made that is based on a great work of literature, I always worry about what Hollywood will do to it. With To Kill a Mockingbird though, I saw the movie first and then read the book. Which is really the best way to do it. If you've read the book and then see the movie, you will be upset by all that is left out of the film. But if you see the movie first, and then read the book, you will be delightfully surprised by all the extras the book has to offer. I think that's true of any movie based on a book.

Looking back on the movie, now that I have read the book, the only problem with the translation from paper to celluloid is that in the book, the perspective is completely from Scout Finch, the daughter. She narrates the book and while she is unable to fully understand the events going on around her, we the readers, are able to put the full story together by the information she gives us. The movie does this to a certain extent, but not as fully as in the book.

Gregory Peck, never one of my favorite actors, plays the role of Atticus perfectly. In fact he does such a good job in this film, that I wanted to know more about his character. What happened to his wife? Why do his kids call him by his first name? How did he go from being the 'best shot in the county' to being the quiet respectable lawyer?

I agree with Eric about the irony of one of the main black characters being a maid. In the book, she has a much bigger part and is much more of a major influence on the children's lives, but here she is reduced, as Eric pointed out, to a racial stereotype.

Although not as good as the book, To Kill a Mockingbird is a great movie. It's the kind that Hollywood supposedly never makes. I wonder how it slipped through?