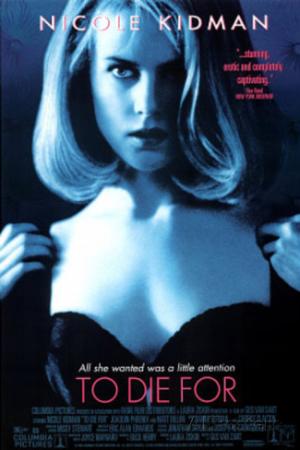 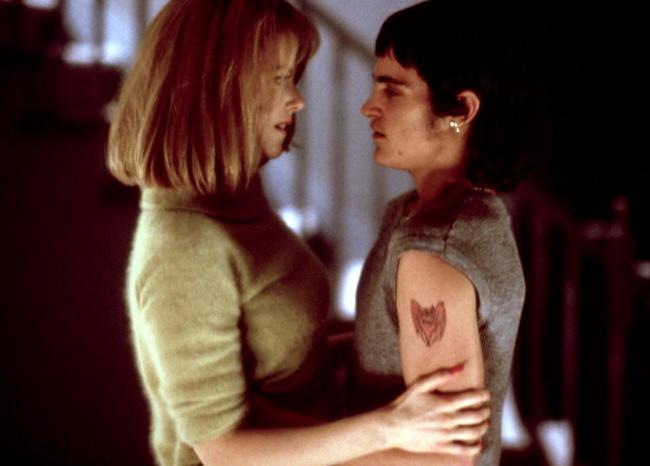 Nicole Kidman and Joaquin Phoenix in To Die For.

To Die For is a dark comedy/drama from 1995, based on the novel of the same name by Joyce Maynard, which was itself based on the real life case of Pamela Smart. If you're either too young, or simply don't remember the name, Smart, an aspiring local radio DJ in her early twenties, became infamous for conspiring to kill her husband with her 15-year-old lover and three of his friends in suburban New Hampshire in 1990. She was convicted and, as of this writing, is still serving her life sentence.

Maynard's book was loosely based on the Smart case; which Buck Henry has taken and smeared with a thick layer of satire for the screenplay and director Gus Van Sant serves up in mockumentary style. The result is an uneven movie that is never quite as funny or shocking as it wants to be. Although the following line, spoken by Joaquin Phoenix with just the right amount of reverence in his voice, is worth repeating... “Any time it rains, or when there's thunder and lightning, or when it snows, I have to jack off.”

What To Die For does have is a radiant central performance by Nicole Kidman. Doing her best Marilyn Monroe sex-kitten voice, Kidman looks stunning as the ruthlessly ambitious Suzanne Stone. Never mind that she's just a local weather girl married to a man whose father owns a family restaurant. Suzanne dreams of becoming the next Barbara Walters, and she'll stop at nothing to get what she wants.

In a way, Suzanne is ahead of her time. Today she would be perfect for one of those Real Housewives reality shows. After all she lives by the following words... “You're not anybody in America unless you're on TV. On TV is where we learn about who we really are. Because what's the point of doing anything worthwhile if nobody's watching? And if people are watching, it makes you a better person.”

Suzanne is just filled with ideas for the television station and one of them is “Teens Speak Out” where she follows high school students around asking them questions about their day-to-day lives and innermost feelings. This is how she meets her teenage lover and his friends. Suzanne envisions a Pulitzer but instead it leads to murder.

Matt Dillon is second billed as the doomed husband but it's a thankless part. Joaquin Phoenix, Casey Affleck and Allison Folland all get much juicier roles as the three delinquent teens Suzanne wraps around her fingers. Illeana Douglas plays Dillon's figure-skater sister – she gets the movie's final -and most sharply satiric- moment.

Although it never completely gels, To Die For is well worth watching for Nicole Kidman's wickedly ruthless performance alone.