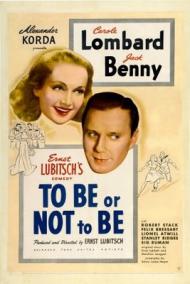 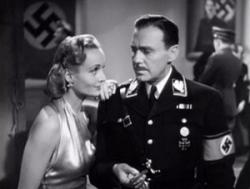 Carole Lombard and Jack Benny in To Be or Not to Be.

To Be or Not to Be was made in 1941.  It takes place two years earlier in Warsaw, when Germany invaded Poland.  It was released nearly two months after Carole Lombard's death in a plane crash.  She was flying around the country selling war bonds.  Her last words before entering her plane in Indiana were, "Before I say goodbye to you all - come on - join me in a big cheer- V for victory!"

Lombard plays Maria, a patriotic Polish actress married to an extremely vain actor, Joseph.  He is so conceited that he loves himself more than his wife.  This causes her to flirt with and date a Polish Air Force pilot named Stanislov.  He visits her backstage whenever Joseph starts reciting Hamlet's soliloquy.  This upsets Joseph, but not because he is visiting his wife but because he is walking out during his performance.  He complains about it to Maria, who says that, "Maybe he didn't feel well. Maybe he had to leave. Maybe he had a sudden heart attack."  To which Joseph replies, "I hope so."

During a production of Hamlet, Germany attacks. A narrator speaks of patriotism and the use of "V" for victory as a symbol of hope.  Stanislov goes to England to fly with the Royal Air Force while Maria and Joseph join the Polish underground.  Although this is a comedy it also works well as a World War II adventure tale.  Stanislov parachutes back into Poland after discovering a professor, Siletsky,  is a spy. He told Stanislov he lived in Warsaw, but he never heard of Maria.  He has to stop the spy, who is in Warsaw, before he reveals too much information.

Stanislov ends up staying with Maria.  Joseph finds him sleeping in his bed.  "How did you get here?"  "I jumped from a plane."  "Right into my bed aye?"  Siletsky has Maria brought in for questioning.  He propositions her to spy for Germany as well as start an affair.  Maria, Stanislov and Joseph devise a plan to kill Siletsky.    This involves Maria going to dinner with Siletsky and Joseph impersonating a Nazi officer.  He assures members of the underground that he can play the role, "I am going to do the impossible,  I am going to surpass myself."

I like how these older films make sexual suggestions in vague ways.  When Maria goes to Siletsky's room, he pours her a drink and says, "Should we drink to a blitzkrieg?" She quickly, yet cooling, responds,   "I prefer a slow encirclement."  Maria states that Stanislov and Maria never actually had sex, but watch her interest peak when Stanislov tells her, "I don't know about it being thrilling. But it's quite a bomber. You might not believe it, but I can drop three tons of dynamite in two minutes."

To Be or Not to Be  is a comedy first but it works well as a drama.  Someone gets shot and killed.  Maria seems surrounded by Nazi's who want to have sex with her.  In the film's most tense scene, the Nazi's discover Joseph is a fake.

Carole Lombard never looked so good.  Although known for her comedic timing, she was also quite a beautiful woman.  I only know Jack Benny from his television work, but he is hilarious here.   He cancelled his radio program on the day he heard of Lombard's death. Robert Stack is fine as the love struck pilot.  He would also go on to greater fame on television.

To Be or Not to Be is a great film that only seems to go over the top in one brief moment on a plane. As I wrote, this is a comedy and to mark it down for one scene is ridiculous.  Besides, the final scene makes up for it. 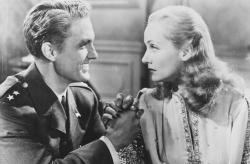 Robert Stack and Carole Lombard in To Be or Not to Be.

To Be or Not to Be starts off as a farce between two married, bickering actors before segueing into a fast-paced war satire. Director Ernst Lubitsch finds just the right balance of silliness and drama and the cast is sterling silver. This one is truly a masterpiece.

The script gives Carole Lombard more of the laughs during the early parts of the movie before allowing Jack Benny to shine as the story progresses. Lubitsch makes good use of both their talents, with her suggestive double entendres and his ill concealed vanity comprising most of the humor. The supporting players also all give fine performances.

The script is hilarious and filled with great comic lines. Eric, the joke you mentioned where Benny complains to Lombard about Stack walking out on his soliloquy continues on after his, “I hope so.” She responds, “If he stayed he might have died.” Benny then gets the final punch-line, “Maybe he's dead already! Oh, darling, you're so comforting.”

My favorite Lombard speech comes near the beginning of the movie when she complains to Benny backstage. “It's becoming ridiculous the way you grab attention. Whenever I start to tell a story, you finish it. If I go on a diet, you lose the weight. If I have a cold, you cough. And if we should ever have a baby, I'm not so sure I'd be the mother.”  Her rapid delivery is perfect.

At the risk of giving away too many of the jokes I have to mention one more bit. When a German colonel tells Benny (disguised as a spy) that he once saw the actor Joseph Tura (Benny’s actual character) on the stage in Warsaw before the war, Benny cannot resist showing interest in the man’s opinion of him. That is until he hears the reply. “What he did to Shakespeare we are doing now to Poland.”

To Be or Not to Be is one hell of a funny movie. 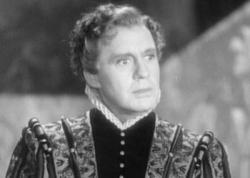 Jack Benny gives us his Hamlet in To Be or Not to Be.

Perhaps its because you both built this movie up so much, but I didn't find it quite so enjoyable as you did. It's amusing enough and I agree that Jack Benny is terrific, but for me it only worked as a comedy and not as a drama or as any kind of adventure film.

I'm a big fan of Lombard's and she has a few cute moments at the beginning, but the movie doesn't really take off until Benny takes center stage. In fact, I hesitate to say it in light of how much you both seemed to have enjoyed it, but up until Benny disguises himself as first the Nazi and then the Professor, I was actually bored and was seriously wondering just what it was you both loved so much. Once the "So they call me Concentration Camp Ehrhardt?" exchange happens the laughs start coming faster.

One thing that neither of you mentioned, but struck me was the similarity between the finale in Warsaw here and Tarantino's Inglorious Basterds. Both of them involve Hitler in a theater and an assassination attempt on his life. Okay, so they're not really that similar, but there's definitely room for comparison.

Eric, I didn't find the scene in the plane to be over the top. I actually thought it was quite funny in a dark sort of way. Maybe it's because I wasn't taking any of it seriously that I didn't mind the broader humor.  I do agree though the final joke was quite good.

The cast is terrific. Lombard was a fantastic and beautiful comedienne whose untimely death was truly tragic. For my money though it is Jack Benny who walks away with the movie.

There are definitely some very funny moments but I wouldn't call this a masterpiece.