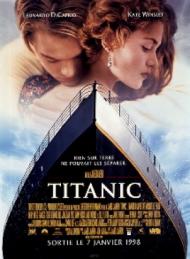 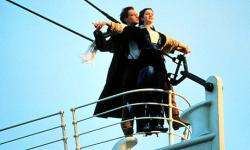 Not since Gone with the Wind has a love story been put to such a grand scale. Both are set against deadly, historical backdrops. The sinking ship and the civil war. Both have naive young upscale woman falling for men of questionable backgrounds. Both have British ladies playing the American female lead. Most importantly, both end with the lovers parted.

Titanic is the story of Rose, a rich girl, who falls in love with Jack, a poor boy, aboard the ill-fated ship. Their love affair is brief and sweet. Rose is the submissive daughter with the dominating mother and fiancée. Jack is an artist with the rosy outlook on life. This is a movie, so remember, rich people are snobs and poor people are nice.

The real majesty of this movie though, is not the love story, but the facts that the events surrounding the love story are true. When the ship hits the iceberg I find myself asking the question. What would I have done? Fought my way onto a lifeboat? Died with a brandy in my hand? The fact that the sinking takes over an hour of film time you really find yourself lost in the frustration, fear and chaos. The effects are excellent and you sincerely get the feeling of being there.

Although the film is truly near perfection, I will point out a couple of complaints. First, there is the inconsistent dialogue. 'I'm tired of being polite god damn it'. Who speaks that way? 'I assure you' is said several times. Was that a popular phrase back then? 'Stay back. Don't come any closer.' Is it a law that whenever someone in a movie or TV show is trying to be talked out of jumping from a high place that they have to say that line? However, 'I d rather be his whore than your wife', is a great line.

My second complaint is Billy Zane. Who must be smothered by now, considering he hasn't acted his way out of that paper bag yet. My advice to you Billy is this quote from The Rocketeer; 'Acting is acting without looking like your acting'. The actor who played the officer in charge of the lifeboats that rescue Rose should have played Billy Zane's part. He demonstrates more genuine emotion in his small part than Zane does the entire movie.

The use of clocks and time as symbolism is present here. 'Titanic goes to America in 5 minutes.' The clock on the staircase. The clock on the mantel in Roses room. The clock the architect sets. The first officer giving the order to 'mark the time' of the ship hitting the iceberg. The note that reads 'meet me at the clock'. The many pocket watches that get pulled out and looked at. It's all symbolic of the limited time the lovers have together, and that the life of the ship is running out?

This is an enduring love story with wide eyed action sequences and awesome special effects. James Cameron is one of the best directors working, especially when it comes to using special effects. Remember Aliens and Terminator? Its to bad James Cameron can't write as well as he directs. If he could this movie might have had a few less clichés. 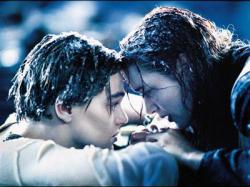 Eric's take on this movie is not far off from mine. Certainly, this is a spectacular retelling of one of the most famous catastrophes in human history. As mentioned above, the special effects and direction are very impressive and I don't think the comparison to Gone with the Wind is inappropriate. They are both highly romanticized and over the top. His criticism of some of the more vapid dialogue is also correct. In fact, the only thing I must take exception to is his lowly opinion of Billy Zane.

I, on the contrary, thought he gave a very heartfelt and powerful performance. He does, after all, make the audience despise his character as much as any in film history. He conveys just the right expression of jealous anguish whenever Jack is in the same room. Unlike Leonardo De Caprio, Who seems completely miscast, I think Mr. Zane inhabits his character with ease and believability. It is the baby-faced Leo that I have a hard time buying as the worldly, starving artist.

The entire love affair story line is by far the weakest aspect of Titanic. Except for their touching final scene together, the two leads have very little chemistry or emotional integrity. Kate Winslet does, however, do a decent job with some very bad dialogue. The rest of the cast is quite good. Kathy Bates has fun as Molly Brown though she is underused. And I could not finish this review without mentioning the remarkable comeback of Gloria Stuart at the age of 87.

Box-office records aside, Titanic should stay afloat as a classic piece of late twentieth century cinema. 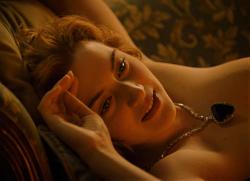 As my brothers pointed out, Titanic is one of the greatest movies ever made, and yet at the same time, it features some pretty poor performances by its lead actors. The effects, the action, and the drama of the events of that fateful night are so great though, that you don't really notice or care about the acting, until you've seen the movie multiple times.

Like Patrick, I enjoyed Billy Zane's performance as the snobbish, look out only for yourself, Cal. And it is primarily Leonardo and Kate that I found to be weak. Yet, I don't think it was really their fault. As Eric pointed out, James Cameron is a far better Director then he is a Writer and he provides only a so-so script for this movie. One scene that always echoes of poor dialogue is the scene on deck where Jack is showing Rose his pictures and he asks her if she loves Cal. Not only is the dialogue weak, but also poorly acted.

But let's face it, this is an event driven movie, not a character driven one. The events of that cold April night and their detailed reconstruction, are so dramatic and so well represented here, that you really do feel as if you are there with Jack and Rose as they fight to stay aboard the ship as it slowly descends into the icy north Atlantic.

The action and the effects are what people will remember about this movie. That and that damn Celine Dion song.