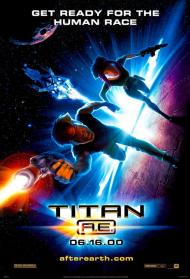 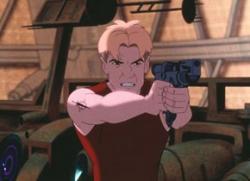 This movie starts off looking and feeling much like a traditional Disney Feature. After the initial father and son scene, however, it very quickly becomes apparent that this is a different movie experience in terms of content. Most notably in the fact that billions of people are killed. It's the 31st century and Earth has been destroyed by the evil Drej race, an alien energy being. The only remaining humans survive as third class citizens on bleak drift colonies in space.

Among these is the young Cale, possessor of a ring given him by his father. This was before the Earth was blown up and his father disappeared in the space ship Titan.

It is not until years later that Cale learns the importance of this ring, that it holds the key to finding the Titan, which is humanities, only hope for survival. He is joined by Korso one of his father's old comrade in arms and the beautiful pilot Akima. The search for the Titan begins, but will they find it before the Drej do?

Visually stunning animation and the lead voices are well done by Matt Damon and Drew Barrymore. There are also several amusing, alien sidekicks characters including one voiced by Nathan Lane and another that is sort of an alien Peter Lorre. 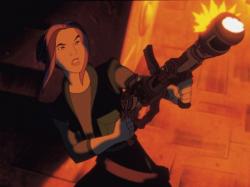 When Moses came out to theaters it was billed as the next step in animation. That was about as accurate as the movie was entertaining. Which, in my and my 6-year-olds opinion, was not very entertaining at all.

Titan AE on the other hand is a constant panorama of dazzling colors and movement.

I watched much of the film in awe of the graphics. Sometimes hoping that the scene would not end so quickly as I was still digesting the amazing background illustration. The graphics in Dinosaurs were impressive the first five minutes before becoming rather mundane. The splendid texture and luxurious appeal of the art here impressed me through out the film.

The plot was not so perfect. It left many unanswered questions. Why did the aliens blow up the Earth? What really happened to Cale's father?

The editing was a little shabby as well. In one scene, Akima is sent out into space and the next she is in a prison with only a sentence for an explanation. Another bothersome part was the fact that three different ships learn the location of the Titan and go after it. The last one to leave is the first one there and the first one that learns of its location is the last.

Even with some inconsistency's I was so drawn in by the amazing animation that I will excuse them. 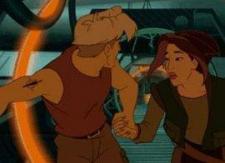 The character animation fails to blend with the computer generated ships and aliens.

When a movie runs just an hour and 20 minutes and still has you looking at your watch, as this one did me, you know something's wrong with it.

You both go on about the amazing animation and I suppose that just shows your reviews are as dated as the computer animation in this movie. At the time these might have seemed new and impressive, but computer animation has moved along since then. Don't get me wrong, some of it is fairly good, but the problem is that it doesn't integrate well with the more standard animation. The spaceships and the aliens are great and look quite realistic, but then Cale and the other are just drawn with standard looking animation so they appear as if they're from an entirely different movie. And at times it seems that the filmmakers are too proud of the CGI bits because they keep showing them.

I would have been much happier to see less CGI and more character/plot development. Why are the aliens so desperate to destroy all of humanity? Why did Cale's dad make it almost impossible for anyone to find the Titan? What's to stop the aliens from coming along and blowing Planet Bob (Earth II) up also? Were those few aliens Cale destroyed it, or are there more of them?

Patrick you mention the amusing sidekicks. I saw the sidekicks, but must have missed the amusing bits. There are a few times where you can tell they're trying to be funny, but only once or twice do they actually succeed. Clearly the animation budget precluded paying for a decent script.

You wanted the scenes to slow down Eric, I wanted them to speed up so that this movie would be over with as quickly as possible.