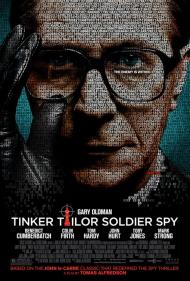 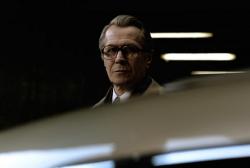 This Cold War spy tale is a worthy adaptation of one of the greatest espionage novels ever written. It may not equal the book that it's based on, but it certainly does as decent a job as it's possible to do within the time frame of a movie. To truly do the story justice would require a much longer film than is practical to make. In 1979, the BBC made a well received seven part mini-series from it starring Alec Guinness.

From the book by John Le Carre, the plot features the author's most famous literary character, the cerebral spymaster, George Smiley. Although there are different tendrils to the plot, the main thrust of it is the search for a high placed Soviet double-agent within the British Secret Service (known in Le Carre speak as The Circus). Recently forced into retirement, Smiley is given the job of discovering the identity of the mole and he must dig through the Circus's and his own past to find out which one of his  contemporaries is "one of them" instead of "one of us".

Smiley is the anti-James Bond spy. Bespectacled, pudgy and rather stoic, Smiley is one of the grey men in rumpled suits who inhabit Le Carre's dreary 1970s London. A subdued and restrained Gary Oldman plays the role with great skill. This isn't a flashy part as Smiley tends to internalize his emotions, but Oldman manages to convey them in small ways and you sense that this is a man who has kept things inside for so long that he may crack at any moment.

The look and feel of the film is gloomy and oppressive. It features a palette of dull greys and browns, perfectly capturing the atmosphere from the novel.  Keeping the story set in the 1970s was the only way to remain faithful to the story as the time period is crucial to it. England in the early 1970s was torn by industrial strikes, rioting and power outages. Coal miners strikes forced the country to go to a three day work week as rolling brownouts were felt across the country. This was a city suffering from a hangover after the long party that was swinging 60s London. It's the perfect setting for a tale such as this and much credit must be given to the production team who managed to recreate it so well.

Along with Oldman the film features a fantastic cast of who's-who of British actors. Benedict Cumberbatch (the BBC's Sherlock Holmes), plays Peter Guillam, Smiley's right hand man. Guillam is  younger and does Smiley's footwork, including infiltrating the Circus to steal documents in one of the movie's tenser scenes. Rising star Tom Hardy plays Ricki Tarr, the rogue agent who first brings to light the information that there is a mole. Veteran character actor, John Hurt is Control, Smiley's old boss for whom the identity of the mole was his obsession. As one of the only women in the cast, Kathy Burke is a scene-stealer as the old researcher, Connie Sachs. Colin Firth, Ciaran Hinds, Toby Jones, and Mark Strong are among some of the other recognizable faces, all of whom do a good job.

The condensing of the story to fit within the time constraints of a movie does have one unfortunate side effect and that is that we lose out on some characterization, especially among the supporting characters. There are four suspected of being the mole. Each one represented by a code name from the film's title. In the book we are given time to get know the character of each one of them, while here we are given more of a quick impression. This has the effect of lessening the impact of the big reveal at the end of the movie. We don't really know any of the suspects all that well and so there's not a big investment by the audience as to which one it turns out to be.

For anyone who relishes a multi-layered espionage tale from the pen of the grand master of the genre, this movie is a must see. It's a rich film, packed with detail and deceit that will, I think, reward multiple viewings. I'm already looking forward to watching it again. 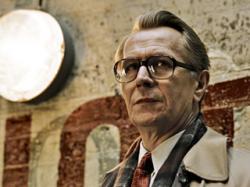 Scott you used several apt adjectives in your review. Tinker Tailor Soldier Spy is dreary, oppressive and gloomy. It is also slowly paced and filled with endless flashbacks as Oldman interrogates suspects who provide him, and the audience, with different pieces of the puzzle. I have never read the novel, or any of John Le Carre’s work for that matter, so I am sure I missed some of the more subtle points in this intricately plotted story.

The acting is quite good, especially from the supporting cast. In his limited role, John Hurt hams it up like a latter day, British Al Pacino, barking out orders at his underlings. Colin Firth continues to impress with his ever broadening range. And I recognized Kathy Burke from Absolutely Fabulous. I agree she’s a scene stealer. Gary Oldman’s performance, as Scott wrote, is subdued and restrained. I agree, but too much so, in fact. This is one of those instances where the nomination is the reward, as he doesn’t stand a snowball’s chance in hell of winning.

Clearly this movie’s target audience is fans of the book. Again I’m sure I would have appreciated it more if I was among them. Not being familiar with him, the character of George Smiley never engaged me. He is such a dullard. Yes, he’s intelligent, resourceful and brave and you can see the wheels constantly spinning in his head through Oldman’s acting talents. It wasn’t enough to make up for the torturously slow pace and what seem like endless shots of him standing still while deeply pondering something, however.

There are a few brief moments of action that made me sit up and pay attention. But they are few and far between. Scott you are correct that the big reveal over which of the eponymous suspects the mole is lacks punch. Tinker Tailor Soldier Spy is a multi-layered espionage tale but not a movie I ever plan on watching again. 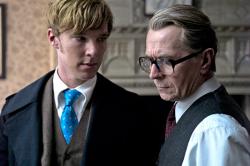 I agree with Patrick on this one. Tinker Tailor Soldier Spy is overly complicated and dull.  You could argue that I did not pay close enough attention, but the film never drew me in to where I even wanted to.

It has some good moments.  Like Patrick wrote, there are a couple of brief action scenes and a bit of sex, but we mostly have to sit through countless conversations trying to figure out what any of it means.   A movie should not be an exercise in analytical thinking.  I should not have to work so hard to enjoy a film.

The large famous British cast was interesting to watch.  Besides the usual suspects, Colin Firth and Mark Strong, I enjoyed seeing Benedict Cumberbatch after recently discovering his Sherlock Holmes television show.  I like Tom Hardy, but he seems to be every where these days.  For the life of me I cannot imagine why Oldman was nominated for an Academy Award.  Is being subdued really all it takes?

My favorite moment in the entire film is when the unattractive fat woman says to Oldman, "I don't know about you George, but I feel seriously under-fucked."  The line has nothing to do with the actual plot but it is the moment that will stay with me the longest. 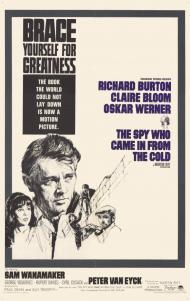