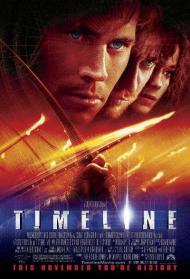 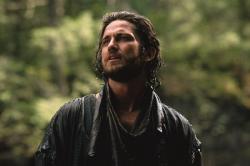 Timeline is directed by Richard Donner and based on a book by Michael Crichton. Why then, does this movie look so damn amateurish? Last summer I saw a joust and sword fight enactment that looked more realistic than this movie.

Paul Walker stars as the son of an archaeologist who gets trapped in France during the 100 Years War. He and a group of people go back in time to find him. Of course it doesn't matter how they do it. It is a time machine via a wormhole. Whatever! The movie spends a few minutes trying to explain it, as if it actually matters.

Anyway, they go back. Most of the group gets killed and they end up killing plenty of folks themselves. God knows how badly they changed history with all that they muck up, but this is a movie, a bad one at that, and those questioned are only asked when the writer has an answer.

They find his dad and rescue him. In the course of doing so a dozen or so people are killed. So what is the victory here? The old guy is saved, but they lost a few marines and a French-speaking student. Not to mention all of the guards who may well have been ancestors of countless people.

The action is fast paced and constant but, when the plot makes little to no sense, pacing hardly matters. I didn't care who lived or who died. Actually, the old guy should have been left to rot in the 13th century. It would have saved many lives.