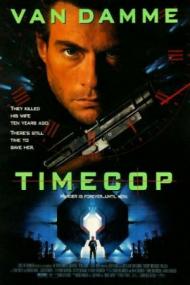 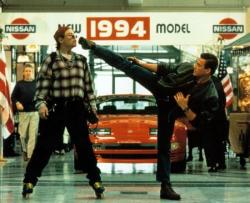 With Timecop, Jean-Claude Van Damme came close to making the "A" list. This was his second film that he starred in to just crack the hundred million dollar mark at the box office. (The other being Universal Soldier)  It would also be his last. He followed this up with the dismal Street Fighter, whose domestic gross did not even match its budget. Add in Van Damme's drug addiction and his career started racing down hill.

Based on a comic book series from Dark Horse Comics, Timecop tells the story of an agency set up to police people who travel through time, so as to stop them from affecting the future. Examples given as a time travel crime are stealing gold, using future information on what stock to buy in the past, buying valuable real estate before it is valuable...etc.

JCVD stars as Walker, a Timecop with an air of gloom hanging over him. This was caused by his wife being murdered when he was a rookie police officer. He joins the Timecops and ends up arresting his former partner who is secretly working for a Senator vying for the White House, who is using time travel to make money to fund his campaign.

Ron Silver is great as the sinister Senator with the million dollar smile. When snacking in a limo, he casually slams the guy next to him into the door without missing a bite. He dared to tell the Senator he could not do something. Later, he tells the man, "Look, don't expect to be my chief of staff if my slamming your face into the side of the car is gonna turn you into a sniveling worm."

Walker is joined by an internal affairs officer who is investigating his former partner by shadowing Walker. Together they travel back in time to investigate a time travel crime involving the Senator who has traveled back in time to advice his younger self. It is also in the same time period that Walker's wife was killed.

Timecop is one of JCVD's better films and it is clearly due to the script. Walker is a sympathetic character and he quickly earns the audience's admiration. As the film moves along, he becomes all the more desperate and I easily found myself wrapped up in the proceedings. The plot finds a whole new level of tension when he runs into his wife and tells her what to do.

The plot only suffers in the same way most time travel films do. Once you start to question the time travel plot it starts to fall apart. Why does the senator not just travel back in time to the hospital Walker was born in and kill him as a baby? Why do they have a wall in front of the time travel machine if there is a danger of slamming into it?

The script contains some clever lines. When Walker and the Internal Affairs officer travel to the past, she says that she should call her sixteen year old self and tell her not to sleep with Bobby as it was not very satisfying. Walker suggests, "A smart woman would call Bobby and give him some advice." One line even pokes fun at Van Damme's accent, when Walker says to his wife, "He must have read my mind." to which she responds, "The way you speak English, he'd have to."

JCVD employs his trademark high kick and possibly his most famous scene ever where he does the splits to avoid being electrocuted. He also does a competent job of acting. In the final scenes he runs into his younger self. We then see how differently he plays the older bitter Walker and the baby faced confused young cop. Granted, this is not award worthy but he did what was required of him.

The film ends on a good note and was clearly open for a sequel. However, a disappointed Van Damme explained in an interview that, "Time Cop could have been a very profitable franchise, but those idiots chose instead to sell the rights to television." If Van Damme could have stayed off the drugs and a sequel made to this film, he may have permanently made it past the "B" list. Although he would go on to star in other financially successful films, this proved to be his last true blockbuster.