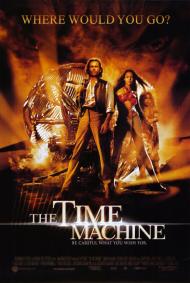 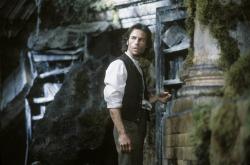 For those unfamiliar with the plot of this H.G. Wells classic, it tells the story of a Victorian era scientist who develops a machine which enables him to travel either backwards or forwards through time. A plot device which has been virtually done to death now, but which, in 1894, was quite remarkably original. Using his machine, the time traveler journeys into the distant future where humanity has split into two separate species, the Eloi who live a pastoral existence above ground, and the Morlocks who dwell in caves deep beneath the planet's surface.

The plot in the preceding paragraph, would suffice to describe both the book and this movie version. Of course, in the details the plots vary quite a bit. For a start, the Time Traveler is given both a name, and a deeper, more personal reason for developing the means of traveling through time. The Morlocks are also quite different creatures in the movie, they are much more frightening here, and they supply at least one, jump out of your seat moment. And the addition of Jeremy Irons's Uber-Morlock, is also a departure from the book, as is the ending, which is a little more Hollywoodized than the original. And yet, even as a fan of the book, the changes leave you little to complain about. The changes in this movie are simply those necessary to translate a book into a movie. While it is interesting in the book to read a chapter on the theory of time as the fourth dimension, it wouldn't make for a great movie. Unlike the changes in the recent adaptation of Anne Rice's Queen of the Damned, these changes are smartly made and make for a better movie.

The two things I read about this movie before seeing it, was that it was being directed by the Great-Grandson of H.G. Wells; Simon Wells, and that it was not as good as the classic 1960 version, directed by George Pal. Apart from being nice water cooler knowledge, the direction by Simon, added nothing to the movie that I could tell. He's a decent director, but not spectacular in any obvious way. As for the previous version, I must confess to never having seen it. Therefore, without that movie to compare it to, I seem to have enjoyed this new version more than most movie reviewers.

My only real problem with this movie was that it lacked that extra magic spark to really suck you into it. It was competently made, with lavish special effects, and yet it's never able to entirely bring you into the movie, due, I think, to a lack of depth in the supporting characters and plot. Apart from the Time Traveler himself, the rest of the characters are all pretty two-dimensional, and the plot is really just a series of events, rather than a strong story arc.

The one thing that this story did lose in translation from printed page to silver screen, was the emotional impact and dark outlook, which fills the book. H.G. Wells was the original author of dark science fiction. His vision of the future was much more Bladerunner, and much less Star Trek, and this movie seems to fly in the face of that. It possesses a certain optimism that Wells would not, I think, have approved of. 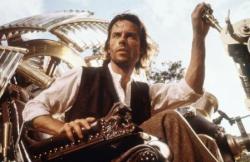 The Time Machine is a lightweight unfulfilling film. Think of it as a vegetarian Thanksgiving dinner with diet soda and fruit for dessert. With so many possibilities for action, special effects and plot I hoped for a whole lot more.

As Scott has already wrote, this is the story of a time traveler who ends up in a future where one species, the Morlock, feeds regularly on another, the complacent Eloi. This all sounds like a nice setup, but very little is done with it. There is really only one good action sequence, and if you have read the book or seen the previous movie version then you know where it is headed.

Speaking of the previous movie version, I have seen it, and it is easily as good or better than this one. Both versions have a scene where the time traveler is traveling through time and stares at a department store window. In the window is a mannequin whose clothes change over the years to match the changing fashion styles. In the original version made in the 50's the styles are accurate only up to then. In this version we only see some fashion changes and none that go up to the year 2000. Why the director chose not to take advantage of common knowledge is beyond me. You could of had some comical reactions from Guy Pearce as he watched the clothes get more revealing over the years. Or what would have been his reaction had the store became an S&M shop. The possibility for humor was great, but the director's imagination was apparently not.

The original version was a straight out adventure film. The time traveler wished to travel through time just out of scientific curiosity. He travels to the future and has a rousing adventure. This new version is bogged down by his motivation now being love. However, his character is hollow and at no point do you really care for him. So his emotional motivation is lost.

Since this story is really not a character piece the director should have gone for a whole lot more action sequences. This movie is only an hour and a half long. There was plenty of room in this story for more excitement.

Guy Pearce and his titular invention in The Time Machine.

I'm with Eric on this one. The 1960 version is far superior. This movie even makes the mistake of referring to that movie and to the Wells' novel, which makes the plot here seem like it's occurring in an alternate universe. The Victorian era setting is well recreated at the beginning of the movie but the world of the future looks cheap and unconvincing. The CGI effects are already quite dated. The Morlocks in particular are quite fake looking.

Guy Pearce is good in the lead at least. Even though he is never fully developed as a character, he manages to make the very simple story more compelling than it should be. As usual Jeremy Irons hams it up in his one brief scene as the leader of the Morlocks, and Orlando Jones brings a bit of levity to the story as Vox, a computer program containing all of humanities' collective knowledge that outlasts civilization. These last two characters are about the only original ideas this version has to offer.

In a nod to the George Pal classic, actor Alan Young makes a cameo as a florist. He played the role of Filby in 1960. In this version the character's name is spelled Philby and he's played by Mark Addy. Young's presence serves no purpose other than to remind anyone who recognizes him that the original film is much better than this mediocre movie.

I couldn't help noticing that all of the Eloi were played by non-Caucasian actors. I don't know if this was an attempt at making some kind of sociological statement on race by the filmmakers as this fact isn't commented on in the script. But on the surface at least, it seems to imply that whites evolved into the Morlocks.

Screenwriter David Duncan gave the story a happy ending, which, as Scott wrote, is not how the novel concludes. What he really needed to do was to add a few more action scenes. I don't always share Eric's opinion but I am in complete agreement with him on this one. The Time Machine is a mediocre remake.