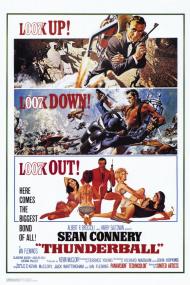 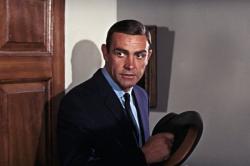 Thunderball, the fourth film in the Bond series, is best remembered as the one with all the underwater scenes. It also contains what has now become the most cliched of all the Bond plots. S.P.E.C.T.R.E. captures two atomic bombs and holds the world for ransom. Not for one million dollars as Dr. Evil would ask for, but for 100 million pounds. The cliché that this is the plot for all spy movies is helped by the fact that this movie was remade as the later Bond film; Never Say Never Again. Thunderball is also the last of what I would call the classic Bond movies. Future Bond films would be guilty of greater and greater excess and outlandish plots, but the first four movies, while highly improbable, are all at least plausible.

The trail Bond follows in pursuit of the stolen bombs leads him to the Bahamas where he and the villains go scuba diving in many scenes. These underwater scenes were a bit of a novelty at the time and they won a few awards. Now though, they tend to slow the movie down. The filmmakers were obviously besotted by their new underwater camera toys and each scene where they're used goes on too long. There's also a pointless subplot at the beginning of the movie involving a pilot being replaced by someone who has had plastic surgery to make them look exactly like the pilot. This impostor is the one responsible for piloting a stolen plane containing the atomic bombs into S.P.E.C.T.R.E.'s hands. Why not just have the original pilot be the one who steals the plane (as it is in the book)? I mention this because like a lot of Bond films, this one runs on for too long. Bond films shouldn't be epics. They work best as fast-paced action films with a dash of sex and charm thrown into the mix.

What everyone wants to see in these movies is James Bond in action; either seducing beautiful women or outwitting the bad guys. When Bond is on-screen this movie excels. Connery is still on form here and he's as suave and as deadly as ever. One of my favorite moments in this movie is when Bond returns to his hotel room and discovers this movie's bad Bond girl, Fiona, naked in his bathtub. "Get me something to wear," she says. Bond promptly hands her just a pair of shoes, with a devilish twinkle in his eyes. He has a few other great moments and throwaway one-liners as well. "I think he got the point," he says after shooting a villain with a spear-gun. When Fiona says, "Some men don't like to be driven," he replies, "No, some men don't like being taken for a ride."

Both of the Bond girls, the good, Domino, and the bad, Fiona, are attractive, but Fiona is the more interesting. She also has one of the most magnificent pair of breasts of any Bond girl. While her part is upstaged by Barbara Carrera's Fatima Blush, which is essentially the same part in the remake, Never Say Never Again, she's still quite good and the first of the truly bad Bond girls. Pussy Galore in Goldfinger, while working for the villain, is really only doing it for the money and changes sides at the first opportunity. A change of sides that Fiona mocks in this movie when she laughs at Bond and tells him that just because she's made love to him doesn't mean she's joining the good guys.

One thing that the Bond movies have never gotten right, even these early classics, is the character of Felix Leiter. He appears in 3 of these first 4 Bond films and each time he's played by a different actor and each time he's underused. In this movie particularly he is nothing more than Bond's manservant. He chauffeurs Bond around and generally just follows his lead and his orders. In all the years the Bond movies have been around they've never gotten this character right. He's supposed to be, according to the Ian Fleming books, younger than Bond, a jazz lover, blond, humorous and Texan. 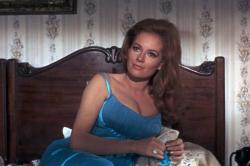 Luciana Paluzzi and her memorable mammaries.

I think Thunderball, does have some needless excesses. At the heart of Thunderball is a decent enough story but it seems as if the makers of the film were busy adding Bondisms and gadgets and girls just for the sake of it being a Bond movie.

I have not counted, but this movie seems to have the most women in it. It is as if girls were thrown into the movie just for the sake of having plenty of them to look at. The movie opens with Bond and an attractive French agent. She serves no purpose other than for Bond to suggest they may have sex later. There is the nurse he sexually harasses and blackmails into having sex with him, but of course she ends up liking it so it is okay. Then there is the sexy agent in the Bahamas, and the evil Fiona who he has sex with only “..for Queen and country.” Of course there is also the bad guys girlfriend, Domino, who he has sex with underwater. “I hope we didn't scare the fish.” He says afterwards.

As Scott mentioned, Thunderball has some memorable lines. The one he did not mention was after Bond placed a dead girl, he was dancing with, at a table, he says to the other occupants, “Do you mind if my friend sits this one out? She's just dead.”

The gadgets are at a minimal. The big showing one though is the jet pack. It is one of my biggest complaints about the movie. After noticing that the widow at the funeral is actually the man supposedly dead, Bond grabs the French agent and says, “Come on”. They race to the bad guys mansion where they get there ahead of him. Bond fights and kills him. To escape, he gets on the mansions roof and flies away on a jet pack. They had to race there to beat him. How in the hell did they get a jet pack on the roof? In a mid seventies Roger Moore movie I would not have complained, but this movie has Bond fight people by tripping them and sneaking under ships to take pictures. This is a Bond movie that is done, for the most part, realistically.

My other complaint is the final battle aboard the Disco Vilante. James and Largo are having it out on the bridge while the speed boat zooms near rocks. For some reason the director decided to speed things up to make it all seem more exciting. It does not work. It just looks all that more fake. James is fighting for his life with just his fists. Why is that not tension enough? The one saving grace for that scene is the music. It is a very repetitive piece that I was still whistling twenty minutes after I turned the DVD off.

Thunderball is not the best James Bond movie but it could have been, had the makers of the movie just stayed more faithful to the premise and not tried so hard to please fans by adding extra stuff that was not needed.

Thunderball makes great use of the scenery of both the human and tropical variety.

Clearly after the brilliance of the first three Bond movies there was nowhere to go but down. I agree that this one drags a bit in places, especially during the first half hour or so. And the line between reality and fantasy was definitely starting to blur. Eric, I too wondered about how the hell the jet pack got there; it foreshadows the Roger Moore Bond era.

Connery is great as usual as the suave British agent. He was ridiculously handsome and still in great physical shape in 1965. And he seems to have grown more confident with each passing movie. His performance here as 007 is at its pinnacle of cocky charm. He is deadly but oh so sophisticated. At dinner with a beautiful woman watch how he casually orders, “Beluga caviar and Dom Perignon ’55” without sounding at all pretentious.

The underwater scenes are nicely shot but they do seem to go on forever. I’m surprised neither of my brothers mentioned the sharks. I wasn’t sure if I had ever seen this movie as a kid until they showed up. I have definite memories of the scene where Bond gets trapped in the pool with them and has to swim through the underwater tunnel.

Thunderball could definitely have benefited from a tighter edit job. I also concur about the American CIA agent. They couldn’t find anything heroic for him to do? As Scott observed he is little more than a glorified chauffer for the famous superspy and I had no idea he was supposed to be from Texas.

The cinematography is gorgeous; the movie makes great use of the breathtaking beauty of the tropical setting. The finale aboard the musical-sounding Disco Volante is fairly exciting if needlessly sped up (again, I am in agreement with Eric).

Thunderball with any other Bond actor would be one of their better entries; with Sean Connery it is solid but inferior to his first three outings as Bond, James Bond. 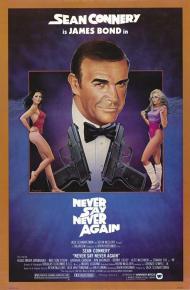