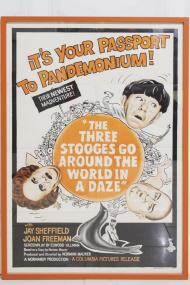 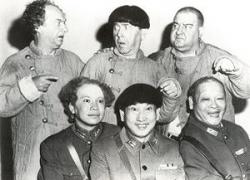 Larry, Moe and Curly Joe with their Chinese counterparts in The Three Stooges Go around the World in a Daze

Moe, Larry and Curly Joe are loyal servants to London aristocrat Phileas Fogg III, whose grandfather went around the world in 80 days on a £20,000 bet with his valet, Passepartout. Phileas Fogg III (Jay Sheffield), who is as anal about his schedule and routine as his ancestor, takes a bet to repeat the trip only this time without any money what-so-ever. Moe insists that they go with him stating as, “born chiselers” they will be a great asset. An excited Larry states, “Oh, boy! We're going around the world on our wits!” Moe adds, “With your wits, you won't get past the front door.”

The four stow away on a cargo ship and begin their globetrotting zany adventure. They are pursued by two bank robbers who want to kill Phileas Fogg and Scotland Yard who thinks he robbed the Bank of England before departing. While hiding in a train car in India, Fogg and the Stooges rescue Amelia Carter (Joan Freeman), an attractive American tourist who had just been abducted. Fogg and Carter, of course, fall in love. Together the five journey through India, China, Japan, the United States and Canada before making their way back to London.

Most of the Three Stooges feature length movies were little more than a series of skits strung together. With The Three Stooges Go around the World in a Daze we have a solid story and plot. Some of their best moments though are skits they pulled out of their closet.

While in India, Curly Joe pretends to be a near blind Maharajah who cannot speak English. Moe speaks gibberish to him, “Maha?” “Yaha” “Raja!” then translates to the clueless audience. The scene climaxes with Curly Joe throwing knives at a very frightened Larry. The skit was originally done years before with Curly as the blind Maharajah. There is also a running joke of Larry playing "Pop Goes the Weasel" on a coronet to rile up Curly Joe whenever they need him to fight. It was originally done in a Curly short with Larry playing the same song on a violin. In another scene they hide in the back of a moving van they set up like a living room with the furniture inside, much as they had in another Curly short.

The combination of an upper class British young man and the low class Stooges makes for good chemistry. Compare Sheffield’s British accent, “Dash it all I’m jolly good you feel that way.” and their Brooklyn accents, “Four days directly to New York and here we ah thanks ta you.” At one point the Stooges pretend to have English accents but they are only good enough to fool the characters on screen.

The very best scene is when the five travelers are taken prisoner in China for being spies, Fogg demands that he is treated with respect as he is a British citizen while the Three Stooges are sent to be brain washed, with none to surprising, yet hilarious, results. It is not a scene I had seen before. During it, a Chinese man starts to poke another guy in the eye but Moe stops him, stating they do not do that anymore.

The Three Stooges Go around the World in a Daze works on nearly every level. It was unfortunately all shot in California instead of around the world. Still, it is easily the best of the Three Stooges’ feature films and the one I most recommend. As a final note, not only was this directed by Moe's son-in-law but the boy who steals Larry's coronet is Moe's grandson.