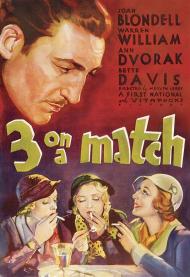 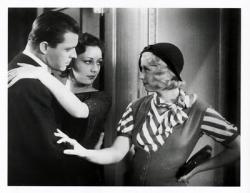 Lyle Talbot, Ann Dvorak and Joan Blondell in Three on a Match.

Three on a Match is a graphic and realistic look at the lives of three young women from the years 1919 to 1932. The story follows them from carefree school days at Public School 62 in New York City through graduation and into early adulthood where they lose touch with each other. The story then skips ahead to 1930 where the three women meet up again and reminisce over lunch. When one of them lights all three of their cigarettes with a single match, they quickly laugh off the popular superstition that one of them will soon die.

The three main characters are all very different. Joan Blondell is Mary, the bad girl in school who cuts class to smoke with the boys. Later she winds up in reform school and then goes into show biz. Ann Dvorak is Vivian, the stuck up and pretty, popular girl. She snags a successful husband and has an adorable son, but seems completely bored by her lot in life. The third friend is Ruth, the valedictorian of their class, now an ambitious career girl. She has the smallest part in the movie but is played by the great Bette Davis. At this stage in her career she could still play soft and vulnerable and was actually fairly striking to look at, most notably in a scene at the beach.

This movie has a few other famous faces in supporting roles. The always-debonair Warren William plays Vivian's understanding husband. A virtually unknown Humphrey Bogart has a few scenes as a ruthless gangster, and Auntie Em herself, Clara Blandick has one brief scene as Mary's mother.

Thanks to the uncompromising script, and raw direction by Mervyn LeRoy Three on a Match holds up well today in terms of content and style. It is very un-Hollywood in the fact that it deals openly and unsentimentally with such unpleasant topics as adultery, kidnapping, child-neglect, drug addiction and suicide. The climactic scene will shock you.

It is also quite nostalgic as it uses newsreel footage, snippets of popular songs and newspaper headlines to mark the passing years.

Three on a Match runs just over an hour, but manages to pack in a whole lot of detail and drama, with first-rate acting throughout. This movie proves that certain societal problems that we think of as new or modern, have, in reality, been with us for a very long time. 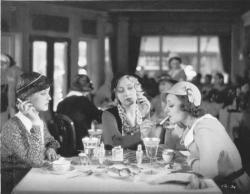 Bette Davis, Joan Blondell and Ann Dvorak in Three on a Match.

This is the type of movie that truly makes me lament the Hays Code.  Because of the Code, there's stuff in this movie that you wouldn't see come out of Hollywood again for another 25 to 30 years. This gives it an odd, timeless quality.  Certain plot elements seem modern, but obviously it was filmed 80 years ago.

Speaking of holding up well, there's one scene that could have been lifted directly out of a Sex and the City movie.  When the three female leads first reunite as adults, they have lunch together and you can't help but compare Vivian to Charlotte, Mary to Samantha and Ruth to Miranda.  They talk and gossip about life and men and it just goes to show you how little people have changed.  It also goes to show that women were damaged more by the Hays Code than men were.  Before the code they were allowed to be good, bad or both good and bad.  After the code they had to fit into some idealized version of womanhood or suffer the consequences.

A lot of the early talkies were fairly short.  This one barely runs an hour and while I appreciate brevity, it should have been longer.  Bette Davis's character deserved more screentime and Vivian seems to disintegrate too quickly and too far (almost comically so), without enough explanation.  I would have enjoyed more character development.  It shouldn't have been an epic, but even just twenty minutes more would have been enjoyed.

The three women all do great jobs in their parts.  I thought Warren William was a bit stiff and his performance more dated.  The little boy with the Shirley Temple curls is a little too cutesy.  Bogie is menacing as the gangster thug in his small part.  You certainly believe that he'd be willing to do the things he threatens to do.

The cast of Three on a Match.

As my brothers wrote, this film deals with subject matters that were ahead of its time. What makes this film dated is the attitude toward Vivian and Robert's son. After Vivian starts her affair, Mary and Ruth offer to take in Vivian's son. They do not even consider that as the father, Robert could take care of a child on his own. After he gets him back, Mary and Ruth step in as surrogate mothers.

Like Scott, I felt it needed a little more explanation. Early on Vivian avoids having sex with her husband. He is wealthy. They have servants and a beach house. They go to parties. She does not work at all, yet is still unhappy. The movie never says why. At one point, Ruth says, "It must be a grand feeling to get everything you want." Vivian apparently never knew what she wanted.

The movie seems to race through the story. When the boy is kidnapped it goes from him walking away with a stranger, to the police being mobilized in search. He was at a park with Bette Davis, who was distracted by a book. Why not show her panic when she looks up to realize he is gone? She was always noted for her dramatic flair. Her small role is almost pointless.

As Patrick wrote, the end did shock me. I have never seen a film from this era with such a scene, and as Scott mentioned it would be decades before another would be filmed again.