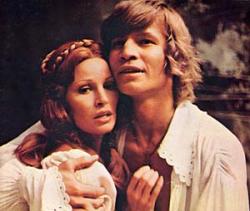 Raquel Welch and Michael York in The Three Musketeers.

I love that Richard Lester uses location shots so well. The Three Musketeers and it's sequel, The Four Musketeers, were both filmed in Spain, substituting for France and England. It must have been a favorite locale for him as Spain also stood in for Rome in A Funny Thing Happened on the Way to the Forum. All of these films have a very authentic look to them, and most importantly, The Three Musketeers does not look dated in the least.

A young French swordsman, D'Artagnan, leaves his parents country home for Paris, with dreams of becoming a member of the king's musketeers. He accidentally ticks off three musketeers separately, Athos, Porthos, and Aramis. They each challenge him to a duel, but when D'Artagnan helps them fight the Cardinal's soldiers he becomes their friend.

D'Artagnan gets a man servant and takes up residence in a disgusting little apartment because he finds himself attracted to the landlord's clumsy wife, Constance. She is a confidant of the Queen, who is having an affair with a British Lord, with whom France is at war with. Cardinal Richelieu knows of the affair and tries to make a power move by outing the Queen's disloyalty. He hires the evil Lady de Winter to steal two of the gems that were given to the Duke by the Queen, thus proving her infidelity. Through Constance, D'Artagnan learns of the situation and with the help of the three musketeers, they race to England to retrieve the gems to save the Queen's reputation.

The Three Musketeers has an amazingly quick pace with lots of action scenes. The sword fights and the acrobatics are as good as they come. Although the action is all taken seriously, it contains plenty of humor as well. To get to England, D'Artagnan steals a pass to get on a ship. He is stopped at the gangplank by a guard, "This pass is for one person." He says gesturing toward D'Artagnan's man servant. "I am only one person. He is a servant." D'Artagnan responds. They are allowed on board. The ever drinking Athos offers this advice, "You will find, young man, that the future looks rosiest through the bottom of a glass."

The Three Musketeers is a completely fun film. Like Raiders of the Lost Ark and A Knight's Tale, it combines action/adventure with comedy without sacrificing either. It does not have depth or hidden messages. It is simply the epitome of movie entertainment. 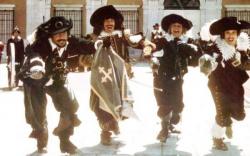 I couldn't agree more. Richard Lester's inspired direction superbly blends thrilling adventure with fast-paced comedy. The result is arguably the most purely entertaining of the many cinematic adaptations of Dumas' legendary novel. The cast is filled with famous faces, some of whom are in small roles, like Charlton Heston who has only a few scenes as Cardinal Richelieu. The sword fighting stunts are imaginative and plentiful. The look of the entire production is exquisite. This is a nearly perfect movie.

Michael York, whom I've never really thought of as an action star, is fantastic as the young adventurer leaving home for the first time. He brings to the role of d'Artagnan the perfect combination of wide-eyed innocence and youthful cockiness. He handles the many action scenes as well as he does the comic bits. His d'Artagnan prefers climbing walls to using stairs, and he never saw a rope or curtain he didn't want to swing from. Within 20 minutes of his arrival in Paris this rube has already made an enemy of Count De Rochefort (Lee) and challenged all three of the titular musketeers to duels.

As Eric pointed out, in addition to the numerous inventive acrobatic stunts, the script also contains many funny lines and slapstick sight gags. One example of the latter is the scene where Constance (Welch) is attempting to elude Rochefort and his men. She hides behind an enclosed litter being carried through the streets of Paris. Of course her ample breasts are at just the right height to poke through the opening in the side of the litter, momentarily surprising and delighting its male occupant. After d'Artagnan has rescued Constance, he attempts to seduce her. “They dragged me from my bed.” She explains. To which he replies, “Bed? That's the best place for you, bed.”

Of the musketeers, Oliver Reed is the standout as the world weary Athos, concealing a mysterious past. Richard Chamberlain and Frank Finlay are well cast as the dashingly handsome, skirt-chasing Aramis and the good-natured, gluttonous Porthos, respectively. And if you've ever desired to see Raquel Welch fight Faye Dunaway, while both are dressed in bodice fitting period costumes, then look no further. This is the movie for you. As Eric succinctly put it, Richard Lester's The Three Musketeers is a completely fun film. 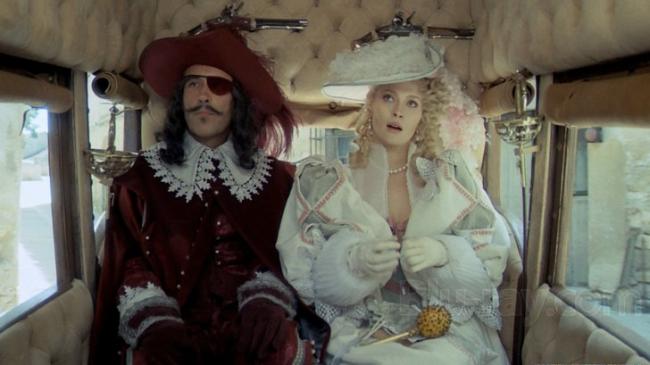 Christopher Lee and Faye Dunaway in The Three Musketeers.

As my brothers noted in their reviews of the sequel to this movie, the cast and crew were unaware that the finished film would be split and released in two parts, despite them only getting paid once. This lead to the inclusion in all future contracts overseen by the Screen Actor's Guild of what has become known as the Salkind Clause-so named for the producer of this film-that states up front how many films are being produced. The actor's protest and the need to film some additional pickup shots for the sequel eventually lead to an increase in pay for the cast, but still not as much as they might have earned for two separate films. As my brothers also noted, while the sequel only makes sense after watching this first installment, this original film is able to stand alone and feels complete in and of itself.

Although, I too enjoyed this movie it was clearly at a lower level than my brothers. It has many things going for it, but I found the tone slightly uneven, with the slapstick undercutting any would be tension. While it's amusing as hell at times, a little more restraint would have increased the sense of danger. There's just a little too much falling about and director Richard Lester is too enamored of the sight gag as he threw in numerous little jokes, many of them related to the offbeat technology of the times.

Lester was originally brought on board back in the 1960s when the idea was to cast (or should I say "miscast") the Beatles in the lead roles. Lester had already directed the Fab Four twice in Hard Day's Night and Help and seemed a natural fit to do so again. Although that idea never went anywhere, Lester stayed with project. He does, as Eric said, make great use of locations and the look of the film is quite authentic. Although I would add that while Spain might make a suitable stand-in for France, the wide shots in "England" make it obvious it was filmed somewhere further south.

The cast is quite good and stuffed with well known faces. Michael York is as good as Patrick said. He has just the right amounts of swash and buckle to carry the film. He is the only character with any kind of depth or story arc. Athos, Aramis, and Porthos, despite being played by some acting heavyweights (or at least 2 out of the 3), are strictly there for the laughs and come across rather bumbling. Faye Dunaway hints at depths as Milady, but she doesn't really come into her own until the second film. Heston is suitably menacing in the background. Welch is charming and voluptuous as the klutzy Constance. And the recently deceased Christopher Lee is appropriately villainous as the eye-patched Rochefort.

Perhaps I sound too harsh regarding this movie. It is quite a bit of fun after all. Maybe just too much fun, especially in regards to the slapstick. Without a harder edge and a real sense of danger the stakes feel low and while I laughed at these characters, I never felt more than passing amusement for them. 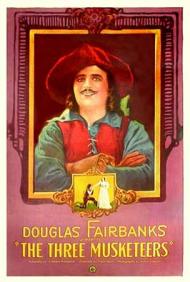 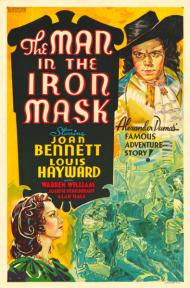 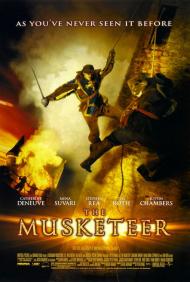 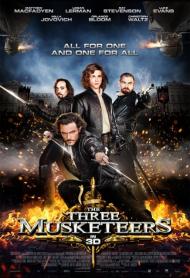