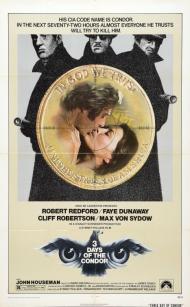 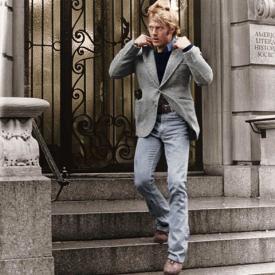 Robert Redford in Three Days of the Condor.

Some of the best thrillers are the ones that are at least plausible. When the threat is real and you can picture yourself in the same situation as the hero and wonder how you would react under the same circumstances, it definitely makes it easier to relate to compared to something like James Bond. Three Days of the Condor is definitely that type of film.  It's a solid, if somewhat dated, spy film that is elevated thanks to director Sydney Pollack and its talented cast, lead by Robert Redford.

Redford plays Joseph Turner, an employee of the CIA, but only as an analyst. He works in an office in New York City where he and others read and analyze (with the help of computers) anything and everything published in the world. They look for patterns, codes and ideas that might be hidden in books, magazines or newspapers.

One day, when Turner returns to the office after collecting lunch, he discovers that everyone in the building has been murdered. Scared and confused, he runs to a phone box and calls into the office with his code name of Condor. When he's told to meet another agent in an alley though, he's shot at and barely escapes with his life. Now he doesn't know who to trust or who it is that killed his fellow readers. Was it an external or internal hit and who'd want them all killed anyway? And most importantly, can he find out and save himself before it's too late?

What keeps the story so compelling is that Turner is an academic and not an agent. He's in way over his head and is struggling just to stay alive. Redford looks more like a young professor, the one all his female students have a crush on, than he does a killer. He does have some training and he learns fast, but you're never sure he's going to be able to pull it all off.

A young and beautiful Faye Dunaway is thrown into the mix as a woman Turner kidnaps at gun point. He forces her to take him to her apartment so he will have some place to spend the night where no one will suspect. Although it's hinted that she's a lonely and possibly depressed girl with self-esteem issues, the fact that she falls so quickly in love with Turner, is probably the plot's weakest point. As their sex scene is easily the most dated of scenes in the manner with which it is filmed. And the resolution of their relationship is abrupt and unsatisfying.

Max Von Sydow fares much better as the hired assassin who is sent to kill Turner. He's a cold fish who does his job without feeling, merely offering his services to the highest bidder. It's all strictly business to him, although eventually he finds himself gaining some respect for his target as Turner manages to stay alive far longer than anyone thought he would.

Good use is made of several locations in New York City and you get a feel for the gritty 1970s city. Several scenes are set in the then newly finished World Trade Center. The authentic locations definitely help with atmosphere and the sense of realism in the story.

My only real complaint is the ending. It's left open ended and with room for a sequel, which was never made of course. The story does end, but I wanted to know what was going to happen next, which is a good sign, I suppose, but not very helpful.

Faye Dunaway and Robert Redford in Three Days of the Condor.

Yeah, this is a solidly entertaining mystery/thriller with a good cast. The action kicks in early on in the movie and the story remains engrossing right up to the end. I agree that the relationship between Redford and Dunaway is the weakest aspect of the plot. I guess Pollack figured there was no way he could have these two gorgeous movie stars in the same film without including a bit of romance. Audiences would have expected it and he didn't want to disappoint them. But it adds nothing to the story and, as Scott wrote, the manner in which their sex scene is filmed is easily the most dated aspect of the movie.

Redford is good in the lead, although he is a bit superhuman for a guy with no field training. He's one hell of a fast learner, that's for sure. Despite his exceptional movie star looks Redford was always able to project an average guy appeal. He handles the action scenes well enough, especially the fight with the bogus mailman in Dunaway's Brooklyn Heights apartment. He also gets a few memorable lines. When he is told by his superiors -over the phone- that the man he is supposed to meet in a designated alley will be carrying the Wall Street Journal, he replies, “I'm not going into any alley with you or anybody. And fuck the Wall Street Journal!” It's a clever, tension-breaking bit of levity in what is for the most part a deadly earnest story.

As my brother mentioned, New York City of the 1970s is on full display. There are some great shots of the World Trade Centers as well as the Brooklyn Bridge and Central Park among other iconic locales. Like The French Connection before it, this movie is set in the city at the holidays. The festive decorations in the background along with the Christmas carols heard throughout the movie provides a sharp contrast to the events of the story in this grimy, gritty metropolis.

Again concurring with my brother, I was impressed with Max von Sydow as Joubert. He makes this deadly assassin for hire an intriguing character you'll want to know more about. He gets a great scene at the climax where the intricacies of the plot are finally revealed to Joe Turner by Joubert. When Joubert suddenly and unexpectedly kills another man in front of him, Turner asks, “Why?” Joubert answers without a trace of human feeling, “I don't interest myself in "why". I think more often in terms of "when", sometimes "where"; always "how much".” The supporting cast also includes memorable turns from Cliff Robertson and John Houseman.

Sydney Pollack and Robert Redford made a great director/actor team-up. Three Days of the Condor is one of their best movies. In style and theme it reflects Pollack's admiration for Alfred Hitchcock, most specifically in its similarities to North by Northwest. The script also takes full advantage of the cynicism that had crept into the American psyche during the Vietnam War and the subsequent Watergate scandal. Three Days of the Condor is considered to be an early example of the sub-genre of film dubbed the techno-thriller. It's a taut and suspenseful movie well worth checking out.

Robert Redford and Cliff Robertson in Three Days of the Condor

As Patrick noted, Three Days of the Condor was a comment on the cynicism that had crept into the American psyche because of The Vietnam War, Watergate and, I will add, the assassination of JFK. Roger Ebert made a similar remark in his review written when this movie first came out, “How soon we grow used to the most depressing possibilities about our government.” At one time, if you questioned the government you were likely called paranoid, today if you trust the government I would call you naïve.

Although made 40 years ago, Three Days of the Condor still politically echoes today. Ever since Vietnam, conflicts around the world seem more and more complicated. All of the fighting in the Middle East has been bogged down with questions of who is and who is not the actual enemy. At one point in the movie, Cliff Robertson listens to John Houseman talk about the World Wars, before asking him, “You miss that kind of action, sir?” Houseman answers, “No, I miss that kind of clarity.”

The movie really sounds contemporary when the light bulbs turns on in Redford’s head, “Oil fields. That’s it. This whole damn thing is about oil.” Did we not hear that rhetoric over and over about our military presence in the Middle East when Bush was President? Of course, once Obama became commander in chief, those accusations disappeared from the mainstream media, even though he has maintained a military presence there his entire presidency. This leads me to my next point.

Unlike Scott, I liked the end. Spoiler alert: Redford confidently tells Robertson that he has told his story to The New York Times, thinking he has won. As Redford walks away, Robertson yells, “How do you know they'll print it? You can take a walk. But how far if they don't print it?” Redford continues to walk away stating, “They'll print it.” Robertson somewhat confidently repeats, “How do you know?” The shot then freezes on Redford’s face staring back at Robertson. I mean, it is not as if the government has influence on the media, right?

As someone who stopped trusting governments since I read George Orwell's "1984" in high school, I enjoyed Three Days of the Condor from start to finish. The only weak aspect is, as my brothers wrote, Redford’s relationship to Dunaway. He kidnaps her, invades her home and threatens her, so of course she is turned on and wants to have sex with him. It is the closest to a James Bond moment this movie gets. I also found her morning after line more odd than funny. “Oh no, I'll help. You can always depend on the ol' spy fucker.”

This is easily one of my favorite Robert Redford films.