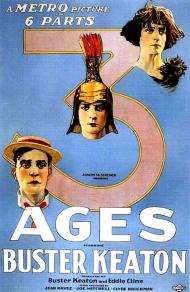 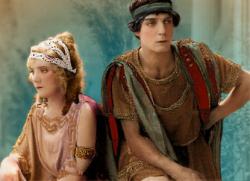 Three Ages is Buster Keaton's first feature length film as a director.  It is also one of the few silent films outside the ones he made with Fatty Arbuckle, in which he has a famous co-star, Wallace Beery.  It is a landmark film in his career, but not actually his best.

This movie tells three love stories at once.  All three star the same actors.  They take place in the Stone Age, the Roman Age, and the (then) Modern Age.  In all three, Keaton and Beery compete for the affection of the same girl.  in the stone age, Keaton rides a dinosaur and plays golf.  In the Roman Age he gets into a chariot race with Beery, with Keaton using a dog sled.  The Modern Age ends with a football game with Beery and Keaton on opposing teams.

Keaton was known for his use of groundbreaking special effects, but here he has a couple of cheesy scenes.  The stop action dinosaur and the stuffed lion are too obvious to even be funny.  The scenes of ancient Rome though are fairly spectacular.  Did they build those huge sets just for this comedy, or were they left over from some other film production?

The gimmick of the three ages is unique but gets tiring very quickly, although the pace gets better as the movie goes on.  The best scene in the Stone Age is when Buster flirts with a huge woman to make his girlfriend jealous.  Although the lion is very fake, Keaton's reaction to it is hilarious, as he gives it a manicure.

In all three ages, the suitors must deal with the girl's parents.   In the Roman Age her dad says to Beery, "Thou rankest highest in the Roman army,"  Then to Keaton he says, "And thou art the rankest."  During the Modern Age the girl's mother insists on knowing the size of each man's bank account.

Co-directed by Eddie Cline and written with guys who would go on to write more films with him, Three Ages was a learning experience for Keaton, and a sign of greater things to come. 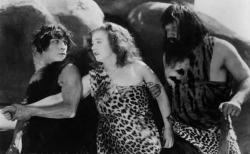 As Eric wrote, this was Buster Keaton's first feature length movie as a filmmaker. He had previously acted in The Saphead, which was feature length, but this was his first try at an hour long comedy as producer, director and star. He later admitted that he purposely set it up as three inter-cut two-reelers in the event the movie flopped (it didn't), in which case he would have released the stories separately as shorts. It is a lighthearted parody of D.W. Griffith's landmark film Intolerance, only rather than showing hatred throughout the ages this movie shows how romantic love has remained unchanged over time.

My favorite section was the Stone Age. Eric mentioned the scene with the very tall woman whom Keaton attempts to use to make his true love jealous. It is quite funny. Sure the dinosaur is incredibly fake looking but it is still worth a chuckle or two. Like Eric, I am curious to know if the sets for the Roman Age were built specifically for this picture. They are quite impressive. And just like in Intolerance, the Modern Age scenes are now a period piece as well, representing the early 20th Century.

The most impressive stunt in the movie comes during the climax of the Modern Age story. Keaton attempts to leap from one building to another while being chased by the authorities (there is always a chase scene). In real life Keaton just missed the edge of the wall after he made the daring leap. He fell into a net off-camera and was injured badly enough that he couldn't work for a few days. After watching the rushes he decided to leave the miss in and then created an elaborate fall for the movie where he winds up sliding down a firehouse pole. Like so often happens in film, a mishap or mistake was turned into inspiration.

As I watched the scene in the Roman Age where a thug plots with Wallace Beery to lure Keaton to fall into a lion's den I thought I had spotted a young Oliver Hardy. It turns out that I am not the first person to make this mistake. It was actually another rotund comic actor named Kewpie Morgan.

Eric is right, Three Ages isn't Keaton's best work. Not by a long shot. It did, however, allow him to successfully make the leap to feature length movies just as they were replacing shorts as the most popular form of film comedy. As such it is indeed a landmark film in his unparallelled career. 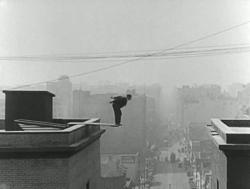 Buster Keaton made the leap into feature films with Three Ages.

Even if this isn't Keaton's best ever film, it's still very good. It's fast paced and quite amusing throughout. While it is a feature film by length, it really is three shorts edited together rather cleverly with a connecting theme. Of the three, I enjoyed the modern storyline the most.

I knew that this was a parody of Intolerance, but was unaware until reading about this film that it's a parody of Griffith's work and style in general. For instance, the scene in this film where stone age Buster embeds a rock in his club to defeat Wallace Beery in a fight, was lifted directly from Griffith's 1912 short, Man's Genesis. Even the title cards mock Griffith's flowery language with such lines as, "A troubled heart ever yearns to know the future." Being familiar with the father of American filmmaking adds another layer to the film, but isn't essential to your enjoyment. It's funny no matter what your level of knowledge.

The cheesy special effects don't detract from the humor, they actually enhance it. I thought the scene with the lion in the Roman section, which was actually my least favorite of the three, was one of the funniest scenes in the entire film. If it had been a real lion, or even a realistic one, the joke wouldn't have worked nearly as well. And the visual joke with the dinosaur still made me laugh, even if it is obviously animated. How else would they have included a shot of a dinosaur in a film of the times? If you're going to complain about the quality of special effects from 1923, you might as well point out that by the stone age, all the dinosaurs were long since extinct.

Keaton's female co-stars were never required to do very much, but his leading lady in this film, Margaret Leahy, does even less. She was the winner of a beauty contest, set up by producer Joseph Schenck, in her native England, where she reputedly beat out 80,000 other contestants. Schenck brought her to Hollywood on a three year contract and put her in a drama, from which she was fired for being unable to act at all. In an effort to get something back for his money and effort, Schenck pawned her off onto Keaton, his then brother-in-law, for this film. It would turn out to be the only movie she ever made.

Perhaps not Keaton's absolute best, but I still enjoyed it much more than I did Keaton's other feature from 1923, Our Hospitality. 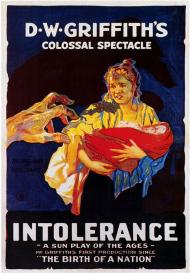