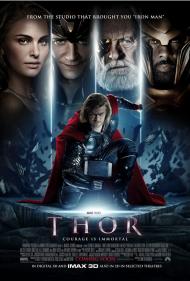 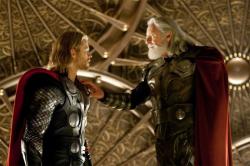 Thor is the arrogant, mighty son of Odin and heir apparent to the throne of the amazing realm of Asgard.  After disobeying his father he is cast out and sent to Earth.  He has no super powers and cannot even use his Hammer until he learns some humility and to think of others before himself.

He meets Jane Foster.  Portman plays the hottest scientist since Denise Richards played a Nuclear Physicist opposite James Bond.  They instantly have eyes for each other.  The best scenes are when Thor first arrives on Earth and still acts like the son of a mythological Viking king.   After trying coffee for the first time in a diner he says, "This drink... I like it! More!"  He then smashes the mug to the floor.  When he needs a ride he walks into a pet store and demands a horse.

This portion also contains the most yakking and could have trimmed a few moments.   However it also has the best action scene when some Asgardian friends come looking for Thor, followed by an Asgard guardian known as "The Destroyer."   The scene where Thor gets his hammer back is the finest in the film, but it lacks something.  Thor needed a line there announcing his return to power.

Interesting to note is that the film, at no point, refers to Thor, Odin or anyone else as a "God."   At one point Jane and her friend Darcy suggest the the people of Asgard were mortals who found a magic bridge to another world and were later worshipped by Vikings as if they were deities.  No doubt this was intentional, but who did they think they would offend by calling them as such.  The comic book was very clear on the fact that they were the mythological Norse gods.   My best memory from any Thor comic book is when Odin comes to Earth to stop another God from doing something.  He appears in a brilliant flash of light with his staff in hand and announces that he is Odin and that the will and the  way have come.

Hemsworth does a fine job in the lead.  He has very little to do other than fill the costume.  Clearly the hardest work he had to do for this role was to hit the weights.  Portman made some easy money here.  She practically phones in her role, but that has more to do with the fluff of the story than her actual performance.  The Black Swan this ain't.

Brannagh deserves credit for the look of this movie, especially Asgard.  It has plenty of details and is awesome to view.  The actions scenes are fun if not very long.  A better job on editing and this film would have benefited greatly.

My favorite line in the entire film is spoken by Jeremy Renner in a cameo appearance as Marvels answer to Green Arrow, Hawkeye.   He is above a compound that Thor is breaking into to find his hammer.  Thor is taking down one guard after another.  Hawkeye asks agent Coulson, "Do you want me to take him down or would you rather send in more guys for him to beat up?"  The Avengers is looking better and better.

Natalie slums it for a paycheck in Thor.

As shown in this movie Eric, the Asgardians aren't gods, although, yes the movie does suggest that earthlings did once worship them as such. Interestingly the marketing material for the film doesn't hesitate to refer to Thor as a God. But as shown here, these guys aren't even immortal, although they obviously can live a long time. One of the plot points is the impending death of Odin, which should be impossible, surely?

Eric, you say that Hemsworth does a fine job as Thor, but frankly all he does is fit the costume. I mean, yes, he looks the part and he's about as cut, ripped and buff as it's possible for a mortal to get, but he completely lacks charisma beyond the physical. He's as dull as a box of rocks. I never empathized or really rooted for him. Renner has more spark in his two minutes of screentime as the future Hawkeye, than Hemsworth does in over two hours.

Although not entirely Hemsworth's fault, I also never bought into his relationship with Jane. Has Thor never met a woman before? He meets Jane, has one night's worth of conversation with her and suddenly he's humble? I mean yeah, Portman is hot, but she's not excessively charming here. Apart from showing him a little kindness, what is it about her that makes Thor pine so strongly for her?

And speaking of Portman, not since Halle Berry played CatWoman, has the reigning Best Actress Oscar winner gone from such dramatic material to such an "in it for the money" part. Not that this part is as horrible as Catwoman, but it's such a generic part that absolutely any attractive actress could have played it.

The action scenes are well filmed. Hemsworth is best when he shuts up and looks good. There needed to be more of them. Thor battling his way to his hammer was one of the best moments because at that point he's basically human. When he has his full-on Thor powers, you know that there's no way he's going to get hurt.

Eric, you praise the look of Asgard, but the costumes and makeup looked pretty campy to me, especially when Thor's friends show up on Earth. The look of Asgard, Hopkins over-the-top acting, Rene Russo as Odin's wife, and the obvious casting of the gods to include as many nationalities as possible all adds up to some almost, but not quite fun campiness.

Frankly, I was bored quite a bit by this movie. I was never drawn in emotionally and so never cared what happened to anyone. So long as the action was happening it was fine, but whenever it stopped to allow anyone to talk, I started to yawn. Eric, you say that the scene where Thor got his hammer back was lacking something and I agree. It, like the rest of the movie, is lacking an emotional impact. 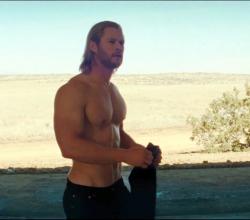 I prefer campy superhero movies to serious ones. For me Thor worked best when going for laughs. Like you Eric, I liked the fish-out-of-water scenes with Thor on Earth. He refers to it as a “realm” and walks out into traffic without a second thought.

The FBI men are likewise played with a light touch. Upon seeing Thor’s fellow Asgardian warriors one of the men in black deadpans, “I see Xena, Jackie Chan and Robin Hood.” Still the campiness could have been played up even more.

I agree Scott about Anthony Hopkins’ hammy performance. He thinks he’s doing Shakespeare in the Park. Also like you I never bought the relationship between Thor and Jane. The amount of time they spend together is minimal and they create not a single spark of chemistry. Even their big kiss is tepid at best. Just why this amazingly powerful (not to mention hot as hell) personage would pine so longingly for an attractive but rather dull Earthly mortal is beyond me.

I agree with Eric about the visuals. Asgard looked awesome in 3D IMAX although it wasn’t worth the 18 bucks it cost. Kenneth Brannagh demonstrates a decent director’s eye with a script in need of more action.

I’ve never been a huge fan of the superhero genre. Thor does absolutely nothing to change my opinion. 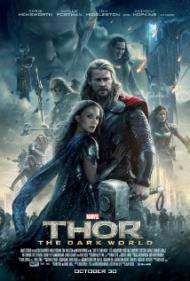