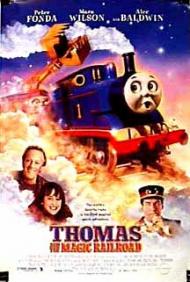 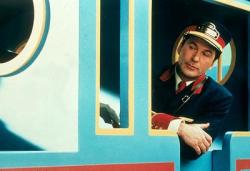 Alec Baldwin in Thomas and the Magic Railroad.

If ever there was a movie to sleep through, it is this one. This movie lives up to our motto of "We waste our money so you don't have to". If I haven't made it clear yet on how I feel about this movie then let me put it this way. IT SUCKS.

Ok, it is a kids movie. But that doesn't mean that quality need be thrown out the window. The plot about finding some gold dust and a magic engine named Lady is both simple and complicated. Simple that Peter Fonda has the magic engine and we know who the bad engine is from the start. Complicated in that the scenes switch from the fake looking model trains to the unexplained miniature Alec Baldwin to Peter Fonda looking sad or Mara Wilson doing pretty much nothing. In fact very little actually happens throughout the movie. The model trains follow the tracks, Alec Baldwin wonders where he will find gold dust and Peter Fonda looks sad.

Other than some coal falling on one of the engines there really is little humor. The special effects are pathetic. The engines all have mouths but they do not move. We just hear their conversations.

My sons seemed to enjoy it, but I was asked so many questions after the movie ended that it was apparent that they were as lost as I was. They also showed no interest in getting any of the toys based on the movie and TV series. A definite sign that the movie failed to spark their interest. So take your kids if you are desperate for a G rated movie, but remember, I warned you. 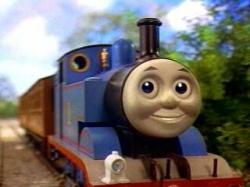 Thomas and the Magic Railroad

Eric, you mentioned the classic physical humor, but you failed to mention the scintillating verbal repartee such as when one of the trains says, “I'm feeling kind of blue, which isn't so hot when you're red.” I mean, c'mon, sharp dialogue like that must have taken seconds to come up with!

But seriously, I have just one question for the makers of this movie. WHAT THE FUCK? Were they high when they put this together? Were they expecting their audience to be high when they watched it? Its mishmash of live action and cheap looking model trains is just bizarre and not in any kind of a good way.

I was so confused by the oddness of it all that I had to look it up online to see if there was some sort of explanation. Turns out that the makers of the film took two different shows and combined them together. The original show was the British Thomas the Tank Engine and consisted of the model trains. When the show was brought to America and aired on PBS, they framed it with live actors and called the show Shining Time Station. On Shining Time Station, the character of Mr. Conductor would tell a group of children stories about Thomas the Tank Engine and then episodes of Thomas the Tank Engine would be shown. This movie though, tries to combine both stories and it just doesn't make sense.

As Eric pointed out, the special effects are pathetic. The transitions between live action and the models are jarring. They should either have stuck with the trains or spent more on the effects.

The plot, what there is of one, is dull. Peter Fonda looks embarrassed in all of his scenes and his acting is flat as hell. His relationship with Lady the train is frankly, a little creepy. I give Alec Baldwin credit for throwing himself into the spirit of the thing. He doesn't hold back and somehow keeps a straight face through it all. Maybe he was high when he acted in it.

Obviously I wasn't the intended audience for this movie, but I wouldn't inflict this thing on a 2 year old. I would put it in the running as one of the worst movies ever made. 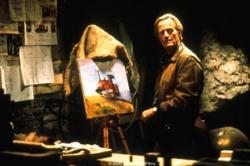 Peter Fonda in Thomas and the Magic Railroad.

Since the world didn't end yesterday as predicted I had no choice but to review Thomas and the Magic Railroad. I have to say that I agree with every single word both my brothers wrote about it. It's pretty dismal.

A tiny part of me was able to tap into that very young child's imagination that the movie is targeted for. This is the type of movie you might love at three but by five you will have realized just what a bunch of garbage it all is. The storyline, special effects and even the songs all pretty much suck.

The only way I was able to get through it was to imagine it as Peter Fonda having an acid flashback gone horribly awry. This helped considerably. I cracked up every time someone mentioned “Shining Time”. Nudge-nudge. (I know what that means.) In fact the script is filled with lines that can be taken as vague drug references. Check these out...

Mr. Conductor: “Stoke up the magic in the mountain, and the lady will smile... then watch the swirls that spin so well.” (That seems pretty self explanatory.)

Thomas: “I think his sparkle's all gone.”
Henry: “My smokebox doesn't feel sunny. It feels stuffed up.” (That's what happens when you visit "Shining Time" too often boys and girls.)

Thomas: “Lady, you're a really helpful engine.”
Lady: “And helping each other, brings to life the magic in all of us.” (of course a little magic gold dust helps.)

Thomas and the Magic Railroad is easily one of the worst, and most bizarre, movies I've ever had the misfortune to sit through.