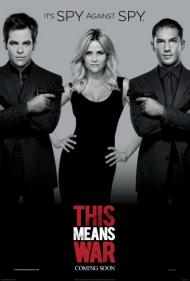 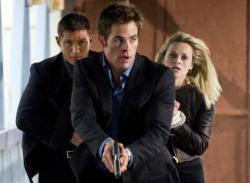 James Franco, Bradley Cooper, Sam Worthington, Colin Farrell, Justin Timberlake, Seth Rogen, Martin Lawrence and Chris Rock were all smart enough to turn down a lead role in this film. Tom Hardy, Chris Pine and Reese Witherspoon, who did end up starring in it, were the unlucky ones. All three of the actors are superior to this dumb attempt at romantic comedy.

Lauren, played by Witherspoon, is a consumer products tester who is unlucky in love, despite having the face and body of a movie star. Her best friend, Trish (played by foul mouthed, but quite funny Chelsea Handler) signs her up for a dating agency where she meets Tuck (Tom Hardy), because you know, internet dating sites are filled with good looking, buff English guys. Following her first date with him she runs into FDR (Pine) and ends up going on a date with him as well. What she doesn't know is that Tuck and FDR are best friends who are also CIA agents. When they both find out that they're dating the same girl they start competing to see who can win her hand, using all the resources of the CIA to their advantage.

Here's the problem with the plot. Lauren spends the whole movie dating two men without ever telling either of them that she's dating someone else at the same time. She's lying to them both even if it's only by omission. Tuck and FDR spend the whole movie not only lying to Lauren that they know she's dating someone else, they also stalk her, spy on her, have her followed and eavesdrop on her private conversations via wiretaps and video cameras. I didn't like any of them all that much and I didn't care which guy, if either, she ended up with.

There's some action scenes thrown in to try and liven things up but it's so generic and cartoony that it fails to add any tension. When the movie starts, Tuck and FDR kill a target and later his brother comes looking for them leading to another action scene at the movie's end, by which time I was rooting for the brother to kill them both. And the less said about how the villain is able to track them both down by a scrap of cloth the better.

Witherspoon, who is normally so likable and charming in everything she does, fails to charm here. Her character is also made to be quite stupid at times. In one scene Tuck shoots FDR with a tranquilizer dart. Lauren finds him sleeping, but apparently doesn't wonder why she can't wake him up or why a dart is visible on the couch next to him.

I'm not normally a fan of Chelsea Handler, but she's the only funny thing in the entire movie. She's married and a mother and so lives vicariously through Lauren's love life. The two women have more chemistry together than Lauren has with either of the men. Ironically, Tuck and FDR likewise have better chemistry together than they do with Lauren. That has to tell you something.

I've enjoyed many a romantic comedy and I'll confess to enjoying some chick flicks, but this is pure female fantasy drivel. I doubt very highly you're going to find many men enjoying this one. It's all about the idea of one woman having two hot guys competing for her attention. The cast deserves better and certainly audiences do as well. 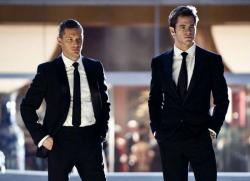 How can these civil servants afford such expensive suits? Tom Hardy and Chris Pine in This Means War

This Means War has a seed of a decent story.  An unlucky in love consumer products tester dates two men to test each one out to see who is the better match for her.   Minus the opening scene, the entire film takes place in just over one weeks time.  She does omit telling each man that she has other dates, but she never makes any commitment to either as well.  The two guys do not complain of her not telling them that she is dating someone else as they are even less honest to her.   The entire set up is perfect for all kinds of silly romantic encounters and situations.  If only there were some.

One problem is in the direction.  McG has no clue how to pull this off.  As was his problem with the Charlie's Angels films, he is never able to balance the action and the humor, let alone any romantic emotional attachments.  The action is never exciting or tense, and the jokes, except for Handlers, are never funny enough.  As far as romance goes, we never get to know these three well enough to care.

Scott mentioned the scene where Pine gets the dart in his neck.  Instead of shooting Pine with a dart through a window from the roof of a neighboring building, Hardy should have just put a sleep drug in Pine's drink?  They are shown sneaking into any building they want, and how did he know Pine would be in that room with the curtains opened any way?  Would it not have been simpler and funnier to have Pine and Witherspoon drink the wine, start to make out, only to have Pine drift off to sleep as a hot and bothered Witherspoon looks on disappointed, thinking Pine is uninterested?

There is a grain of a promising story here, but the execution is horrible and the characters completely unbelievable.  Tuck is supposedly a sentimental romantic, who privately still pines for his ex-wife, but I never bought that he was much of a father.  He puts all kinds of effort into dating Lauren, but puts in the minimal amount of time in with his son.  When his ex says she has a date, should he have not then offered to take his son for the evening?

FDR prides himself a stud, but has insecurities.  The reference to the size of his hands reveals that in what is supposed to create a big laugh.  "That means he's got a mike and ike for a penis."  This James Bond wannabe's big move is to pretend to want to rent the same DVD as a hot girl.  For some reason, he has a pool on his roof with a glass ceiling, that at one point we see a bikini glad hottie swim in above him.   The pool never again comes into play.

Lauren is your typical romantic comedy chick, beautiful yet bland.  The guys each investigate her past and hobbies, but I never felt she became any type of real person.  She is just there to look cute and act slightly confused.  Her best moment is when she tells the guys how to stop the speeding vehicle careening towards them.

Til Schweiger, one of my favorite German actors, has little to do, but he has a scene that stuck with me.  He uses a cloth, that Scott mentioned, to find Tuck and FDR.  The cloth is vicuna.  It is one of the worlds most expensive fabrics.  The last time I heard it being mentioned in a film was when the snarky salesman in Sunset Blvd (1950) tells William Holden to let Gloria Swanson buy the suit made from vicuna for him.

This Means War could have used a better rewrite.  It has three credited writers, including Simon Kinberg who worked on such scripts as Mr and Mrs Smith (2005)  and Jumper (2008).    This Means War aspired to be another Mr and Mrs Smith but never found the right tone.  Like Jumper, its plot holes are too numerous to mention.   With this kind of sloppy writing and McG's inability to create an emotional connection to the audience, this film is best categorized as a missed opportunity.