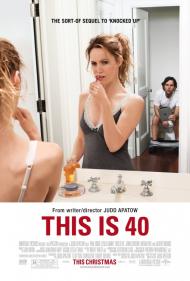 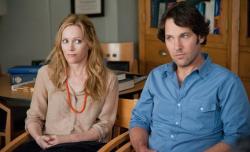 Leslie Mann and Paul Rudd in This is 40.

From the overly prolific Judd Apatow comes This is 40, the sort-of sequel to 2007's Knocked Up. Paul Rudd and Leslie Mann, supporting players and the best part of that earlier film, take center stage this time. It's an improvement over Knocked Up, but still suffers from Apatow's usual indulgences and runs about 45 minutes too long.

The term "sort-of sequel" is used to describe this movie because while Rudd and Mann are playing the same characters, no mention is made of the events from Knocked Up nor are Seth Rogen or Katherine Heigl's characters referred to, even though Heigl played Mann's sister and family plays a very big part of this story.

There's not much plot to this film, even though quite a bit happens. It simply takes place over one week in the life of a family, centering around the 40th birthdays of the parents, both of which take place during that week. Mom, Debbie (played by Apatow's real life wife, Leslie Mann), is having trouble accepting that she's 40 and insists on calling it her 38th. Pete, (Rudd) owns a retro record label that's going through financial difficulties. He's trying to launch a new record for an aging rock star that no one wants to buy. Their daughters (played by Apatow and Mann's real daughters), Sadie and Charlotte, are constantly fighting, with Sadie, the older daughter, hitting puberty. Pete's father is a leech and Debbie's is distant. Someone's stealing from the store that Debbie owns. Some of these events and subplots provide laughs, but they definitely add to the overly long running time.

Apatow is known for letting his actors improvise and you can see that happening here. What he's not known for is his editing. There are far too many supporting characters in this film, all of them striving to get a laugh and Apatow doesn't seem to have the will to trim any of them. Megan Fox looks good in a bikini, but she's not needed. Jason Segal brings nothing as Debbie's personal trainer. Likewise scenes with Robert Smigel, Chris O'Dowd, Annie Mumolo and Melissa McCarthy should all have been left on the cutting room floor. Yes, they provide some laughs, but their scenes are too often self-indulgent and simply including more jokes does not make a movie better. Instead of being 2 and a quarter hours, this should have been closer to 90 minutes.

The heart of the story and where it should have stayed focused is the relationship between Pete and Debbie. Mann and Rudd have a great chemistry and very believably play a longtime married couple. Anyone who's ever been in a long term relationship will be able to relate to them. They argue and even fantasize about killing the other person, but they remain committed to each other. Their scenes together are not only funny, but also contain the most heart, without every being cloying or overly sentimental.

With a much tighter edit this movie could have been a classic. Instead, despite some laughs and nice central relationship, it feels flabby and self-indulgent, like Apatow is trying to provide work for all his friends in Hollywood and didn't want to insult any of them by cutting their parts. It's a step up from Knocked Up, but not as big a step as it could have been. 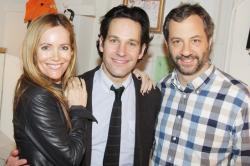 Yes, anyone who has ever been in a long term relationship will be able to relate to some of what this couple experiences. "Some" being the key word, as This is 40 is aimed directly at middle aged married couples with children. Until you have been burdened by marriage, bills and most importantly children, you will not be able to fully appreciate the struggles Pete and Debbie go through in a single week.

Scott's description that there is not much plot, yet quite a bit happens is accurate as that was the intention of the director. As a married father, Apatow put on film a condensed look at the struggles and trials most married with children couples go through. From finances to sex, Pete and Debbie argue about everything. Each of their parents add tension, as do their foul mouthed daughters.

Scott wrote that many supporting characters should have been trimmed or cut. I agree that O'Dowd, Segel and Fox should have had less screen time. One scene in particular should have been removed altogether. It is when these three meet in the pool. It has nothing to do with Pete or Debbie, so all it does is add screen time. Okay, we get to see Megan Fox swim under water in a bikini, but it still was not needed.

I disagree with Scott that Melissa McCarthy's role was unnecessary. Sending your children to school is not as simple as dropping them off at the school and reminding them to do their homework. As parents we have to deal with teachers and other parents of students. This was Apatow showing yet another way a married couple with children have stress delivered to them. The scene where they meet in the Principal's office also shows that when it comes to an outside source attacking their children, Pete and Debbie, like most parents, are a united front.

Rudd and Mann make a very good onscreen depiction of a realistic couple. Neither is perfect. Debbie is vain, spending money on a personal trainer and not wanting to admit her age. Pete whines far too often and is some what of a push over, especially when it comes to his father. One of their worst offenses in my wife's eyes, was that they both allow their children to talk to them in horribly disrespectful ways, throwing four letter words around like a bunch of sailors in a bar.

Being imperfect people make them all the more real and relatable. This is 40 does not have a great story or much of a story arc. By the end of the film, Pete and Debbie supposedly have a better understanding of their situation. We definitely like this couple very much, but with such a simple plot, it definitely needed to be trimmed. 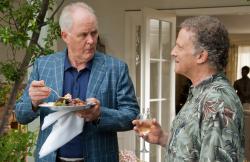 John Lithgow and Albert Brooks in This is 40.

I'm on the same page as my brothers on this one. The cast is good and there are moments of hilarity. Apatow writes inspired scenes that really hit the bull's eye of realism. The problems faced by Pete and Debbie as they turn 40 are things that nearly everyone can relate to. The bickering of a long time couple and the squabbles that arise between family members are all portrayed with a wicked truthfulness. Leslie Mann and Paul Rudd are two very talented actors. They bring a real veracity to their roles as a married couple and the parents of two young daughters.

The movie's problems, however, are obvious. Apatow's penchant for self-indulgence is everywhere you look. He pads the story in order to include scenes for his friends. I agree that many of the supporting characters should have been trimmed or eliminated completely. I'm on Scott's side about Melissa McCarthy's scene in the principal's office. Yes parents have to deal with problems that arise at school, but the only reason Pete and Debbie are there is because Debbie went ballistic on a 13 year old kid. Although it is really just an excuse to let McCarthy riff for a few minutes. Apatow apparently thought it was so hilarious that he included an extended version of this scene during the end credits.

Neither of my brothers mentioned Albert Brooks or John Lithgow but they both bring a certain gravitas to their roles of Pete's father and Debbie's father, respectively. Brooks may be a mooch but he at least spends time with his son and grandkids whereas Lithgow is nearly a complete stranger to his eldest daughter and her family. The scene where they meet is funny (see photo). Brooks starts quoting the musical Oliver as that is Lithgow's character's name while Lithgow just stands there looking bemused.

Scott called this movie a "sort-of sequel" to Knocked Up and I see what he means. But I think a more accurate description is to call it a “spin-off”. Television shows often take supporting characters and build separate shows around them and that's just what Apatow did here. Although Seth Rogen's and Katherine Heigl's characters are never shown, there is a photograph of Alison on a wall and Pete mentions getting the marijuana brownies from Ben. Also their two daughters were in both movies as were three other supporting characters. Charlyne Yi's character Jodi was just a stoner in the first movie but here she works for Debbie. Jason Segal's character returns, now he's Debbie's personal trainer, and Tim Bagley is back in his small role as Debbie's OB/GYN.

This is 40, despite moments of comic brilliance, is just too damn long and cluttered. 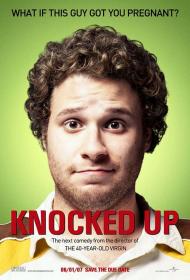