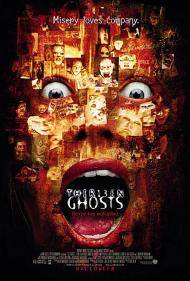 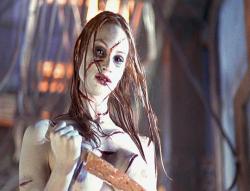 Thirteen Ghosts is the worst kind of horror movie. It doesn't scare. Director Richard Beck, who also directed the equally unscarey Ghost Ship, likes a good set up. Unfortunately, he does not have the panache to execute the follow through.

Like Ghost Ship, Thirteen Ghosts puts a group of people in a secluded locale full of evil spirits. This time it is a widowed father, his two children, their nanny, and a psychic played by Matthew Lillard. Every time a ghost showed up around Lillard, I expect him to do a Shaggy impersonation and run away.

The always-good Shalhoub plays a distressed father. His wife recently died in a fire. He is currently living in a small apartment with his teenage daughter and young son. Money is tight and they are thrilled to learn that a long lost uncle has left them a huge house. The family goes to the new house along with their nanny, who might as well be a direct descendent to Gone With the Wind's Mammy. Her only purpose, besides being far to loyal, is to stand in the background and make snide remarks.

The slimy lawyer, who broke the news to the family, accidentally releases a trapped ghost and sets the action into motion. The lawyer's demise is along the same gruesome line as the early gross shot in Ghost Ship. Beck likes gore, but gore has minimal film value. It doesn't say much for a film when the one and only thing remembered about it is the gore scene.

Beck was a visual effects art director on such films as The Hunt for Red October and The Abyss. Both films are about characters trapped in limited spaces. The limited space is what Beck does best. Like Ghost Ship, Beck creates a great setting. Thirteen Ghosts features an elaborate set. The house is almost entirely made of glass and steel. The characterless characters get chased through this elaborate maze most of the movie.

Beck is a great visual arts director. He is by no means an even decent film director. He should get his old job back, and Shalhoub should find a movie worth his talent.