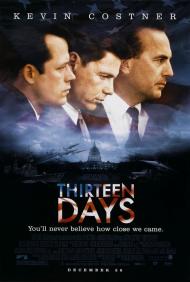 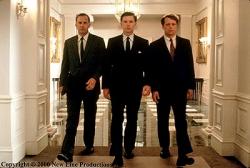 Most movies are predictable. You know how they are going to end. The good guys will win. The bad guys will lose. Occasionally, Hollywood will slip one through that doesn't turn out exactly like you'd expect, but those are rare and far between. Therefore it is not the outcome that makes a movie good, but rather how the movie reaches that outcome. As someone said, 'The journey is its own reward.' Which is why a movie like Thirteen Days, where the outcome is a matter of historical record, can still be tense and entertaining.

Before this movie started, I knew that the Russians pulled their missiles from Cuba, I knew that President Kennedy was known as a hero because of his command of the situation, and I knew that the general public was in a state of panic, convinced that those 'dirty reds' were going to bomb us. The pleasure in this movie is watching the characters come to terms with the situation and attempt to come up with a solution that won't end in the world going to war.

Kevin Costner stars in the film as JFK's personal aide. Unlike a great many people, I actually enjoy Kevin Costner. Although he doesn't always pick the best movies, I think he is an under rated actor. I particularly enjoyed him in the Clint Eastwood directed A Perfect World. Just keep him away from movies about the post apocalyptic future. And he does a decent job in this movie except for a few scenes of melodramatic dialogue which I blame on the writer and director rather than him.

Which brings me to what I didn't like about this movie. I didn't like, as I mentioned, some of the dialogue. During the tenser moments, it is fine, however, when Costner's character is at home with his wife and kids, it tends to go a little over the top. Specifically, I am referring to Costner's comments about the sun coming up, when he is sitting at the breakfast table. This is in reference to an earlier conversation between him and his wife about how they wonder if they will ever see the sun come up again. A simple moment of him looking out the window at the sunrise would have sufficed to get the message across, but instead we must have the theme beaten into us by an inane piece of dialogue.

This movie is also presented in a very one sided way. The Russian side of the story is left untold. Now that the cold war is over and the Russians are no longer cast as black hearted villains, it would seem more appropriate to allow at least part of their story to come out. We are presented with Kennedy's battle to decide his course of action, and it would have added to the movie, I feel, if we could also have seen Kruschev making some of the same decisions.

So while this is a good movie, it is just those little nagging items that keep it from crossing the line into greatness. 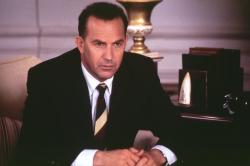 I was not alive during the Cuban missile crisis and actually knew very little about it. I knew only that there were these missiles in Cuba and Kennedy ordered a blockade. Oh I'm sorry, I mean he ordered a quarantine, and eventually the Russians sent the missiles back.

This movie is based on actual events. Real life people are portrayed and dates are noted. The outcome is also known to anyone who passed high school. I found it amazing that the film still held my attention and I was moved by the film's tension. Much like Apollo 13, Thirteen Days proves that a good film does not necessarily need a surprise ending.

The acting here is very well done. The John and Robert Kennedy imitations are great. Kevin Costner does a decent job. He is best when doing a subtle little scene like talking to his wife or a pilot about not getting shot down. However, I would like to know what was he thinking with that exaggerated accent?

I viewed this movie as a history lesson. Witnessing private presidential conversations, watching politics in action. Harrison Ford's President had it tough in Air Force One defending his family, but Kennedy here is defending a nation. This movie practically falls over itself patting Robert and John Kennedy on the back. Sure they made some big decisions and I don't want to take anything away from them, but this movie could have done without scenes where characters tell each other just how smart they are. Can't the audience judge that for themselves? 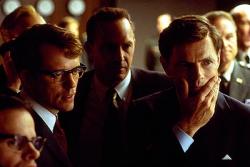 As both my brothers already wrote, Thirteen Days takes a chapter from a history textbook and turns it into riveting drama. It's a story where knowing the outcome doesn't diminish its power to engage the audience. Especially since we are given a peak inside the Kennedy White House, where all the decisions were made during that fateful month and year.

Bobby Kennedy's book about the Cuban Missile Crisis was called Thirteen Days. Despite borrowing the title, this movie was actually based on a different book called The Kennedy Tapes: Inside the White House During the Cuban Missile Crisis by Ernest May and Philip Zelikow. A 1974 television movie called The Missiles of October had already dealt with the subject and had been based on the Kennedy book. Thirteen Days had access to some newly declassified information but it also took greater dramatic license.

According to former Secretary of Defense Robert McNamara, the role Kenny O'Donnell (Costner) played in the decision making process was greatly exaggerated. Here's what he said. “For God's sakes, Kenny O'Donnell didn't have any role whatsoever in the missile crisis; he was a political appointment secretary to the President; that's absurd.” He further elaborated, “It was not Kenny O'Donnell who pulled us all together—it was Ted Sorensen.”

Be that as it may, this movie is still well-crafted with a good cast. I agree with Scott about the dialogue Costner recites at the kitchen table. It's needlessly melodramatic. Other lines work quite nicely however, like when the Soviet ships turn back and Secretary of State Dean Rusk says. “We were eyeball to eyeball and I think the other fella just blinked.”

Eric, I agree wholeheartedly that Costner's accent is horrible. It's so bad in fact that in Boston “A Kevin Costner Accent” has become slang for anyone doing a bad Bean Town accent. Otherwise his performance is quite good. He is a competent actor with an extremely likable persona. He must be fascinated with President Kennedy in real life as this is the second time he has appeared in a movie about him. He was in Oliver Stone's JFK back in 1991.

Thirteen Days is informative and entertaining. It may have changed the players around a bit but the basic facts of those perilous two weeks in world history are accurately and excitingly brought to life.