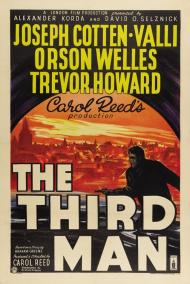 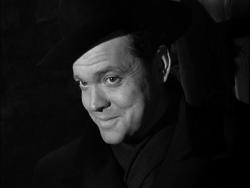 Orson Welles in The Third Man.

The Third Man is one of the most celebrated examples of film noir in cinema history. It was directed by Carol Reed from a story by Graham Greene. It is truly one of the most atmospheric mysteries ever filmed. All you need know about the plot is that an American writer of pulp Westerns arrives in postwar Vienna and investigates the murder of an old childhood friend. Trust me, you'll enjoy this movie much more if you discover the story as it plays out.

This movie is famous for its Oscar winning black & white cinematography. Sharply tilted camera angles and looming shadows are used to brilliant effect throughout the movie. The climax in the sewers of Vienna, nearly every shot of which is now considered classic, is not only masterfully suspenseful but it has also influenced many other films.

The Third Man is also famous for its score by Anton Karas, which was played entirely on a zither. From the opening credits, right up to that famous final long shot, the music enhances the story and adds to the sense of atmosphere that the film absolutely drips with. The music is neither happy nor sad but is very unique and somehow seems to suit the movie perfectly.

As an historical record of the destruction caused by the second world war, The Third Man is priceless. The streets of Vienna, shot mostly at night, are filled with rubble. Bombed-out crumbling buildings stand in sharp contrast to some of the most beautiful architecture imaginable. Reed had the cobblestone streets watered to make them dramatically reflect light during the night shoots.

Joseph Cotten stars as Holly Martins but he is upstaged by Orson Welles in his limited screen time as one of cinema's great villains, Harry Lime. His entrance (more than an hour into the picture) is one of the most memorable of all time. And the scene at the famous Viennese Ferris wheel features one of the best bits of dialogue you are ever likely to hear. According to legend it was added to the script by Orson Welles.

He tells Holly, “Like the fella says, in Italy, for thirty years under the Borgias, they had warfare, terror, murder and bloodshed, but they produced Michelangelo, Leonardo da Vinci and the Renaissance. In Switzerland, they had brotherly love. They had five hundred years of democracy and peace, and what did that produce? The cuckoo clock.”

My brothers have often accused me of gushing over classic films and placing them on a pedestal. The Third Man is one film that deserves all the praise heaped upon it. It truly belongs in the pantheon of cinematic masterpieces. If you have never seen The Third Man, what are you waiting for? 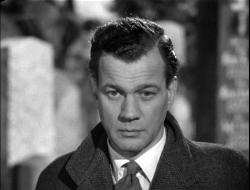 Joseph Cotten in The Third Man

The Third Man reunited Orson Welles and Joseph Cotten. They had previously worked together on several films including Cotten's feature film debut in Orson Well's classic Citizen Kane (1941). They make a great on-screen team. One of my favorite scenes is when they talk on the Ferris wheel. It contains a not so subtle threat and demonstrates what each actor brought to the screen.

Welles carried an air of arrogance with him that bordered on the obnoxious. His smirk is one of someone filled with far too much self importance. In real life, Welles was late reporting to the set as he was touring around Europe instead. He caused the film further delay when he refused to film his sewer scenes in the actual sewers. His sewer scenes were filmed in London. Notice how in most of the sewer scenes you cannot even see Harry's face as it was often a stand in and not Welles.

Cotten made his name in film noir as well as Welles but his screen presence was the exact opposite. What he brought to his roles was a sense of pity. His droopy eyes made him the perfect looking sad sack. You felt sorry for him almost on sight, without him ever speaking a single word. I always think of him as Marilyn Monroe's sexually frustrated husband in Niagara (1953).

The Ferris wheel featured here is quite a famous Vienna landmark. It was built in 1897 and survived the bombings of Word War II. It has been featured in several famous films including The Living Daylights (1987). It can be seen behind Maryam d'Abo and Timothy Dalton just after arriving in Vienna.

Patrick mentioned the atmosphere, and it truly is thick with tense possibilities. Reed took full use of night scenes and the wreckage left from the war, but the most striking scene for me features a deserted street during the day. As Cotten looks on and a few leaves fall, Valli walks down the center of a tree lined street that seemingly goes on forever. We are not sure where she is going. She then turns and walks back but does not go to Cotten as we expect. It is a simple little scene but the image, much as the rest of the film, makes quite an impact. 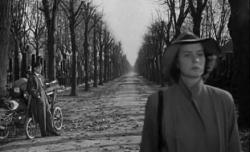 Joseph Cotten and Alida Valli in The Third Man.

Prolific author Graham Greene, who wrote the screenplay for this film, reportedly developed the story from a single sentence when he wrote, "I had paid my last farewell to Harry a week ago, when his coffin was lowered into the frozen February ground, so that it was with incredulity that I saw him pass by, without a sign of recognition, amongst a host of strangers in the Strand". It's as intriguing an opening line as you are ever likely to read and he developed that single idea into an intriguing and entertaining script. Greene was one of the fathers of the modern espionage novel and you can still see his influence in books and films today. The shades of grey shown on the film are mirrored in the characters in the film.

Director Carol Reed proves himself Greene's equal, bringing a distinctive visual style that matches Greene's script. Apparently the two worked well together, this being the second of three films the famous novelist would write for Reed to direct. As my brothers noted, Reed makes good use of Vienna's post war state, often filming at night in rubble and bombed out buildings. The film is rich in atmosphere as the director makes terrific use of light, shadow and distances. He also frequently employs unusual camera angles, tilting the scene for dramatic effect. Reportedly, Reed's close friend, American film director William Wyler, teased him about these shots by sending him a level with a note saying, "Carol, next time you make a picture, just put it on top of the camera, will you?"

Completing the perfect trifecta is the terrific cast. Cotten does sterling work as the seemingly world weary, expatriate author who is torn between doing the right thing and standing by his friend. I agree with Eric that Welles comes across as arrogant and smirkful, but that works perfectly for this character and like Patrick, I felt that he steals his few brief scenes from Cotten. The setting and the cinematography give the film a dark, almost depressing feel and Welles bring a dash of life and color to the story. It makes his character one of the most intriguing in the film and Welles would reprise Harry in a series of radio shows.

Greene certainly knew how to write stories that were suited for the screen. Nearly all of his 25 novels and many of his short stories were adapted for the cinema or television. One of his novels was adapted for the screen as recently as 2010 and in 2002 an adaptation of his The Quiet American garnered an Oscar nomination for Michael Caine. The Third Man though, is probably his most celebrated big screen work. It's the perfect marriage of script and cinematography. It's high entertainment with artful flourishes that enhance the story without ever getting in its way.