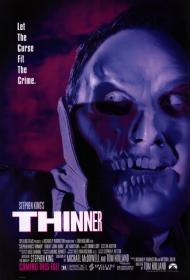 Prolific horror maestro Stephen King has had dozens of his short stories and novels adapted into motion pictures. Some of them are classics like Carrie (the original version), The Shining, Stand by Me, and The Shawshank Redemption. Others are pure trash like Graveyard Shift, Children of the Corn, and Maximum Overdrive. Thinner, based on King's 1984 novel which he published under the pseudonym Richard Bachman, falls somewhere smack in the middle.

An arrogant and morbidly obese lawyer (Robert John Burke) living in a small town in Connecticut accidentally hits and kills an old gypsy woman while out driving one night. He was distracted by the fact that his wife was orally pleasuring him while he drove. After he gets off (pun intended) Scott-free due to his friendship with the judge and the police chief, he is confronted by the old woman's even older father on the courthouse steps. The old man touches the lawyer on the face and whispers the single word, “Thinner” (see photo).

Thus begins this man's personal nightmare. He begins losing weight at an alarming rate no matter how much he eats. He goes to a clinic where he is tested but there is nothing medically wrong with him. Even consuming 12,000 calories a day does nothing to stem the weight loss. He finally comes to believe it is a result of the gypsy curse placed on him by the old man. The judge and the police chief are both likewise stricken with curses of their own.

The first half of the movie is intriguing as we see this man's dilemma grow worse and worse. But then it goes in a different direction as the lawyer hires a psychotic mob boss that he once represented in court. Soon a full scale war is being waged between the Italian mobster and the gypsies, all of which leads to the semi-satisfying conclusion. What could have been a commentary on class warfare instead morphs into a run-of-the-mill revenge movie.

The special effects are decent and there are a few shocks and scares along the way. But there really isn't anyone to root for and in a horror movie that's a big mistake. You can't really feel sorry for this guy since he was such a selfish jerk to begin with but at the same time the gypsies aren't exactly portrayed as innocent victims either. They exact an evil vengeance, and the mobster is a sadistic killer. All of the characters, in fact, are pretty much stereotypes. The lawyer's daughter, in a fairly small role, being the only truly innocent person in the story.

Thinner does provide some decent entertainment of the grotesque variety, but in the category of movies adapted from the works of Stephen King, it's solidly mediocre.