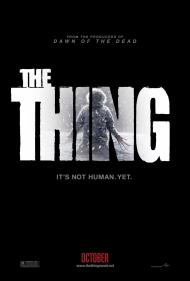 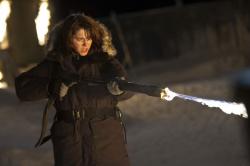 Mary Elizabeth Winstead in The Thing.

The Thing, which is a prequel and not a sequel to the 1982 John Carpenter film, has a fairly strong been-there, done-that feel to it. How many times have we seen a movie or television series episode where a group of people are trapped in a confined space where one of the people aren't who they appear to be, but nobody knows who until the body count starts rising? There have been mysteries, haunted house stories and plenty of science fiction with such plots and The Thing (2011) fits right into the genre. There are not only plenty of connections to John Carpenter's version, but it also owes a big debt to Ridley Scott's Alien.

The story opens with the discovery of an alien spaceship buried in the ice, deep in Antarctica. Nearby an alien body is also discovered, frozen in the ice. The body is brought to a nearby Norwegian science station by a group of scientists, including American Paleontologist Kate (Winstead). Later that first night the alien turns out not to be dead however and bursts out of its ice block. After they kill it, Kate is studying some of its dead tissue, only to discover that the creature's cells have the ability to assimilate and mimic other creature's cells, which means the alien could still be alive and impersonating one of the team.

Although there's plenty of action and several rather gross moments of alien assimilation, the movie's best moments aren't the action ones, but the suspenseful moments when you aren't sure who is who. There's a great moment when the group of scientists are gathered in one room and they need to know who, if anyone of them is really the alien. They've determined that the alien can't impersonate inorganic material and therefore the alien won't impersonate fillings, as an example. Kate therefore has to peer into each person's mouth looking for fillings, knowing that any of the mouths she looks into could be her last.

Perhaps the biggest problem with the movie is that there's very little characterization. We learn nothing about anyone's history. We only know what we are shown over the course of the movie. Winstead does a fairly good job in the lead. She's believable and gets to kick a little ass without ever going over the top. She's no Ripley, but she's at least a distant cousin. Joel Edgerton and Adewale Akinnuoye-Agbaje are both okay as the chopper pilots, but their parts are rather small. The Norwegian scientists are all interchangeable and are clearly all wearing red on this landing party.

For fans of John Carpenter's The Thing, there are several Easter Eggs. The story here segues right into his film. If you're familiar with his version than you know that it opens with a dog running into an American Antarctic station with a helicopter following it. This movie ends with the helicopter in hot pursuit of the dog. Later in the 1982 version, men from the American station go back to the Norwegian station and explore its remains. Great care was taken in this prequel to explain everything they found in the original.

There are things to enjoy in this movie, not least of which is watching Winstead as Kate. It's just that while some of the action is good, there's nothing overwhelmingly exciting about it. It's decent enough, just nothing to get overly excited about. We've simply seen it all too many times before.

Joel Edgerton in The Thing

Although The Thing is technically a prequel, it also works as a remake as the story is very similar.  The big plot difference being that they go on to the spaceship in this version.  One scene it recreates is also one of the best.  It is the one Scott mentioned, when they look for fillings in each other's mouths.  In the original they do a blood test.

The special effects are better and the inclusion of the spaceship as a setting elevates the atmosphere above the 1982 film.  What this film does not do better is keep things at all cohesive.  In the first film it makes sense who is and who is not contaminated by the alien parasite.  Here it can be anyone who wanders off for any amount of time.  It wants to keep you guessing but it gets ridiculous after awhile.  Any time a character is off screen for any amount of time they may have become infected, even if while they were away another character is shown fighting the alien.  I tried to keep track of who was and who was not infected but gave up when the film makers clearly were not trying to make the mystery at all solvable.  Okay, the movie throws a clue at you for the last person infected, but it is too obvious to even note.

Scott and I pointed out the lack of characterization in the 1982 version and this one surprisingly has even less.  The first one gave miniscule personality traits to the men stationed together.  Here they are all utterly interchangeable.  The only difference at first is who has a beard and who does not.  Later it becomes who has fillings and who does not.  I had no clue who was being killed at any given time and hoped the killings would come quickly so I had fewer victims to keep track of.

At its best, The Thing is a suspenseful, gory episode of The X-Files.  At its worst it is a schlock fest of blood and grotesque aberrations.   It is entertaining enough to watch but not unique enough to warrant a second viewing, outside of a double feature with the original to see how well they match up. 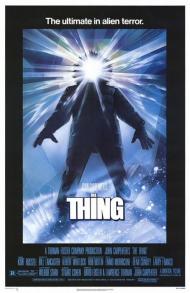