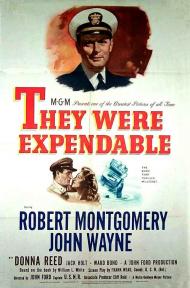 At one time, Hollywood actually supported the government and the military.

With Hollywood bashing our government and our military these days, a movie like They Were Expendable would never get made again. If it did get made now, Hollywood would turn the message of duty and sacrifice into one of shame and conspiracy.

Montgomery (who had just been released from actual active military duty) and Wayne (in one of his last films where he was not top billed) play real life PT boat officers stationed in the Philippines in World War II. They battle the Japanese and the military brass that wants them to relocate after the Japanese overrun Bataan, leaving their men stranded. Anyone who knows military history knows what happened. After the attack on Pearl Harbor The United States did not have the means to get all of the men out and thus many United States military personnel were left behind. Most were eventually captured by the Japanese and many died. One sad moment is when the cook keeps assuming that the mighty battleship, The U.S.S. Arizona will come steamy in, with guns blazing, and save them. He had no idea that it was currently sitting on the ocean floor.

A film like this is ripe for some Liberal like Robert Redford, Steven Spielberg or Hanoi Jane Fonda to make and show the evils of our Government and country. But this movie was made in 1945 and directed by John Ford and Robert Montgomery. They actually loved their country and did not aid and comfort the enemy by bashing it.

They Were Expendable takes on the daunting task of showing honor in lions for lambs. To all of you Michael Moores, it takes absolutely zero talent to bitch and complain. Anyone can do it. To see something deeper and more poignant is the real challenge. One interesting scene had Wayne announce to the men that they only had so many helmets to go around so only the gunners would wear them. I kept waiting for one of the men to stand up and say he was going to write his Congressman and tell Katie Curic on him for not providing the correct equipment. But it never came. These were real men who understood that shit happens and you make the best with what you have.

Were they the greatest film making generation, or are modern filmakers just a bunch a pansy ass whiny little bitchs too scared to call out the enemy. They are so in fear of offending a Muslim, they race to find flaws in our own country. What is so damn wrong with making a rally around the flag movie? 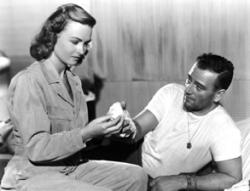 Wow, I’m not sure what set you off the day you reviewed this movie Eric, but you were clearly in a pissed off mood. I find some of your political rants to be amusing (the line about Katie Couric, for example, is funny) but you often lose focus on the movie you are writing about, as you did here. And no offense but just who the hell are you to question the patriotism of liberal filmmakers? You write “It takes zero talent to bitch and complain” well isn’t that exactly what you do throughout your review?

Now on to the movie at hand… Director John Ford was at first reluctant to make this movie as the war was still going on when they began filming. Like Robert Montgomery (and several other big name stars of the day such as James Stewart and Clark Gable) Ford had enlisted after Pearl Harbor. John Wayne, ironically the movie star most closely associated with war movies, did not.

They Were Expendable was filmed in the Florida Keys and around Miami. It features several well staged action sequences and maintains a very serious tone throughout. Ford clearly wanted it to be as authentic as he could get it. In trying to make an epic though the narrative loses focus near the end and the storyline begins to meander a bit. There are at least two false endings before the final scene of the last American plane flying over that famous beach on its way out of the Philippines, followed by a paraphrase of General MacArthur’s immortal words, “We Shall Return” on the screen.

The supporting cast is good. The always reliable and tough-as-nails Ward Bond is here and Donna Reed makes a believable Army nurse. John Wayne proves his leading man status as well as his inimitable (but highly imitated) way with a line. Watch the way he turns this simple phrase into something memorable… "Listen sister, I don't dance!"

They Were Expendable shows the heroic sacrifices made by our servicemen and women during wartime without glorifying battle. For that it should be commended, although a few scenes could have been trimmed for a tighter edit. 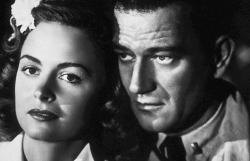 Donna Reed and John Wayne in They Were Expendable.

Eric, in your review for Back to Bataan, you mentioned that it plays out like a sequel to this movie and now having watched it, I have to agree with you. I kept thinking that Wayne's character must have a twin brother also stationed in the Philippines. Where Back to Bataan told the story of the army, this one tells the story from the point of view of the Navy.

Robert Montgomery had not only just been released from active military duty, he had actually served on a PT Boat. He put that experience to good use when John Ford was taken ill during filming and Montgomery took over director duties during several well filmed battle scenes aboard the boats. The climactic battle near the end, with Wayne commanding one boat and Montgomery commanding the other, is particularly well done as their boats are surrounded by flak and explosions.

It was odd seeing Wayne play the supporting part and have a love interest. In Back to Bataan, released just a few months before this one, he played the more familiar tough guy commander while Anthony Quinn would provide the support and take on the romantic duties. Montgomery had the actual military experience, but he didn't have Wayne's physical presence. They actually make a believable team, although Wayne had more star power.

Although there's not much humor, there are a few lighter moments. My favorite is when to get some much needed torpedoes they blackmail a sailor by telling him that they'll tell the rest of his crew that he played the leading lady in a play while at the Naval Academy.

I agree with you Patrick that the story does meander. I enjoyed the first half much more than the second when it starts to become more a series of events than a cohesive plot. It's still entertaining, but I agree it could have been tightened. Donna Reed's character also disappears and I wanted to know whether or not she survived.

Despite the excessive running time, this is still an action-packed war film with a top notch cast. 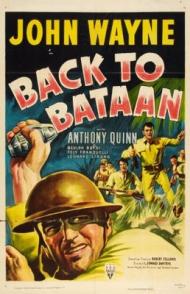