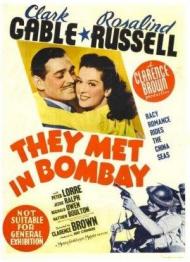 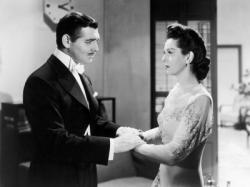 Clark Gable and Rosalind Russell in They Met in Bombay.

They Met in Bombay is good old fashioned matinee entertainment. The plot is all over the place. It plays like two different stories smashed together. Still, you have Gable's and Russell's charms to hold it all together.

The first half of the movie has Gable and Russell as unknowingly competing jewel thieves. They are each in Bombay to steal some royal jewels off a fat unsuspecting victim. Gable's plan is to steal the necklace and replace it with a copy. Russell's plan is to pretend to be a distant relative and get close enough to nab the goods. Of course they end up as a team as they drive away from the hotel, with the jewels in hand and the police in hot pursuit.

They get aboard a Chinese steamer with Peter Lorre as the Chinese captain. They end up in China living together. All of the jewels from the necklace have been spent except for the big diamond. While disguised as a British officer - in order to steal some money - Gable actually ends up in the British Army. He gives them a phoney name and he finds himself stuck. He and Russell then find themselves in a battle. His division is trying to save some civilians by relocating them when the convoy is attacked on the road. Gable goes into action and ends up being the hero. Back at camp Gable is going to get a medal for his action. However fate catches up as the police arrive and spill the beans on this 'hero'.

Made in 1941, I suspect highly that this film has some political motives behind it. America was soon to be at war. This movie is about a criminal who turns army hero. The lesson of Gable morally saving himself is blatant but not too preachy.

Although They Met in Bombay is all over the place, it still is watchable. This is almost entirely due to the star charisma of Gable and Russell. Russell yelling at Gable, when he was driving the getaway car from the hotel, had me laughing. Gable charming and demanding the tailors make his phoney officers uniform is classic Gable. The man had the toothiest smile. He could do more with that smile than any actor in movies. 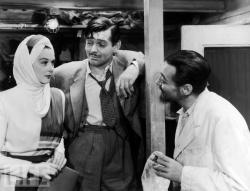 Rosalind Russell, Clark Gable and Peter Lorre in They Met in Bombay.

Eric's right, They Met in Bombay is one of those old black & white movies you used to find on television on Sunday afternoons. It is vintage Hollywood.

Rosalind Russell had costarred with Clark Gable in two other pictures, but this is the one and only time that Auntie Mame played leading lady to Rhett Butler. As Eric said they had great chemistry together and both possessed impeccable comic timing.

The wonderful character actress Jessie Ralph has a funny scene as the Duchess of Beltravers. Rosalind Russell's Anya gets the Duchess drunk and accompanies her back to her room in order to steal the necklace. Anya gets away with the jewelry but Ralph easily steals the scene with her hilarious drunken stupor.

Everything about They Met in Bombay is pure Hollywood formula. A great cast, and direction that keeps the story clipping along, make it better than it really deserves to be however. 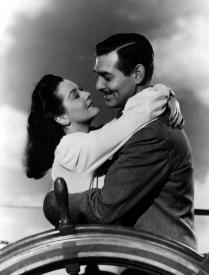 Rosalind Russell and Clark Gable in The Met in Bombay.

This movie is the perfect demonstration of the Hays Code.  Because it was made in 1941, there was only ever one way it was going to be allowed to end.  The lesson of Gable morally saving himself was required by the Code since it forbade the triumph of criminals.  In fact, the ending to almost every movie made while the code was in effect can be predicted. Take Casablanca, since rewarding adultry wasn't allowed under the Code, there's no way Ilsa was going to be allowed to leave her husband at the end.

I agree that this movie is a bit schizophrenic.  At the beginning it's light and fun.  Gable and Russell have fun trying to steal the necklace and like Patrick I enjoyed Jessie Ralph as the Duchess.  There are some funny little moments for Gable and Russell when they're sizing each other up in the barber shop and in a stalled elevator.  If they could have kept this tone throughout then it would have been better.  This first half is easily the best part.

Once Gable and Russell get on the ship with a Chinese Peter Lorre(!?!), it changes tone a bit, building up to the battle between the British army and the Japanese.  I mean, how many romantic comedies turn into war movies?  And how come nobody ever asks Gable what an American is doing in the British Army?  I know, I know.  It's Gable.  He didn't do accents.

Despite the wide ranging plot, Gable (and to a lesser extent Russell) holds it all together.  Fortunately, comedy and action are what Gable did best.