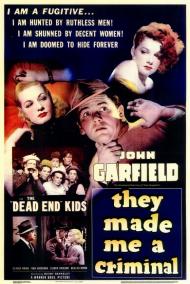 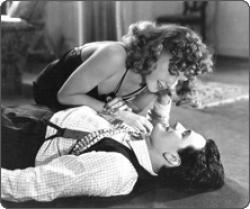 Ann Sheridan and John Garfield in They made Me a Criminal.

They Made Me A Criminal is one of my favorite old black and white movies. It's dramatic, romantic, funny and heart warming. And it stars one of the coolest actors of the 1940's; John Garfield.

Garfield plays a champion boxer named Johnny (What else?).  After a boxing match, he gives an interview to the media where he talks up his mother and acts like a boy scout. Later in his apartment we see him boozing and making out with his girlfriend, not at all the milk drinking innocent the public thinks of him.

That night a reporter shows up at his apartment and Johnny's real personality is about to be exposed. His manager kills the guy and Johnny, who was passed out at the time, takes the fall. His manager then takes Johnny's watch and drives off with his girl in Johnny's car. They crash the car and die in an inferno. Everyone thinks it is Johnny and so the murder investigation is ended.

Johnny's lawyer advises him to get out of town, as he is now considered legally dead, and if he did tell people he was still alive he would be arrested for the reporter's murder. Johnny hits the the road and ends up on a farm out west.

The farm is for wayward boys, played by the Dead End Kids. The place is in the middle of nowhere and is run by a grandmother figure and one of the boy's older sister, who Johnny immediately has eyes for.

After some initial bickering, Johnny starts to settle in and soon develops a relationship with the boys in the form of a male mentor. Then one day a barnstorming boxer comes to town, offering anyone money who can stay in the ring for so many rounds. The farm needs money and Johnny knows he can obviously win it. However boxing in such a public event will surely expose him.

They Made Me A Criminal is about repentance. It is also very relevant. In the last few years we have seen sports heroes arrested for rape, drug use, solicitation of prostitutes and many other crimes. This movie shows just how we put our heroes on pedestals and expect certain behavior from them, even if it is unrealistic.

Garfield has charm in spades. The Dead End Kids are hilarious. Love those New York accents. If only the ending was a little more solid this would be a perfect movie. 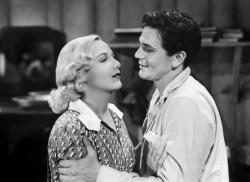 Gloria Dickson and John Garfield in They Made Me a Criminal.

Wow Eric, I'm not quite sure why this movie struck such a chord with you, but surely you over blow it's good points. At best, this is cheap melodrama and at worst it is an unintentional comedy. And hell, I'm going to go ahead and say it because I thought it while watching it, there's even some homoeroticism, whether intentional by director Busby Berkeley or not, thrown in for good measure to add camp value.

You call Garfield one of the coolest actors working in the 1940s, Eric, but I see little evidence to back up that claim based on his performance here. His acting certainly isn't that strong. I suppose he looks okay, despite seeming shorter than just about everyone in the movie, but he doesn't exactly ooze cool or charm (in spades, clubs, diamonds or hearts).

The plot is weak. Johnnie is an idiot who runs for his life (seemingly on foot most of the way from New York City to California) on the word of his lawyer that he will go to prison if he doesn't, but there is only circumstantial evidence to link him to the crime. The fact that the reporter died in Johnnie's apartment isn't enough to convict him, but everyone immediately assumes he did, which seems very odd based upon Johnnie's squeaky clean reputation up until that point.

Only Claude Rains seems convinced that there might be more to this mystery than what's on the surface. Thankfully for the plot, his character must be a fan of amateur photography contests, because the instant the back of Johnnie's head appears in a photo submitted to a photo contest, Claude Rains is all over it and is racing to California where apparently a New York police officer still has jurisdiction. I mean, forget making phone calls or sending telegrams to the California police. Claude Rains is a real do-it-your-selfer!

Another scene that made me laugh is when Johnnie and the boys are frolicking together in a water tank when a farmer opens up the sluices and begins to drain the tank. Somehow, despite the tank being barely fifteen feet across and there being about 5 people in it, none of them notice that the water is draining until the water level is so low, they're unable to reach the lip. I'm not sure what they were doing that was so distracting that they couldn't notice they were sinking into the tank, but maybe the way one of the boys caresses Johnnie's naked stomach when he's laid out after the fight is a clue!

Even taking into account the year it was filmed, the boxing scenes are pretty poorly shot. It's funny that director Berkeley could choreograph the hell out of dance numbers, but can't choreograph a boxing match at all. It's sloppy and poorly edited. The description of one of the fights by the ringside commentator is more entertaining than any of the fights that are actually shown.  "A right to the jaw. A left to the face. Boy, is he a killer. Is he murderous. The Bull lands a terrific right to Smith's jaw, and Smith is down! It'll be best for Smith if he stays down, because this is downright murder. Smith's face is red pulp; red, red pulp. 8, 9, 10! And Smith's out. Phew! And I'm glad that's over."

Eric, you recently said that this was one of your all time favorite old movies. Maybe that set my expectations too high, but even if you hadn't said that, I doubt my opinion would be much different. 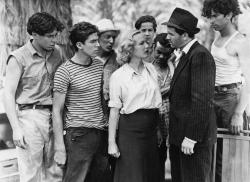 The Dead End Kids with Gloria Dickson and John Garfield in They Made Me a Criminal.

Scott, although your review is humorously written you are too hard on this likable movie. I agree with Eric that John Garfield has charm in spades. In my mind in terms of screen acting styles he was the link between Cagney and Brando. The stories emotional arc is a good one and Johnnie's redemption at the end was satisfying. The one thing I disagree with you on Eric is when you call it romantic. The love affair angle is the weakest part of the plot.

Scott, to enjoy these old movies you have to lighten up on certain plot contrivances such as Claude Rains spotting Johnnie in some obscure photography contest publication and heading across the country to arrest him. It also seems unlikely that the gang wouldn’t have recognized Johnnie from the boxing world in New York City where they are all from. Oh and just for the record the farm is set in Arizona not California.

In some ways this movie is a sequel to Dead End from 1937. That movie had the Dead End Kids living in the slums on the Lower East Side and they all had the same nick-names as in this movie. Tommy even makes a reference to their old neighborhood.

Also like Dead End, They Made Me a Criminal features Ward Bond in a bit part. He was one of the most ubiquitous character actors of the day, appearing in an astounding 21 movies in 1939 alone.

This movie has a long history. It was originally a novel called “The Life of Jimmy Dolan”. It then became a hit play called “Sucker” (Garfield’s Johnnie is obsessed with not being a sucker and according to the IMDB the word is used 19 times in the picture). It was then made into a movie in 1933 using the title from the book. It starred Douglas Fairbanks Jr. and Mickey Rooney with several of the Our Gang tots in place of the Dead End Kids. In that pre-code movie the boxer, not his manager, kills the reporter. The Hayes Code would not have allowed Johnnie to be a killer and redeem himself at the end.

There is an inside joke in the scene where the Dead End Kids give Johnnie an outdoor shower (Scott, I see your point about the homoeroticism). Huntz Hall sings a few lines of “By a Waterfall” which was a big production number directed by Busby Berkeley in the 1933 James Cagney musical Footlight Parade.

They Made Me a Criminal is not as bad a movie as Scott says it is but neither is it the classic Eric claims.  See it for yourself and decide which Movie Buff you agree with.