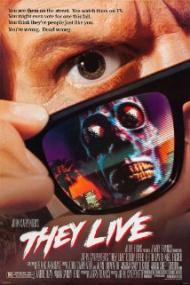 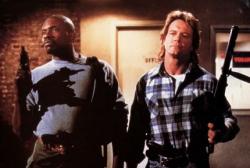 Keith David and Roddy Piper in John Carpenter's They Live.

They Live proves that sometimes all you need is an interesting premise and a sense of fun to make an entertaining movie. This cheesy sci-fi critique of 1980s' consumerism from the mind of John Carpenter is so bad that it's actually good.

The film stars professional wrestler Rowdy Roddy Piper as an unnamed drifter (he's listed as Nada in the credits, meaning "nothing", but is never referred to by any name in the film), who wanders into Los Angeles. He finds work on a construction site where he meets Frank, played by Keith David in a part written specifically for him by Carpenter who had worked with the actor 6 years earlier on The Thing. Frank takes Piper to a homeless camp where Piper stumbles across a revolutionary group who are manufacturing sunglasses. After the group is raided by the police, Piper puts on a pair of the sunglasses and realizes that with them on he can see that the world's media is filled with subliminal messages designed to keep the population passive and that the world's elite, who are controlling the messages, are actually aliens disguised as humans.

Surprisingly Piper isn't as bad of an actor as you might expect. He's best as the strong silent type, but he manages to deliver his limited dialogue in a fairly natural manner. His hair is more distracting than his acting, being a gloriously long 1980s' mullet. As you might imagine, Piper is most successful in the action scenes and the film's lighter moments when he gets to spout a few one liners, including the film's most famous line, which he reportedly made up himself, "I came to chew bubblegum and kick ass and I'm all out of bubblegum." and, "Life's a bitch and she's back in heat." He's certainly better at speaking those lines than he is in the film's attempts at drama.

When this film is remembered at all, it is usually because of the over 5 minute long fight scene between Piper and Keith David. It's been spoofed and parodied several times, including in South Park and the video game Saints Row IV, which even features the voices of Piper and Keith. Reportedly rehearsals for the fight lasted three weeks. The silliest thing about it is that the stakes behind the fight are so low. Piper wants David to try on a pair of the sunglasses, but David refuses. To force him to wear them, Piper decides to beat him into submission and David responds in kind. They then proceed to kick the shit out of each other in an alley in a fight of such excess and length that you have to admire the sheer audacity of it.

Behind all the low budget silliness there are attempts at weaving some serious themes into the story. Carpenter, who also loosely adapted the script from a 1963 short story by Ray Nelson, has said that he was drawn to the idea because of Reaganomics and the perceived widening of the upper and lower classes. One of the aliens in the film is even heard giving Reagan's "Morning in America" speech. The script's biggest target seems to be mindless consumerism. Given all the talk today of the 1%, Carpenter's message seems even more timely now. There's been talk of a remake, but so far nothing has come of it. Of course, in any remake a few alterations would be needed. For instance, here the aliens use television as their main method of getting their messages across, but today they would need to change televisions into smartphones.

Although the special effects are dated (and weren't cutting edge even in 1988), the script has a few plot holes, and the characters are under developed, it's hard to deny the sheer entertainment that this B-movie provides. There's a reason it's gained a cult following over the years.

Roddy Piper and Keith David share a moment in They Live

Yep, the script for They Live has a few plot holes, the special effects are horrible and the characters are under developed, making it not at all hard to deny some of the entertainment that this B-movie intended to provide. I have no idea why it gained a cult following over the years and am not exactly sure it even has. Until my brother suggested I watch it, I had only the vaguest memory of seeing the movie poster somewhere and no one in my lengthening life has ever mentioned it to me before. Unless, of course, all it takes to be considered a cult classic is for Matt Stone and Trey Parker to parody it.

The scene where the two heroes kick the shit out of each other in the alley is pointlessly excessive and as Scott noted, it is only so one can convince the other to simply put on a pair of sunglasses. Even my very forgiving WWE watching son looked at me, raised his shoulders and questioned, “All he wants is for him to put on the glasses.” The scene is not audacious, it is ridiculous. There is nothing bold about a long fight when the point of it is made moot if you get seriously hurt in the process. Is proving to the other guy that there are aliens worth the broken bones and stitches it is going to cost you. The idea is to gain an ally not weaken yourself for the war.

The film starts slow but picks up the pace as it goes. Once we start seeing the aliens in black and white, through the glasses, the story becomes more exciting. Scott mentioned the famous line, while my son’s and my favorite scene is near the end when a large breasted naked blonde, riding cow girl, looks down and sees that the guy she is having sex with is actually an alien who asks her, “What’s wrong babe?” My son said, “eeuuw” while I laughed out loud.

What really got me going, and likely is the reason Scott suggested this film for me, is the leftist propaganda. The not so subtle message is that Americans are blind to their economic manipulation. The sunglasses act as a means to strip away the propaganda and reveal the truth. When you put on the glasses, billboards change to signs that simply say things such as, “Consume.” Dollar bills are just pieces of paper with messages on them that read, “This is your God.” Carpenter may have been trying to make a comment on Reaganomics but it comes more across as a statement on the superficiality and stupidity of mankind. No President has ever forced their citizens to spend their money. Well, except President Obama and his mandatory health care program.

The political point is juvenile and misses whatever target it was attempting to hit. What we are left with is a mildly entertaining film with special effect that look like they were left over from some 1950s science fiction film.  There are some exciting and tense moments as Roddy Piper must avoid the aliens and execute his plan to reveal their existence to the sexually active blonde. It is only in those action moments of gun fire and chases that the movie hits an engrossing stride. Whenever it tries to make a social/political point it falls completely on the left side of its face.

Reagan sure had his haters in the 80s. Scott mentioned that this film suggests that he is an alien. I recall some people suggesting Reagan was the antichrist because each of his names, Ronald Wilson Reagan, has six letters in it. It has long been suggested that Barack Hussein Obama is an alien because he was born in Kenya or adopted by a man in Malaysia, either one making him not a citizen of the United States. Hmm, and he has a total of 18 letters in his names, which divided by three comes to 6. Cast Randy Orton and Wayne Brady and I just wrote the remake. 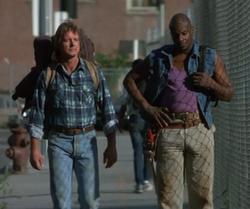 Roddy Piper and Keith David in They Live.

What a surprise, I had the exact opposite reaction to this movie than Eric did. I thought it best at the beginning when it wasn't completely clear where the story was going. Carpenter brings up an interesting point about mindless consumerism but then doesn't really develop the idea much. Once the action scenes take over, the movie stumbles and never fully regains its balance. I also thought Piper's performance got worse as the movie progressed. He's best when delivering conversational dialogue in the early scenes. Once he has to actually attempt to act he fails miserably.

As for the lengthy fight scene, I thought it was fun. It reminded me a bit of John Wayne and Victor McLaglen's knock-down, drag-em-out brawl in The Quiet Man (1952). Sure it's over the top and excessive but that's why it's remembered. And if you think about it the stakes are actually pretty high. The only way Piper can enlist his friend's help is to convince him of the truth. The only way to do that is to get him to put on the sunglasses. What would you expect a professional wrestler to do in this situation, try his hand at diplomacy? At any rate it's an exhausting battle that provides the movie with its most famous scene.

The time is definitely ripe for a remake of They Live. The age of materialism really took off during the Reagan years but compared to today it was just beginning. Look at how people rush out to buy every latest technical gadget only to discard it a few years (or even months) later for something newer. Eric, I think Carpenter was trying to make a statement about both the greed of the ruling class and the blind stupidity of the masses. The subliminal messages shown in the movie may not be subtle but if you look around at the world today they seem accurate.

John Carpenter had his own style. He's practically a genre unto himself and he made some entertaining movies back in the day. He came up with some fairly interesting ideas and They Live just might contain his most intriguing premise. The execution, however, never fully explores the film's main concept. Instead They Live is content being just another of his campy (and clunky) sci/fi horror action flicks.