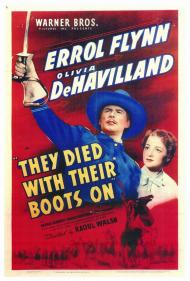 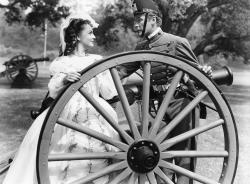 Olivia de Havilland and Errol Flynn in They Died with their Boots On.

They Died With Their Boots On was the eighth and final screen pairing of Errol Flynn and Olivia de Havilland. It tells the story of George Custer and his lady love Elizabeth Bacon from his entering West Point, through his service in The Civil War and finally to his death at the hands of Crazy Horse and his Sioux warriors at Little Big Horn.

The historical accuracy of this movie is debatable, but that really isn't the point. It is a romantic, sweeping action western in the grand old style of the classic Hollywood studio system. Flynn plays Custer as a vain braggart but one with courage and a fine sense of honor. He is the perfect physical embodiment of the part. Olivia de Havilland is reduced to playing merely the pretty woman who loves him, which is probably why she stopped making movies with him as her career reached even greater heights in the 1940's.

Veteran director Raoul Walsh helms the movie with style and energy. Although it clocks in at a bit more than 2 hours it never seems to drag. The climax is a rousing battle between Custer's cavalry and Crazy Horse's Sioux warriors and it involved more than 200 actors on horseback. The fact that the outcome is known ahead of time adds to the poignancy.

The memorable supporting cast includes Anthony Quinn as Crazy Horse and Sydney Greenstreet as Lt. General Winfield Scott. Also Hattie McDaniel, fresh from her Oscar win for Gone With the Wind, and Charley Grapewin who had recently played Uncle Henry in The Wizard of Oz.

This is definitely not a documentary type account of the life of General George Armstrong Custer. But it is one hell of an old fashioned western adventure with two great stars at the peaks of their careers.