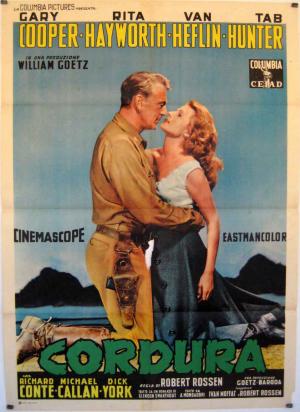 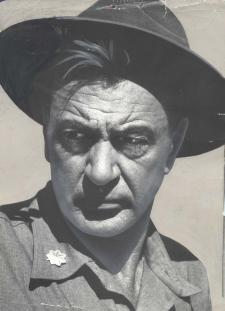 Gary Cooper in They Came to Cordura.

They Came to Cordura is a western that says something meaningful about bravery and heroism. The movie opens with a written narrative that announces just that. The makers of this movie must have worried that the film's message was not obvious enough so it had to announce it's intention ahead of time. Perhaps it was a way of trying to elevate this western to an intellectual height or prepare it's audience for less action than it may expect from a western. Either way, it was not needed.

After a large battle at a Hacienda in Mexico between American cavalry and Pancho Villa, the great Gary Cooper plays an officer, Thorn, assigned to take five soldiers and a woman, Adelaide, back to headquarters in Cordura. Thorn has a secret past of having acted cowardly during a battle. The men he is escorting all did acts of bravery during the fight at the Hacienda and Thorn is nominating all of them for The Congressional Medal of Honor. Adelaide, played by Hayworth still looking great a decade after Gilda, is being charged with aiding the enemy as Pancho Villa was staying at her Hacienda the soldiers attacked.

On the journey to Cordura, Thorn interviews the men about their particular act of bravery and takes notes about them. The men, for different reasons, are not keen on getting the award. After Thorn gives up their horses to some bandits, in order to save themselves, the soldiers become hostile towards him. Before he knows it, he has an outright mutiny on his hands as the men do not believe Thorn can get them across the desert to Cordura alive.

Cooper plays his role with his typical minimalist approach. By the end of the movie you just want Thorn to shoot these idiots and get it over with, but he is busy killing himself trying to save his own soul. The final scene where the men take his notebook and read what he wrote about them should have been, and is supposed to be, this smack of clarity after their journey has descended into madness. The direction and the lack of good acting by these B-actors, lead by Hunter, lessens what is supposed to be the emotional climax to this film.

Only Hayworth shines in this movie as the Hacienda owner with a past of her own. She spends the entire trip pissing off the soldiers by drinking alcohol and smoking cigarettes in front of them while they have neither. She has the best lines in the movie such as, “They're only men, and damn poor specimens at that,” The best line and the one that renders the preface meaningless is when she sums up the moral of the movie to Cooper, “One act of cowardice doesn't make a man a coward forever, just as one act of bravery doesn't make a man a hero forever.” Earlier in the movie Cooper says to her, “Lady, you're much to logical for a woman.”

They Came to Cordura has some missed opportunities for more action scenes, but it's message is unique and relevant. 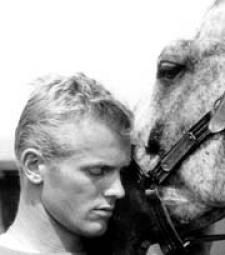 Tab Hunter in They Came to Cordura.

Rita Hayworth and Gary Cooper, both in the twilights of their careers, are the stars and the reasons for watching this unusual western, which is set in 1916 right before U.S. involvement in the first world war. I disagree that the supporting cast is all wooden. Van Heflin was a great actor and he gives the rebellious Sgt. Chawk a truly menacing persona. Tab Hunter, I think, gives one of his better performances here. I agree with Eric that Dick York and Michael Callan are both bad actors though.

The gist of the story is the fact that all of the men Thorn is recommending for the Congressional Medal of Honor turn out to be cowardly shits while the heretofore cowardly Thorn turns out to be the true hero. This is the moral that Eric quoted Hayworth's character as summing up. Interesting as that idea seems it's a fairly flimsy premise to base a movie on, especially one that is poorly executed and, as Eric mentioned, one lacking in the action department.

Westerns can be great character studies, (The Searchers springs immediately to mind), but they have to have the shoot-em-up elements we expect. They Came to Cordura doesn't and as such is a disappointment. 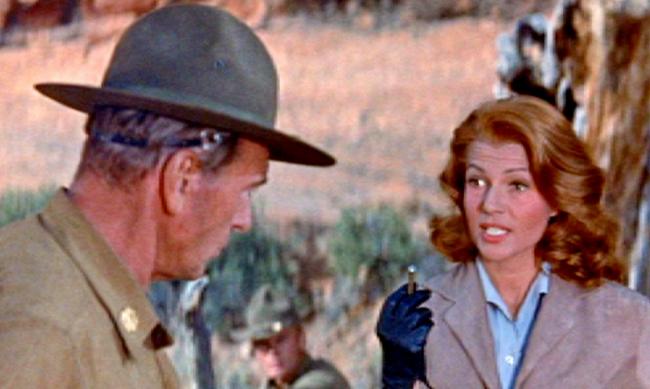 Gary Cooper and Rita Hayworth in They Came to Cordura.

I disagree slightly with Eric's opening line. I agree that this is a movie that wants to say something meaningful about bravery and heroism, but after slogging all the way to the end of it I'm still waiting to hear something meaningful on those topics. It talks an awful lot about them, but comes to no real conclusions about them except to condemn those who exhibit those traits.

While I don't always agree with the late great John Wayne's politics, I find myself in somewhat agreement with his assessment of this film. He said, "How they got Gary Cooper to do that one! To me, at least, it simply degrades the Medal of Honor. The whole story makes a mockery of America's highest award for valor. The whole premise of the story was wrong, illogical, because they don't pick the type of men the movie picked to win the award, and that can be proved by the very history of the award." And he's right in that this movie goes out of its way to depict the men in the American army as pretty scummy. Nearly all of their acts of bravery are explained away as acts of self-preservation, greed, or simple luck. These men are murderers and rapists and most of them don't even want the Medal of Honor and the one who does, only wants it because it means $2 more in his paycheck. The officer who sends Cooper's Major Thorn on his mission does so because he's pissed off that Thorn won't recommend him for the award so he can get a promotion. He admonishes Thorn saying that "officers should look after their own." In short, this movie does everything it can to make the American army look bad. In that respect this movie feels as though it should have been made 10 - 15 years later during the height of the Vietnam War rather than in the 1950s.

Cooper is his usual stoic self, but he looks even more tired than the film suggests he should. He's also about 30 years too old for the part and is nearly the same age in real life as the retiring colonel who sends him on this mission. Shortly after the film's release, Cooper would undergo surgery for the prostate cancer that would take his life just 2 years later.

Perhaps it was because of Cooper's advancing age that the filmmakers cast an older actress for the female lead. And it just goes to show you the double-standard in Hollywood that a man approaching 60 can play the lead, while a woman of 41 is considered an older actress. However, it is the casting of Hayworth that was the film's most inspired choice. She gives the finest dramatic performance that I've ever seen her give, providing a world weariness that feels more genuine than anything any of the male actors are able to provide. Another remarkable thing about her character is the fact that she has sex with one of the men to keep Thorn alive for a night, something that was clearly only allowed because of the weakening power of the Production Code.

Of the supporting cast, I agree that Van Helfin does a good job, but the rest of the cast is fairly weak. Although to be fair to them, after reading my brother's reviews I was actually expecting worse than they give here. Their performances are serviceable, without being exceptional.

Reportedly the original cut of this film was over 2 and half hours long, but the studio insisted on a shorter edit. Director Robert Rossen objected, but complied. Up until his death in 1966, he worked on putting together a director's cut of the film, but it never saw a release. Given how long this movie already feels, I can't say that I think a longer version would have done it any favors.

As Patrick wrote, the only reason to watch this is for the chance to see Cooper and Hayworth together in the same movie for the only time in their careers.