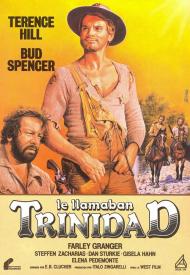 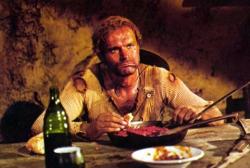 Terence Hill in They Call Me Trinity.

They Call Me Trinity is the greatest spaghetti western comedy. Filmed in Italian, Lo Chiamavano Trinita is the most famous pairing of Terrence Hill and Bud Spencer. Their real names are Mario Girotti and Carlo Pedersoli. Both took American sounding names for international appeal. They went on to make more than a dozen movies together including the sequel Trinity is Still My Name.

Hill is a cross between Robert Redford and Paul Newman. He plays a lazy cowboy, Trinity, who says, "I'm always busy doing nothing." He meets up with his brother, Bambino, who is pretending to be a sherif in a town where he "accidentally" shot the real sherif. He yells "Shut up!" every time someone greets him as sherif. They share the same mother who is currently "running a whore house in New Orleans." They go about beating up bad guys and defending some pacifist bible thumpers. One citizen tells Trinity, "This was a quiet town before you came. A disgusting town, but quiet."

Trinity is the fast gun slinger. Bambino is the muscle. Trinity shoots people as if he has x-ray vision. Bambino is so strong that he beats people up by bashing them on the head with his fist or slapping them like Moe going at Curly. One particular fight is straight out of the Three Stooges Handbook. Bambino is disguised as a pacifist who surprises some bandits by slapping them back. My nine year old and I roared with laughter.

The success of this film is due to the utter charm of it's two leads and how smoothly they bounce off each other. Terrence Hill has the best shit-eating-grin I have ever seen. I have rarely seen a foreign language film where the jokes translate so well. Thankfully, much of the humor is slapstick and thus translates very well.