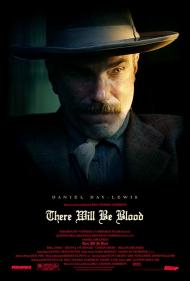 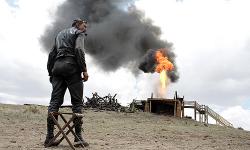 And the award for most over-rated film of the year goes to, There Will Be Blood. It has received tons of critical support, won awards and been nominated for many more. Now I hate to pull an "Eric", but I kind of suspect this has something to do with its very liberal stance and stereotyping, because, while it does have high production values and some terrific acting from its lead actor, overall it's too long, too boring, and with out much of a plot. What it does have is a greedy, psychopathic oilman and a hypocritical Christian minister as its two main characters. And as any good liberal knows, Big Business and Christianity are the enemy, right?

The movie starts strongly, with Daniel Plainview (Day-Lewis), alone in a pit somewhere in the western desert, digging for silver. The opening scenes carry on for ten minutes, without any dialogue, and shows Plainview's struggles, how he breaks his leg, and must pull himself out on his own and struggle into town. These opening scenes show you exactly what type of man he is, without a word ever being spoken. It's too bad the movie hadn't ended right then.

The movie proper begins when Plainview discovers that there is oil around a small western desert town and begins buying up all the land around it. Here's where the plot of the movie should have kicked in, but there isn't a plot so to speak. Stuff happens, but there isn't any of kind all-encompassing goal or end-point that the story is seeking. Plainview makes an enemy of Eli Sunday, the local preacher; an unlikable and hypocritical young man. Plainview's son goes deaf following an oil strike. Plainview's half-brother shows up out of nowhere and he has to deal with him. All of these things happen, but they're mostly unrelated to each other and fail to add up to a plot. And for a movie that's 2 hours and 38 minutes to not have a plot is, frankly, unforgivable.

Daniel Day-Lewis is the only part of this movie that lives up to its hype. As is usual for him, Day-Lewis buries himself in this part. He ages as the movie progresses, and it's not just with makeup. His body language and movements all change as he ages and it's impossible to tell where along the aging path, the real Day-Lewis is. His deep-throated accent is superb. Overall he is light-years better than the material.

Both the big businessman and the religious man are shown to be bad in this movie, but a better alternative isn't presented. It's hard to spend so much time watching a movie when there isn't anyone to care about. Usually you have a protagonist and an antagonist, but here you have two antagonists, although at first you'll think of one of them as the protagonist, his eventual behavior shows you that he's the opposite. If Anderson (the writer/director) wanted to condemn these two types of men, he could have at least offered an alternative. Someone fighting them both that could have been the "hero" of the story.

Visually, the movie is stunning. The production values are fantastic, as is the cinematography. From a technical standpoint, there are no complaints. It's too bad that high technical standards have nothing to do with making a good movie. You can give me a movie with the shoddiest production work, but with a great script, interesting characters and some decent acting, and I'll pick it over this movie any day. 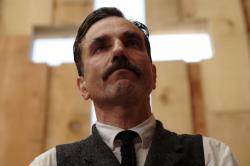 There Will Be Blood has, first and foremost, the best cinematography and performance of the year.

Visually it is like a silent movie, only with color and widescreen. The pace is purposely slow to give you time to appreciate some truly gorgeous celluloid brush strokes. The scene where a gushing oil well catches fire is brilliantly shot. In sweep and theme it reminded me of Erich Von Stroheim's silent masterpiece Greed. As for Day-Lewis, he is utterly enthralling as the hate filled oilman. His final scene is one of the great moments in screen history. And the last line is the best last line of the year. It says it all.

The story, based on the novel "Oil" by Upton Sinclair, is a character study of the dark side of human nature. I disagree with Scott. Day-Lewis is clearly the protagonist. I was able to sympathize with him for his complete inability to love. But then I have always been able to muster sympathy for the Devil. He is at least a man of character in the sense that he never shows a false image to the world. He is an evil bastard. Period. But he is also a very sad and lonely man. The relationship between him and his son is the heart of the story.

The preacher on the other hand is a complete slime ball. He’s a coward and a phony. Whereas Day-Lewis openly threatens a fellow oil man with “…sneaking into his house one night and cutting his throat”, the preacher constantly lies about his actions and motives.

Scott, your last paragraph, although it's cleverly written, is just as snobbish as the so called movie snobs you so disdain. You suggest that no one could genuinely like this movie and that those who do are merely being pretentious. I disagree. I went into it not expecting to like it and I did think the first hour was slow. But, thanks to the amazing acting of Day-Lewis, I found myself caught up in this horrible man’s life. He is a fascinating character and There Will Be Blood is one of the year’s best movies. 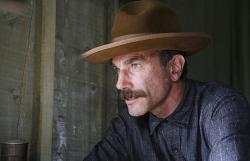 There Will be Blood is a good film in that it is allegorical to conservative America as seen through the eyes of liberalism. Daniel represents America. He starts out struggling and then discovers wealth, in oil of all things. He is greedy and jealous of others successes. He has to be number one. He uses and controls all around him to his advantage. This has often been how socialist Europeans have seen The United States. Eli is, of course, corrupt because that is the only way liberals can deal with religious people.

Another issue I have to take up with Patrick is his liberal hypocrisy. In reference to Daniel, he wrote that he is, "...able to muster sympathy for the Devil. He is at least a man of character in the sense that he never shows a false image to the world. He is an evil bastard. Period. But he is also a very sad and lonely man." He then wrote that, "The preacher on the other hand is a complete slime ball. He's a coward and a phony." You could not be more biased if you tried Patrick. Daniel is as big a phoney as the preacher. To get his pipeline he gets in front of a congregation and pretends to be saved. He lies to the Sunday family in order to drill for oil. According to this movie, religion and big business are hand in hand self serving establishments. Each provide a service to people while they each seek their own gain. Interesting that Patrick only sees the flaw that both men have, in the minister. One of the things I like best about religion is that it really puts liberals, like Patrick off.

As for the production value of the movie, it should certainly win some awards. However, I found Lewis's performance to be hammier than an Easter dinner. I almost laughed when he chased Eli down the bowling alley, shouting and pointing his finger.