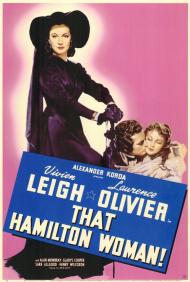 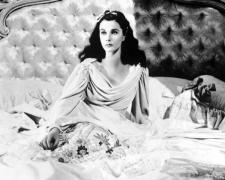 Vivien Leigh as Emma Hamilton in That Hamilton Woman.

That Hamilton Woman is reported to have been Winston Churchill's favorite movie. Some even go so far as to say he requested it be made and had a hand in writing a few scenes of dialogue. He once claimed to have seen the film over 80 times. Released in 1941 when England stood virtually alone against the Nazi menace, it's easy to see why he would it enjoy it with its clear parallels to the then present situation.

The film tells the story of the notorious love affair between Lord Nelson and Lady Hamilton against the backdrop of the Napoleonic wars.

Emma Hamilton was a woman who pulled herself up from the gutter using her beauty, her charm and her body in an era when class distinction would normally make such a thing impossible. As played by Vivien Leigh at the height of her beauty, it is easy to believe that she accomplished it.

At the start of the film she is traded as mistress from a nephew to his uncle for 5,000 pounds. The man she is traded to (Lord Hamilton) is the British Ambassador to Naples. He is a collector of beautiful things and means to add Emma to his collection. Meaning merely to make her his mistress, Emma charms him into making her his wife. While she is happy to live in luxury and genuinely seems fond of Lord Hamilton, there is no chemistry between them. When Admiral Nelson appears one day looking for aid in fighting Napoleon's navy, it is Lady Hamilton, with the ear of the Queen of Naples, who is able to help him. It is with Nelson (played by Leigh's real life husband Olivier) that she shares chemistry galore.

Right from the prologue of the film you can see that this isn't going to be a love story with a happy ending. This adds poignancy to the love affair and keeps the story not only historically accurate but believable. You can see right away that there's no way in that era for these two to have a happy ending.

The scenes that Churchill would have enjoyed and might have written are easy to pick out. Several times Lord Nelson makes impassioned speeches railing against Napoleon and those who would try to make peace with him. He condemns countries who cower before dictators and praises the bravery of England who is willing to stand alone in the cause of freedom. I'm sure it resonated not only with Churchill but with all of England during their "finest hour".

It's not the propaganda or the battle scenes that make this movie work though. It is the vivacious and charismatic Vivien Leigh who does that. It's quite easy to see why all of the men in this movie fall in love with her. She is beauty, charm and grace personified. If the movie seems to drag on for too long at times, it is only because there are too many scenes without her.

You can enjoy this movie simply as an old fashioned romantic epic, or you can read between the lines as Churchill did and see it as part allegory for Britain's situation at the start of World War II. Either way you do it, this is still a classic love story. 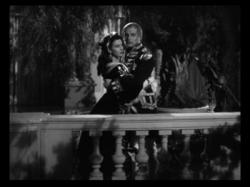 Vivien Leigh and Laurence Olivier in That Hamilton Woman.

I agree this is a classic love story featuring one of the most attractive and talented screen pairs in movie history, in this their third and final movie together. Vivien Leigh is as radiant an actress as ever graced the silver screen and I wholeheartedly concur with Scott’s opinion of her. Laurence Olivier is likewise riveting to watch. His death scene is brilliantly done and is followed by Leigh’s best moment where she learns of his demise. The movie sparkles whenever they are onscreen together.

Unfortunately there are scenes without them. The movie, while always interesting, runs too long. I find it fascinating that Winston Churchill was such a huge fan as this is essentially a woman’s picture, being told from Lady Hamilton’s point of view. There is really only one big action scene, an extended naval battle which comes at the movie’s climax. Although, as Scott mentioned, the parallels between Napoleon and Hitler are obvious and it's easy to see how this movie would have inspired Churchill during WWII.

The scene where Lady Hamilton first meets Lord Nelson is my favorite. She impresses him immediately as it is she, and not her husband, that quickly provides the military aid he seeks. Whereas the Ambassador to the Court must use official channels to get to the King of Naples, his wife simply waltzes in to see the Queen and makes her request personally. This scene also provides some levity as the King and Queen have 15 children all running amok around the throne room.

The reliable Gladys Cooper plays the thankless role of Lady Nelson. She portrayed brittle upper-class bitches better than anyone. Her few scenes leave a lasting impact and make you root even harder for the star crossed lovers.

One impossibly romantic scene has Lord Nelson and Lady Hamilton on a moonlit terrace on New Year’s Eve of 1799 (see photo above). As the bells ring in the new century Lord Nelson gives an impromptu speech, “What a century it's been: Marlborough rode to war, and Washington crossed the Delaware. Louis XVI, and Marie Antoinette. The last of the Stuarts. Peter the Great. Voltaire. Clive of India. Bonaparte...” To which Lady Hamilton merely whispers, “Nelson…”

Despite its excessive running time I agree with my brother. That Hamilton Woman is still a classic love story. 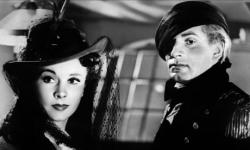 Vivien Leigh and Laurence Olivier in That Hamilton Woman

That Hamilton Woman is the tale of a tawdry tryst that turned the tides of history.  Lord Nelson and Lady Hamilton were both married to what are portrayed as passionless spouses.  They find heat and joy in each others company, while each of their significant others react differently.  Lady Hamilton's husband is fully aware of the affair and seems unconcerned by it.  Mrs. Nelson swallows her bitter pill with a tall glass of disdain.   Their affair seems known by everyone and is the talk of the town.  Modern media whores like Kim Kardashian can trace her path to fame back to the likes of Lady Hamilton.

Winston Churchill may have liked this film but I wonder if he truly liked it or just said so to promote the propaganda.  The scene where Lord Nelson states quite passionately, "You cannot make peace with dictators.  You have to destroy them, wipe them out."   speaks for itself, considering this is a British film released in 1941.

I however, found this highly romanticized story to be quite melodramatically dull.  Patrick mentioned the New Years Eve scene, which also contains this line spoken by Leigh to Olivier, "Why do we always meet, just to say goodbye?"  There is a brief scene with the two having a laugh during a poker game but far too often they seem miserable together.

The dialogue is filled with romantic prose.  The best example is when Lady Hamilton is seeing Lord Nelson off.  Lord Nelson's hat casts a dramatic shadow over the lower half of Leigh's face, accentuating her eyes.  He then says with all sincerity, "I know that I must not come back...and I know that nothing in this world can keep me away."

Viewing this film now, one particular line of dialogue took on a whole new hilarious meaning.  In the house of Lords, Nelson says, "I am therefore, in my inner most soul, a man of peace.  Yet, I would not for the sake of any peace, however fortunate, consent to sacrifice one jot of England's honor."    However, Lord Nelson did in fact sacrifice England's honor for a "piece" (of ass).

I agree with Scott and Patrick that Vivien Leigh is gorgeous as hell here.  She is basically playing a variation of Scarlett O'Hara.  Like that classic heroine, Lady Hamilton does not have a good reputation and will do whatever it takes to survive.  She uses men and is the source of much gossip.  Gone With the Wind was however, a vastly more entertaining film, thanks in part to the character of Rhett Butler.  Had this been told more from Lord Nelson's point of view, and had he been more than just a romantic sad sack, I would have likely enjoyed it more.