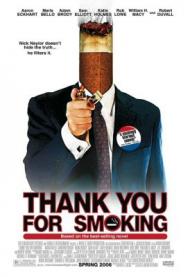 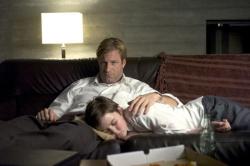 Thank You for Smoking is one of the greatest satires I have ever seen! Although it may at first seem like an attack on the tobacco industry (and it is), it is also an assault on lobbyists, the media, activists and politicians. All of these organizations do the same thing; they spin their opinion to the public to try to persuade us to see things their way. None are any better or worse than the other. All will lie, stretch the truth or tell half-truths to make themselves look good.

Eckhart plays Nick, a tobacco lobbyist and spin doctor. He describes himself as, "You know the guy who can pick up any girl? I'm him. On crack." The best thing about his character is that he knows full well that he is peddling a dangerous product. Or as he says, "My job requires a certain... moral flexibility." He just doesn't care. Eckhart does his best work here. One of the funniest scenes is when he goes to his son's career day at school. As he walks in to the classroom, his son whispers to his smiling face, "Please don't hurt my childhood." By the end of his speech he has pretty much convinced the classroom of children to try smoking.

Although Eckhart shines with smarmy charm, the supporting cast is great as well. Simmons is making a career out of playing abusive bosses. At one point he yells at his executives, "Now go bang your fucking' brains on your desks until something useful comes out!" Macy is also good as the Democrat senator from Wisconsin who wants to put a skull and crossbones on every pack of cigarettes.

Nick has dinner every week with an alcohol lobbyist and a firearms rep. They compare death counts and brag about how much they have to lie to people. They call themselves the Merchants of Death or MOD squad. This movie could have just as easily made this one sided, but we see early in the movie how the opposing players manipulate and spin just as much. On a television talk show, an activist against smoking is shown using a cancer victim for pity's sake.

This movie shows that both sides of the argument only tell the public the parts of the story they want us to hear. In front of the cameras they smile and lie to our faces. In private the Senator berates his associate for not finding a more pathetic looking cancer victim and Nick's boss yells at his employees, "We don't sell Tic Tacs, we sell cigarettes. And they're cool, available, and addictive. The job is almost done for us."

Directed and written by Jason Reitman, son of Ivan, based on the book by Christopher Buckley, Thank You for Smoking is that rare, intelligent, dark comedy that Hollywood seems to be incapable of making. 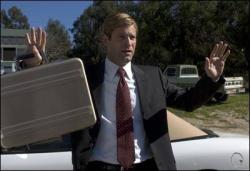 This is a good movie, but it's not quite good enough to earn four stars.

First, a movie about smoking in which no one actually smokes? Nick supposedly smokes, it's what saves his life when he is plastered with nicotine patches, but you never actually see him light up. WTF?

And second, I couldn't really buy into the fact that Nick spilled his guts to Heather the reporter. He makes his living on lies and spin doctoring and yet he tells everything to her? If he was supposed to be so in love with her that he let his guard down, the movie doesn't do a good enough job showing it. All I got out of their relationship is that he enjoyed sleeping with her, not that he fell in love with her.

Apart from those things, the movie is funny and accurate in that it shows to what extremes both sides of any issue, not just smoking, will go to try to make their point. The attempt by the Senator to try to install an image of a skull and cross bones on the side of a pack of cigarettes is one example. As if adding that image would actually cut down on smoking. As Dennis Leary pointed out in one of his routines, and as an ex-smoker I concur, you could make the packaging black, brand them Death cigarettes and make the label say, "These will kill you", and people would still be lining up to buy them.

Perhaps not quite as great a satire as Eric has claimed, but a funny movie nevertheless. 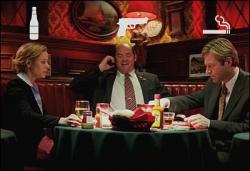 Maria Bello, David Koechner, and Aaron Eckhart in Thank You for Smoking.

Yes it's funny and it does attempt to take a fair and balanced viewpoint, but ultimately it's an anti-smoking film. As Scott pointed out, how else can you explain why a movie called Thank You for Smoking refuses to show a single character in the story actually smoking? When asked about it in an interview, director Jason Reitman explained it like this, “What I wanted people to think about was political correctness. I wanted them to think about ideas of personal responsibility and personal choice. I think cigarettes are a wonderful location for that discussion because cigarettes are something we know all the answers to. I wanted to look into this idea of why we feel the need to tell each other how to live and why we can't take personal responsibility for our own actions when we fall ill from things that we know are dangerous.” If that is truly how he feels, I fail to understand just why he felt the need to be politically correct by omitting actual smoking from the picture.

I agree with Eric that the cast is good, especially Eckhart in what is probably his finest screen performance. He perfectly suits this smarmy but incredibly persuasive character whose personal motto seems to be, “That's the beauty of argument, if you argue correctly, you're never wrong.”

The script is very funny. I enjoyed the scenes with the MOD squad but, like Eric, I laughed hardest at the scene in his son's classroom. He cross examines one young student after they speak up in class. Student: “My Mommy says smoking kills.” Nick: “Oh, is your Mommy a doctor?” Student: “No.” Nick: “A scientific researcher of some kind?” Student: “No.” Nick: “Well, then she's hardly a credible expert, is she?” He goes on to say, “My point is that you have to think for yourself. If your parents told you that chocolate was dangerous would you take their word for it?” The students all answer “No” in unison. Now realizing he has them, Nick goes for the kill. “Exactly! So perhaps instead of acting like sheep when it comes to cigarettes you should find out for yourself.” A brilliantly funny scene.

The Hollywood satire section of the movie is also hilarious. Nick correctly states the problem from the tobacco industry view point. “These days, when someone smokes in the movies, they're either a psychopath... or a European.” He then says, “The message Hollywood needs to send out is 'Smoking Is Cool!'” He further elaborates, “Now what we need is a smoking role model. A real winner.” Rob Lowe as the Hollywood producer replies, “Indiana Jones meets Jerry Maguire.” Nick: “Right, on two packs a day.”

Thank You for Smoking is a very funny satire that talks the talk but doesn't quite walk the walk, if you know what I mean.