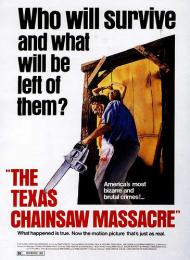 The most disgusting family ever!

For my money the original Texas Chain Saw Massacre remains the most terrifying horror movie ever made. The whole gritty low budget pseudo-documentary style ups the creep factor and Leatherface and his entire deranged family are the freakiest, sickest villains ever. The subtitles and narration (by a young unknown John Larroquette) which sets the scene is designed to give the viewer the idea that this is a true story (it isn’t). We are even given an exact date for the day’s horrific events, August 18th, 1973.

For those unfamiliar with the story you may want to stop reading now as I'm going to give away some major plot points.  It concerns five young people (3 guys and 2 girls) that set off one fine summer day in a van (pure 1970’s) in rural Texas. One of the girls, named Sally, and her wheelchair bound brother, Franklin, want to be sure their grandfather’s grave has not been dug up after a grisly discovery of bodies and/or body parts being removed from their final resting places has been reported on the local news.

After leaving the cemetery with the peace of mind that Grandpa’s grave is undisturbed the kids make a fateful mistake when they stop to pick up a hitchhiker. He turns out to be deranged, he cuts his own hand with a knife and then when the kids refuse to alter their route to take him home the guy cuts Franklin’s arm. They manage to kick him out of the van and continue their journey but not before the deranged hitchhiker leaves a bloody mark on the side of the van.

Next they stop at a remote and rundown gas station only to be told that the station’s gas tanks are empty. They then make the decision to visit Grandpa’s old nearby deserted house. When one of the guys and his girlfriend go next door to see about borrowing some gas all hell breaks loose and the rest of the movie is a series of grisly discoveries and disgusting carnage.

Spoiler Alert:  Stop reading if you have never seen this movie.

Eventually Sally is the only survivor of the 5 kids and she spends the last 30 minutes of the movie experiencing the worst psychological and psychical torture that any character has ever endured on the screen. By the time Leatherface and his brother, who turns out to be the deranged hitchhiker, stick Sally’s bleeding finger into their wizened old barely-alive grandpa’s mouth and he begins greedily sucking her blood you feel as if you yourself have been through the ringer.

Writer/director Tobe Hooper did a great job with what was obviously a small budget. There is not a lot of blood being splashed across the screen but what red stuff we do see is gross and real looking. The garish make-up and wig on Leatherface at the end is grotesque beyond description. The use of extreme close-ups of Sally’s terrified eyes is well done.

The scare factor of this movie has stood the test of time. It is just so damn sick. And unlike the Halloween, Friday the 13th and Nightmare on Elm Street movies there is absolutely nothing supernatural about the bad guys. The ending is a welcome relief. You can exhale as Sally rides off in that heaven sent pick-up truck screaming her head off as Leatherface does his macabre rage-filled dance in the street with his chainsaw.   The Texas Chain Saw Massacre is an 83 minute horror fest of the first order. 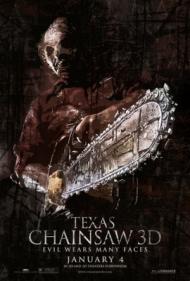