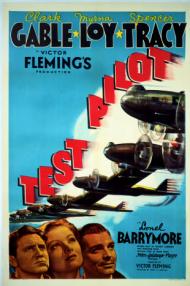 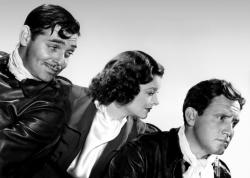 Test Pilot is a well acted comedy/drama with an all star cast. With humor, drama and action this movie succeeds in many ways. The cast is only occasionally bogged down by some melodrama.

Gable plays Jim, a cocky, party boy pilot. Tracy is his straightlaced, serious minded mechanic and best friend, Gunner. Upon testing a plane on a cross country flight, Jim lands in a Kansas farmer's field. The farmer's daughter, Ann, played by Loy, falls madly in love with Jim and he with her.

The early part of their relationship is filled with funny scenes. She gets excited at a baseball game, so Jim sides with the team she hopes will lose just to get her going. In another scene Jim and Gunner go shopping for a nightgown for Ann as she watches from a distance laughing. When all three are in a cab together Jim says to Gunner, 'I rue the day, I'm picking up words. She went to college.'

The movie also has many dramatic scenes. Some work well. Such as the one where Ann and Gunner discuss just how hopeless her marriage to Jim is. Other scenes have some overly melodramatic dialogue such as when Ann says to Jim, 'It was a thrill to see you come out of the sky. It will be a greater one to see you disappear in it.'

Gable is one of my favorite old time movie stars. He always played an 'I don't give a damn' character, who really did. It just takes a good woman and an hour and a half of celluloid to discover it.

The movie is really a love triangle between the three leads. Gunner and Ann share revealing scenes that Jim is not privy to. They never have a romance but they understand each other in ways that Jim and Ann do not. This is a great character story. 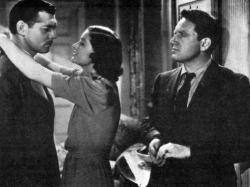 Eric's right. This movie features three great stars at the peak of their talents in a story that is both funny and dramatic.

After a decade in Hollywood Gable had perfected the daring, hard-drinking, masculine, ladies man. It was a character that he would own for the next twenty years. Cooper and Grant were too pretty and Cagney and Bogart too rough; Gable had the best of both worlds. He was ruggedly handsome and charmingly cocky.

Tracy was simply THE most natural actor in front of the camera and he didn't need any "Motivation" like the later Method generation. He just went out there and talked and made you believe every word.

Myrna Loy was just about the perfect woman. She was beautiful, glamorous and sophisticated. She was also a great sport with a winning sense of humor. In Test Pilot she proved she could handle drama as well as comedy. Although it is a bit of a stretch to accept that until she met Gable's Jim, she was, "Just a country girl sittin' on a fence on a farm in Kansas."

Spencer Tracy does have a rather thankless role but then what other man in a Clark Gable movie didn't? Audiences, after all, weren't paying good money to see him kiss Myrna Loy.

Eric didn't mention the many aerial scenes in Test Pilot. Some of them are quite good. Especially the one where Gunner is killed. His death scene is reminiscent of the silent classic Wings. Movies today rarely show such a close emotional bond between men. It is out of fashion. The relationship between Jim and Gunner is sentimental chivalry. Jim is the most important person in Gunner's life. Gunner takes care of Jim and Jim inspires a hero worship in Gunner. Gunner's last words are that he would come back only for Jim as tears run down Jim's face. It is a powerful moment.

One bit of trivia that I find amusing is connected to the scene where Jim's boss, Mr. Drake, rides in a jeep with General Ross. It's amusing because of the actors not because of the characters. Mr. Drake is played by Lionel Barrymore and General Ross is played by Samuel S. Hinds, both of them are best known today as Old Man Potter and Peter Bailey in It's a Wonderful Life.

One thing I love about classic Hollywood movies is the fact that they wear their hearts on their sleeves. They are straightforward and honest. What you see is what you get. Watch Test Pilot and see for yourself. 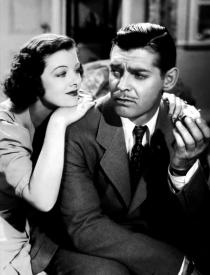 Sure, this movie isn't perfect. With such a great cast though, who cares! I'll put up with a lot of flaws in a movie that stars Clark Gable, Spencer Tracy and Myrna Loy. As my brothers both said, those are some of the greatest old time movie stars of all time.

My biggest problem with the movie is that it starts as a light hearted romantic comedy, but then moves way too far into melodrama.

Gable and Loy meet cute on her farm and spend the day flirting and falling in love with each other. The first 45 minutes are fun and sweet. Tracy plays the third wheel to their relationship, but he shares a great chemistry with both of them. He's Gable's best friend, but he also becomes something of a confidant to Loy as well. His grumpiness is a nice contrast to their silly banter.

Once people start dying, the story takes a darker turn. The problem is that it all feels like a melodramatic soap opera. One of the deaths does evoke some genuine emotion, but by the time Gable is crying in front of Lionel Barrymore's desk, it feels as though you're watching a completely different movie than the one you started with.

Until I watched this movie, I'd never realized how much it had inspired 1991's The Rocketeer. That movie also featured a dashing young test pilot, his grumpy old mechanic and his beautiful girlfriend. Just watch the way Alan Arkin uses his chewing gum in the same way that Spencer Tracy does in this one and you'll see that it's no coincidence. Of course, not even the great Alan Arkin and the beautiful Jennifer Connelly can come close to Tracy and Loy, and Bill Campell is certainly no Clark Gable.

Despite it's uneven tone, there's still a lot to like about this movie. With such a trio of stars, how could there not be? 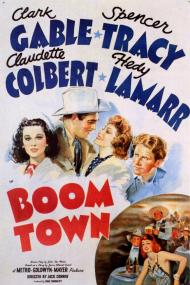 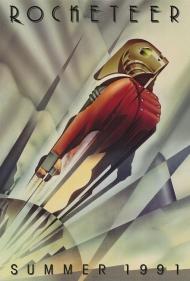