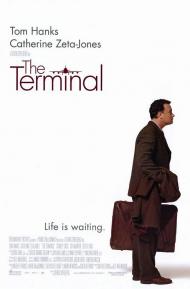 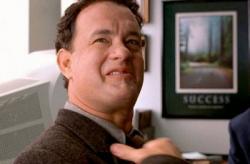 Tom Hanks in The Terminal.

Steven Spielberg appears to be making movies in pairs. Back in the nineties he made the WWII epics Schindler's List and Saving Private Ryan then at the beginning of the new millenium there came the slightly edgy sci/fi movies A.I. and Minority Report. Now he gives us The Terminal a feel good comedy that nicely bookends Catch Me if You Can. Tom Hanks, meanwhile, has found the perfect inverse of his movie Cast Away. He is fat in this instead of thin, is stranded in an airport terminal instead of on an island and instead of being alone he is constantly surrounded by thousands of strangers.

Hanks is Viktor Navorski. While his flight to New York is in mid-air a war breaks out in his homeland, the fictional Eastern European country of Krakozhia. Due to beaurocratic redtape - that is never completely plausible - he is unable to enter the United States or to go back home. In other words he must stay in the airport indefinitely. This is your basic fish-out-of-water set-up. Initially he speaks only a few words of English and is overwhelmed and confused by his new environment. Soon he figures out a few basic survival tricks and has a few mild confrontations with airport boss Stanley Tucci. He is up for a promotion and Viktor is a thorn in his side. But before you can say 'happily ever after' Viktor is making friends with all of the airport employees, doing impressive construction work on an unfinished section of the terminal (he also 'lives' in this area - gate 67), and wooing a beautiful American flight attendant (Zeta-Jones).

Despite the situation comedy set up (or perhaps because of it) The Terminal fares best when it is being funny. Hanks' accent is wonderful and he really seems to be enjoying himself. He also gets great assistance from the supporting cast, especially Barry Shabaka Henley as a paranoid plate juggling janitor from India, and Diego Luna a love sick young airport employee who supplies Viktor with food in exchange for information about the object of his affections. She is the woman whose job it is to stamp passports either accepted or denied.. Every day Viktor fills out the proper form and submits it to her for judgement.

Poor Catherine Zeta-Jones. Not only is she underused (we are never for a moment allowed to forget that this is a star vehicle for Hanks) but her character is not only basically pathetic but totally unbelievable. This drop dead gorgeous woman is hopelessly in love with an older, married man who treats her like a door stop. Like when I picture a lonely, desperate woman Catherine Zeta-Jones is the first one that comes to mind.

Visually it's stunning. The entire terminal was designed, engineered and built just for this movie. Spielberg captures the ethnic diversity and multi-culturalism of New York's JFK and it looks as if the costume designer, Mary Zophres, had her hands full creating the wide ranging, colorful ensembles worn by the hundreds of extras that file through the movie in a continuous stream.

It is only when we are supposed to feel something other than humor that the movie misses a step. Emotionally Spielberg is a bit too heavy-handed particularly in the scenes between Hanks and Zeta-Jones. Their romance is easily the plot's weakest link.

Fortunately The Terminal spends most of its energy inducing laughter or at least a smile. In a way it is refreshing to see Spielberg and Hanks in light weight mode. Neither one is wrapped up in trying to send a message. This movie is intended to make an audience feel good and - in spite of its convoluted plot devices, clichéd characters and old fashioned hoekum - it succeeds. 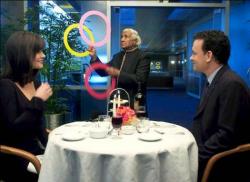 The premise to The Terminal seemed intriguing. Spielberg directing Hanks again, seems like a sure bet. The ever charming and very beautiful Catherine Zeta-Jones, enhances any movie in which she appears. With so much going for it, I had difficulty believing Patrick's review wasn't more of a reflection on the mood he was in the day he saw it, rather than an accurate depiction of the movie. I was right about one thing. Patrick's appraisal of The Terminal isn't quite right. He was far, far too kind.

The Terminal is so sickly sweet, that it should come with a warning label for diabetics. Every single character, apart from Stanley Tucci's, is so completely and dopily loveable as to make you want to reach for a vomit bag. In fact, Tucci, who's supposed to be the villain of the piece, comes across as the only person who has any depth to him at all.

Patrick's right when he says this movie worked best when it was trying to be funny. The dinner scene between Viktor and Amelia is amusing, even though it makes no sense that Amelia barely questions Viktor about why they're eating like this, since she is unaware that he is actually living in the airport.

This movie could definitely be a sitcom. It could be the adventures of Viktor Navorski. Each week, the wacky, homeless, Karkosian man, living in JFK, could help out stranded and delayed air travelers with down home wisdom and a funny accent. Talk about "Must Miss TV"!

As for the romance between Viktor and Amelia, Patrick is right that it is a weak plot point. At most, I can see these two characters becoming casual friends, but never lovers. And the grand moment of their first kiss is so laughably over the top as to be ridiculous.

The only feeling this movie left me with was the strong desire to go home and brush my teeth to get rid of the cotton candy residue it left in my mouth. 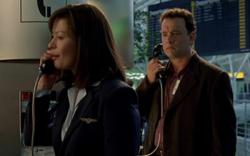 Sentimentally sweet movies are not necessarily a bad thing. It just depends on how they are handled. The Terminal asks the audience to except the fact that this man is willing to wait 9 months for an autograph. All of this time he could have just walked out the door, got his autograph and then hung out in the city until the war was over. The security director made it plainly clear that he did not care if he left.

The movie also never explains why everyone becomes so fond of him. Just because you see someone every day does not mean that you have to like them. Tom Hanks plays Viktor almost as if he is retarded. Yes he is a fish out of water but he fumbles with crackers and in trying to bathe in a sink as if he is a child. He almost plays Viktor like an overweight version of his man/boy character, Josh, from Big.

The romance between Hanks and Jones is just fine. That is to say, they do not end up together and that is okay because there is never any chemistry between them. As friends they work. I can't even picture them as lovers. His retarded, heart of gold, foreigner clashes with her sad globe trotting slut (come on she's bedding a married man) like wearing a tuxedo jacket with blue jeans.

The Terminal asks the audience to blindly buy into a bunch of sap. This movie takes a bunch of characters who all have flaws and then shows them as being noble and caring. The unique angle is that Viktor lives at the terminal. The way all of the characters hang out and get married at work, you would think that everyone lives there. It's never a good feeling to watch a DVD and think to yourself that I should have rented something else, but I said that to myself several times during this viewing.