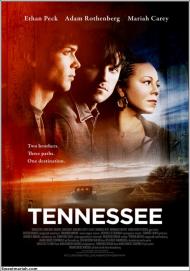 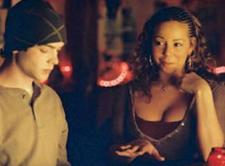 When younger brother Ellis (Peck) is diagnosed with leukemia and older sibling Carter (Rothenberg) turns out to be a bad match as a bone marrow donor, the brothers set out from their home in New Mexico to return to Tennessee where they hope to locate their estranged father and persuade him to act as donor. In the movies’ opening scene, set in 1993, we are shown the abusive relationship between the boys’ parents and how they escaped with their mother from their father’s violence and started a new life several states away. In the intervening years their mother died and the brothers had no contact with their father.

Somewhere in Texas the brothers are befriended by Krystal Evans, a waitress/aspiring country singer (Carey) in an abusive relationship of her own. She throws fate to the winds and joins the brothers on their trek. These three lost souls find strength in each others companionship as they are being pursued across state lines by Krystal’s police officer husband. Part road-movie, part coming-of-age drama with some humor thrown in, Tennessee moves along briskly and features appealing performances by its three stars.

Adam Rothenberg gives the best performance as the older alcoholic brother bitter at life and what he feels he’s been cheated out of. He reminded me quite a bit of Heath Ledger’s Ennis Del Mar from Brokeback Mountain, speaking infrequently and holding in his emotions. Ethan Peck does a good job in a slightly less showy role. The main thing his part called for was the ability to act convincingly sick. As for Mariah she definitely underplays Krystal. She pulls off a believable southern accent and manages something that she is not known for as a singer and that is subtlety. Not until she sings in a Nashville honky-tonk near the end does MARIAH the star peek out.

The denouement features a dramatic twist that is fairly easy to spot and the emotional impact is not quite as great as director Aaron Woodley was clearly trying to achieve. But then this is only his second feature film. I was thoroughly entertained by Tennessee and wholeheartedly recommend it. 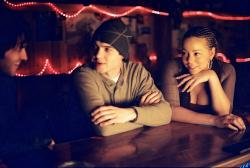 My brother-in-law is a huge Mariah Carey fan and his fondness for her clearly influenced Patrick's opinion of this movie and her performance.  She is a great singer but her performance demonstrates that she should keep to it.  Patrick wrote that she "...definitely underplays Krystal."  I saw it more as having no clue how to play Krystal.  She never seems comfortable.  Her "believable" southern accent is the only thing subtle about her performance.  She should not have even bothered to try one.  The most natural thing about her performance is the extra weight she had then.  With her hair pulled back her head looks round and puffy.

The bigger flaw than her acting is the script itself.  Every scene is overly dramatic.  One brother is suffering from leukemia while the other is a drunk, haunted by his past.  Krystal is running from her abusive husband.   It is like several depressing Lifetime movies packed into one.

These are three miserable people with horrible prospects.  I nearly laughed unintentionally when Carter hands Krystal the notice of a singing contest.  Her singing in the dive as her husband walks in is in fact the film's best moment, but it betrays the rest of the movie.  What was a film about three sad people suddenly turns into A Star is Born, even though it is underplayed.  Her singing melts her husband's heart and of course she wins the contest.  I told you she is a great singer.

Screen writer Russell Schaumburg has yet to have another script made into a movie and I for one am not surprised.   He wrote one dimensional characters that never become at all real.  The brother's dad is sadistic to the point of evil.  At one point he hits his young son for guessing wrong to a question he asked.  Krystal takes up with the brothers and funds the trip because one of them talked sweetly to her?

This is a depressing little film about three miserable people.  I liked them as much as it is possible to, but really just wanted the movie to end.  The ending is a bit sweet, but it is not enough for me to wholeheartedly recommend it. 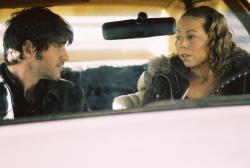 Eric's description of this movie as a Lifetime movie of the week is an apt one, even if he is overly harsh regarding Mariah's acting ability. If nothing else, her appearance takes the focus off of the depressing life of the two brothers for a short while in this bleak melodrama.

Patrick once wrote in an article that unfavorably compared modern movies to old that, "As for today's acting being more naturalistic that is well and good if you want acting that you could get by standing on a street corner and watching the world go by. I, for one, don't want to hear people talking in a movie the way they talk in everyday life. If I did I'd rent a documentary. Besides I hear more interesting lines on the subway than I hear in most modern movies." If this movie had been released at the time he wrote that article then he could have held it up as a prime example as just that kind of acting and dialogue. It's very lowkey, natural and as boring as listening to the troubles of people you've never met and aren't sure you'd like even if you got to know them.

And boring is the root of this movie's problems. Although it's true that not every movie needs to be an escape from life, when one isn't, it still needs to give you a reason to watch and this one doesn't provide you with that reason. The storylines are all depressing, despite the mildly hopeful ending. The acting and writing are fine, but nothing special. It's a mundane, slice-of-depressing-life story that I can't imagine will inspire multiple viewings by anyone apart from Mariah Carey fans.

Patrick, what you found thoroughly entertaining about this movie is a mystery to me. Entertaining is the very last adjective I would ever use in connection with it.