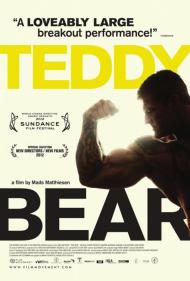 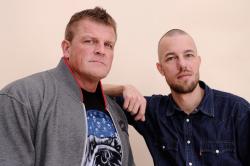 In 2007, Mads Matthiesen directed Dennis, a short film written by himself and Martin Zandvliet. In 2011, he turned the award winning short into a feature length film. It earned Mads Matthiesen a best director award at the Sundance Film Festival.

Teddy Bear tells the story of a painfully shy body builder. Dennis is 38 and still lives with his widowed mother. The film begins with him on a date that is not going very well. Dennis is a man of few words and the dinner conversation is going down hill faster than an Olympic skier. They part ways and Dennis goes home to his mother, whom he had previously lied to, telling her he was going to a movie with his workout buddy.

Dennis's mother is the antagonist in his life. She is extremely controlling over him, using emotional blackmail at every opportunity to keep him close. Dennis on his part allows this to happen out of some sort of obligation. To better understand their relationship, I highly recommend you watch the short. Mads Matthiesen should have re-shot some of the short and included it in this film. It better describes the mother/son relationship. It should have been the first fifteen minutes of this film.

Dennis and his mother attend a dinner party where an Uncle of Dennis's introduces the family to his new bride, who he recently brought over from Thailand. This gives Dennis the idea of going there to find a wife as well. With information from his uncle and a lie to his mother about a body building competition in Germany, Dennis sets out on a life changing journey.

Once in Thailand Dennis seems surrounded by sex as Thailand has become known as a destination for sex tourists. As he is checking in to the hotel, the woman behind the counter asks him if he would like to pay for his room girl ahead of time, meaning that he has to pay extra for bringing a prostitute to his room. As he walks the streets at night, whores paw at him to get his attention and business.

Neither this film or the short come out and actually state that Dennis is a virgin, but his incompetent approach to women and near disabling shyness speak volumes about his sexual past. He meets with a man who helped his uncle meet his wife, but all this man does is introduce Dennis to cute hookers.

It is not until Dennis walks into a Thai gym that he seems at all comfortable. A gym, whether it be in Denmark or Thailand, is one of the few places where we actually see Dennis smile. In the Thai gym he makes some friends and meets a woman he may be able to connect with.

The story of a lonely man looking for love is hardly unique, but Teddy Bear tells it in a fresh way. To look at Dennis, as played by real life body building champion Kim Kold, you would think he had all the confidence in the world, but is instead socially stunted. There lies the biggest problem with the movie. It only hints at why he still lives at home with his mother and is socially awkward.

Again, I recommend you watch the short. It explains that Dennis's father was a drunk. That tiny piece of information implies that Dennis had to take on responsibilities and perhaps protect his mother. The short also includes a scene where Dennis goes to a small gathering of girls who end up embarrassing him when they talk him into taking off his shirt and dancing before their male friends come over. The short ends on a very telling scene that should have definitely been included in this full length film.

Teddy Bear is a sensitive film about a gentle giant who only wants to makes those around him happy. It is his journey to his own happiness that makes us root for him.  I only wish Mads Matthiesen would have introduced Dennis's situation here as well as he did in the short. 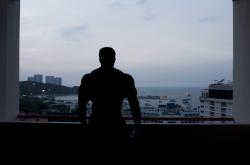 Kim Kold, as Dennis, checks out the view in Teddy Bear.

The decision to cast mostly non-actors really elevates the level of realism in Teddy Bear. At first Kim Kold's lack of expression bothered me but as I watched the movie a strange thing happened. I stopped thinking about the fact that Kold was acting and started seeing Dennis as a real human being. I agree with Eric that it's worth watching the short version first as it does give more clues into the life of this gentle giant.

Eric, it more than hints at why Dennis is so attached to his mother. It is revealed that his father left his mother while she was pregnant with Dennis. She transferred her emotions to her baby son and did everything she could to make him emotionally dependent on her. And I don't buy into the idea that a bodybuilder should be naturally confident because of their impressive physique. You have to ask what this person is overcompensating for by their obsessive weight lifting. In this case it is extreme shyness exacerbated by a mother who pathologically induces guilt in her son.

Dennis' journey of self discovery is poignant. He is so very unsure of himself around women but so at home in a gym. So you can imagine his unexpected joy at meeting Toi, a woman who owns a gym. It's immediately apparent to the audience that she's the one for him, even though it takes Dennis a bit longer to figure it out. Kim Kold may have had very little acting experience prior to making this movie but he is a revelation in the final scenes as Dennis eventually finds love and stands up to his overbearing, shrew of a mother.

As a huge fan of classic movies I was reminded of a couple of characters from the past. Dennis has much in common with Ernest Borgnine's shy Bronx butcher Marty, and his mother bears more than a passing resemblance to Gladys Cooper as Bette Davis' bitch of a mother in Now, Voyager. As Eric said, Teddy Bear takes a common theme and puts a fresh spin on it. When Dennis finally grows up it will make you sigh with relief and put a smile on your face.