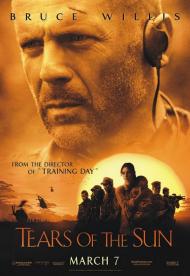 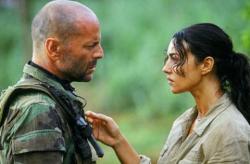 Bruce Willis and Monica Bellucci in Tears of the Sun.

The best part of any war movie is the end when the good guys succeed. The more they suffer during the course of the movie, the greater the anticipated victory. Tears of the Sun tortures too many people, including the audience, and delivers a moot victory.

Bruce Willis stars as Lt Waters. He and a hand full of soldiers are sent into war torn Nigeria to extract a Doctor (Monica Belluci) who is working at a refugee hospital. At first, she refuses to leave with the soldiers, claiming she cannot abandon 'her people.' Only after Lt Waters agrees to take them all, does the naive Doctor agree to leave. Disobeying orders, Lt Waters sends as many refugees as he can on the helicopters meant for the soldiers and the Doctor They in turn have to now walk to the border for safety.

While being pursued by enemy soldiers, the group of American soldiers and refugees come across some ethnic cleansing. In a village, a group of soldiers are torturing and slaughtering the locals. In the most shocking and grotesque scene in the movie, they come across a woman whose breasts have just been cut off.

Later in the movie, Lt Waters discovers that his group is being so adamantly pursued because one of the refugees with him is the son of the recently assassinated President. After a fire fight, with the enemy soldiers, Lt Waters says to the frightened teenager; 'Cowboy it up.' I guess that was supposed to be inspiring. I thought it was comic relief.

By the end of the movie, half the American soldiers are dead. Half of the refugees are dead. My first thought, as this movie ended, was if only the Doctor had gotten on the helicopter at the beginning of the movie none of these soldiers would have died. The biggest plot hole though is this; had they simply put the former president's son on one of the helicopters, the enemy soldiers would not have chased them. Most importantly, I would not still have the image in my mind of a dying woman whose chest is void of mammary glands.

Tears of the Sun is a political statement about the horrors of war and ethnic cleansing. It sucks as an action movie. You don't come away cheering; you come away depressed. The bad guys do not get enough of a comeuppance and the good guys really are not victorious when you consider half of them end up dead.