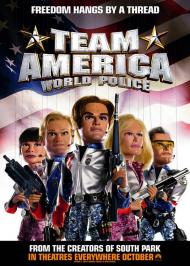 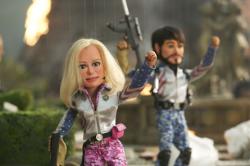 Who knew that Sean Penn and President Bush had something in common? Reportedly both men were offended by the premise of Matt Stone and Trey Parker's (The creators of South Park) latest film; Team America: World Police. And with good reason, in a movie that is sure to offend nearly everyone, Team America pokes fun at both Liberal Hollywood and America's current foreign policy. Of the two who have spoken out against the film, it is clearly Penn who has the most reason to complain, as he and fellow anti-war activists in the acting community are the hardest hit in this hilarious blend of big budget action movie and Thunderbirds-like puppetry. Neither George Bush or John Kerry actually appear in the film.

The movie begins with Team America arresting a group of terrorists in Paris. During the ensuing gunfight, most of Paris is destroyed; including the Eiffel Tower, the Arc de Triomphe, and the Louvre. When one member of the team is killed, the group recruits Gary, a Broadway actor (currently starring in Lease: The Musical), to replace him. They need his acting skills to infiltrate a terrorist organization.

Playing with the style of today's overdone blockbusters, the plot includes melodrama between Team America's members when Gary falls in love with Lisa, but can't commit himself because of a tragedy in his past. Their relationship culminates in a scene of puppet sex so graphic that it nearly garnered the film an NC-17 rating, despite the fact that both puppets are as anatomically correct as Ken and Barbie.

As the Team grows closer to uncovering North Korean leader Kim Jong Il's evil plot to destroy the world, a group of actors from the Film Actors Guild (F.A.G.), led by Alec Baldwin, begin to protest and lobby against them. In a scene worth the price of admission by itself, Michael Moore (or the fat socialist weasel, as he's referred to) blows himself up in a suicide mission to stop Team America.

Although not technically a musical, the movie does contain songs on the soundtrack featuring Stone and Parker's trademark wit. One ballad emphasizes Gary's longing for Lisa with this lyric, “I miss you more than Michael Bay missed the mark in Pearl Harbor. " And the group's theme song, with the chorus of, "Team America! F*ck yeah!" is so catchy that you won't be able to get it out of your head.

Since no CGI was used in the film, having two puppets fight in a choreographed way is difficult, especially when one member of the team is purported to be a martial arts expert. Rather then letting this harm the movie, it is used for humor. The inability for precise motion among the puppets is used quite cleverly for laughs in several scenes.

For those offended by the movie, or those who will just dismiss it as lowbrow, sophomoric humor, I think Matt Stone has the best answer when he said in a recent interview, "… I hope our movie will be a pressure valve. It doesn't mean we think terrorists are cool or American soldiers are dumb. It doesn't mean we don't have a grasp on what is important or sad or serious. But you have to be able to laugh." 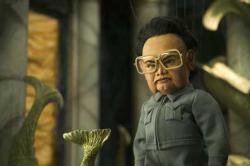 Finally, a movie that calls it like it is and is not afraid to be pro-American! Parker and Stone have the balls to put America's politics out in the open. Sure, it's with puppets, but behind the laughs, there are a lot of great political points.

Team America obviously represents the United States' habit of policing the world. Even though it is played for laughs, it shows that we have good intentions but sometimes piss foreigners off in the process.

The impotent The United Nations takes a good skewering. Weapons inspector Hans Blix threatens Kim Jong Il that if he does not let him search his palace for WMDs; "we will be very angry with you, and we will write you a letter telling you how angry we are."

Liberal Hollywood stars are poked fun at to great extent. Led by Alec Baldwin, a bunch of elite snobby actors and actresses are dupes of Kim Jong Il. They think they are creating a new standard of peace when in fact they are just a diversion. Sean Penn keeps proudly stating that he has been to Iraq. Helen Hunt sounds like a man, and Matt Damon just keeps repeating one line. The best part is when Baldwin loses it on stage during his peace speech and starts muttering about global warming.

The movie makes some great political points. It just uses the lowest level of humor to get it across. Pardon my language but it is explained in the movie that dicks are conservatives, pussies are liberals and assholes are the bad guys. The movie makes the point that a dick can f*ck a pussy or an asshole. A pussy can never f*ck an asshole. Thus, liberals cannot take care of bad guys, only a dick can. However, liberals (pussies) sometimes have to rope in the conservatives (dicks) when they go to far.

Like Scott, I thought the songs were awesome. I too sang along to the Team America theme as I left the theatre. The montage number was hysterical. The song explains what a montage is through example. They are, of course, politically incorrect. During a spoof of the Broadway show Rent, the lead sings a song about AIDS: "The Pope has got it and you've got it to. C'mon folks, we've got some quilting to do."

I haven't laughed this hard in a movie all year! 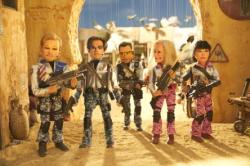 Yes this movie has some laugh out loud moments. The emotions on the faces of the puppets are priceless at times and the puppet sex scene was hilarious. I saw the unedited version which would have earned the theatrical release an NC-17 rating (it includes pissing and shitting). I also liked the songs, my personal favorite was Kim Jong Il's ballad about being lonely, "I'm so ronery". It is done with mock sincerity that perfectly spoofs similar melancholy songs from past musicals.

But overall I found the movie to be horribly racist and homophobic. It isn't just racist because all of the foreign countries look like third world villages and all of the terrorists are walking stereotypes but also because all the members of Team America are white. In fact there isn't a single positive nonwhite character in the entire movie. Not one. As for the homophobia, Scott complained that Kung Fu Hustle was insulting to gay people but I found this movie to be far more offensive. The very fact that the liberal actors are members of The Film Actors Guild or F.A.G. is supposed to be funny but it isn't. And we are supposed to find it hilarious that one of the male puppets forces another male puppet to suck his cock. Again, it wasn't funny.

So some of the jokes work but overall this movie is just too narrow minded and mean spirited for my tastes. Trey Parker and Matt Stone obviously come from a lily white community that doesn't reflect the world as most of us experience it, as demonstrated by their hit show South Park which to the best of my knowledge has just one regular black character. If you are going to rely on tired old stereotypes of minorities then please at least balance them with characters that are different as well. If not, then don't ask me to like your movie.