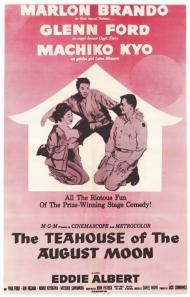 Marlon Brando in The Teahouse of the August Moon.

The Teahouse of the August Moon is notorious as the movie where Marlon Brando dons “yellowface” to play an Asian character. His broken English and stereotypical facial expressions seem quite insulting today, which overshadows the fact that the real target of this movie's humor was actually the American military. It was based on a play that was itself based on a novel about the American occupation of the island of Okinawa in the years immediately following the Second World War.

Brando plays Sakini, an Okinawan that acts as interpreter for the Americans. He begins the movie by addressing the audience directly and setting the scene. Glenn Ford plays Captain Fisby, newly assigned to run a small Okinawan village called Tobiki, with his main task being the building of a pentagon shaped school. The following exchange between Colonel Purdy and Captain Fisby demonstrates the type of humor this military satire was going for. Colonel Purdy: “You'll need an interpreter...” Captain Fisby: “I can study the language.” Colonel Purdy: “No need. We won the war.”

The crafty Sakini, along with the beautiful and talented geisha Lotus Blossom, easily convince the captain that they should educate local girls in the geisha tradition and build a teahouse instead of the school. Captain Fisby quickly goes native and he even manages to recruit the officer that is sent to analyze his mental health when Colonel Purdy begins to question the captain's state of mind.

If you take Marlon Brando out of the equation this is a decent comedy. The rest of the cast is terrific, with Eddie Albert giving a funny turn as the psychiatrist that dreams of farming (shades of Green Acres) and Paul Ford recreating his role of the bumbling Colonel Wainwright Purdy III from the stage play. He would go on to play a similar character on the hit television sitcom Sergeant Bilko. Rounding out the trilogy of stars of hit television sitcoms is Harry Morgan as Sgt. Gregovich. The future Colonel Potter on MASH has an amusing scene where he gets drunk on the locally brewed sweet potato brandy. Japanese actress Machiko Kyo is good as Lotus Blossom proving she had a gift for physical comedy just as she had proven her dramatic skills in the movie Rashomon a few years earlier.

Visually the movie is easy on the eyes. It was shot in Cinemascope and Metrocolor. It features several Japanese musical numbers with dancing geisha girls that are quite delightful. It is only the scenes with Brando (who thankfully has a smaller part as the movie goes along) that don't work because of his distracting presence.  He plays Sakini like a Japanese version of Stepin Fetchit. It's downright embarrassing to watch. Marlon Brando may have intended to stretch himself as an actor by taking on this role but the end result isn't very good. In fact his performance renders the movie nearly unwatchable today.