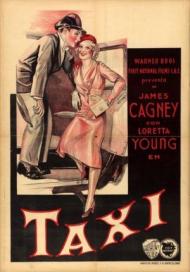 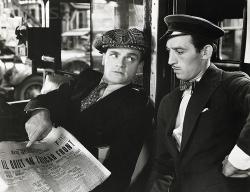 Taxi! is vintage Cagney. Released in January, 1932 this was his 8th movie since arriving in Hollywood less than 2 years earlier in 1930. As the title suggests Cagney plays a cab driver (Matt Nolan) in New York City. In the 1930's by far the majority of Americans lived in rural areas or small towns. Cagney was really the first tough street kid movie star. His rapid fire speech patterns and wise guy attitude made him the opposite of a rube. His take no crap from anyone posturing made him a hero to millions of boys and men.

Matt Nolan is an independent cabbie up against a large taxi corporation bent on pushing the little guys out of business. The beautiful Loretta Young plays Sue Riley. Her father, Pop Riley, played by Guy Kibbee, goes to prison for the murder of a man hired by the corrupt taxi syndicate to smash Pop's cab with his truck. Pop winds up dying in his prison cell of a heart attack. Later at a nightclub, Matt confronts the guy responsible for Pop's downfall, Buck Gerard. Buck pulls a switchblade and in the ensuing scuffle stabs Matt's kid brother Danny to death.

Matt and Sue fall in love and get married. The climax of the picture concerns Sue's attempts to stop Matt from exacting revenge on Buck. Matt, in typical Cagney fashion, is out for blood. He won't rest until he has avenged his brother's murder. The ending is as exciting as 1930's action gets, with Cagney uttering lines like, "Come out and take it, you dirty, yellow-bellied rat, or I'll give it to you through the door."

This movie features some great stock footage of Manhattan from the era and it is also of interest to note that Cagney speaks Yiddish in one scene, something he picked up from the Jewish kids in his neighborhood on the Upper East Side. One of Cagney's rivals as a movie gangster, George Raft, also has a small part in a dance contest scene.

Loretta Young and Cagney have good chemistry together but this is really a one man show. If you like James Cagney then you will love Taxi!, if not there's no point in watching it. 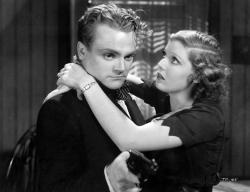 The thing that this movie will be most remembered for is the line that Patrick mentioned, which includes the words, "you dirty, yellow-bellied rat". It's the closest Cagney ever actually came to saying on film the line that is most mistakenly attributed to him and beloved by Cagney impersonators, "You dirty rat!" If not for that, and the presence of the always enjoyable Cagney, this entertaining little film would no doubt have long been forgotten.

At barely over an hour, this movie packs in quite a bit of story, without wasting time. Something today's filmmakers might want to consider doing more often. And in that hour it crams in action, romance and even a little social commentary. They knew how to move things along in those days.

Cagney is unquestionably the big draw and he's his usual cocky little terrier self, but he's supported by a couple of women. Loretta Young, who was undoubtedly one of the most beautiful women of her era, plays Cagney's dame with style. However, their relationship, like everything else in the movie, is very dated. Cagney often jokingly threatens to hit her and does in one scene. A relationship like this in a film today would be called abusive. It is the far lesser known Leila Bennett who is the real scene stealer as the comic relief. Her stream of ditzy comments provide the film's funniest moments.

Patrick mentioned the stock footage of Manhattan, and really the whole movie is a time capsule of the early 1930s. The fast talking wiseguys and their dames, spout their slang while wearing the fashions of the time. It's an interesting window into the past seen through the prism of Hollywood.

This is a minor entry in Cagney's oeuvre, but it's an entertaining one nevertheless. 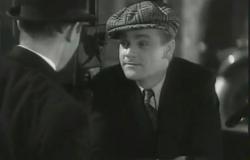 We review many old movies here at threemoviebuffs.com and have often noted that these old movies are most notable because of a particular movie star. As my brothers wrote, it is the presence of James Cagney that truly sells Taxi! They also noted the historical aspect of the film and I again agree. Sure, most movies, even the ones based on true events, tend to be fiction but the fashions, autos and, most notably, the dialogue are a trip through time.

During their first scene together, Cagney says with rude confidence to Young, “You got a date tomorrow night, keep it open.” Young snaps back, “Oh Yeah, who with?” Over the next twenty minutes we witness their entire courtship. The date was a meeting of Taxi drivers, to which Young gives a speech that Cagney does not like, interrupting her and yelling, “Ah, shut up. Yer yellow.” Afterwards, he walks her home where they again snap at each other before Young storms up to her apartment. Cagney then remarks, “I wouldn’t go for that dame if she was the last one on earth and I just got out of the navy.”

All that heat leads to a date of dancing and a movie. While watching a romantic scene in the movie theater, Young says of the actor on screen, “Gee, doesn’t he know how to make love.” Cagney shows her his most charming smile and says, “You think he’s so hot. Get a load of this.” Cagney then gives her a kiss. The next day, he proposes marriage to Young, who accepts, even though she has reservations over his temper, “You’re always ready to hit someone.”

My brothers mentioned the, “dirty rat” line and I am glad to have finally seen the movie where that famous piece of dialogue originated. I loved many of the dated lines here. Just before Danny is killed, Buck says to Cagney about his recent marriage to Young, “I bet you had to marry the bim.” I assumed it, but wanted to verify first that “bim” is in fact short for bimbo, a loose woman. The word “bimbo” has not been used since “Laverne and Shirley” in the 1970s, and that television show took place in the 1950s. Some words go out of date while others change definitions. At one point George E. Stone tells Leila Bennett, “Screw, will ya. I gotta see matt.” “Screw” would later become a euphemism for sex while here it means for her to “go away.”

I agree with Scott, Leila Bennett is a real scene stealer. She seems to share every thought in her head. “Anyhow, I can’t see why a girl has to take that run-a-round from any guy, husband or no husband.” The funniest line in the entire picture is spoken by her to Stone, “I feel like being bored and you can do the job better than anyone I know.”

Cagney was good in almost everything he ever did but if I was to ever introduce him to someone, I may start with this movie. It is a brilliant showcase of all his talents. His tough persona is on proud display as is his energetic acting style. He even dances in a brief scene Patrick mentioned. Cagney’s charm is at full wattage here. He is never anything less than exciting on screen and Taxi! is a solid piece of entertainment, no matter how dated it is.