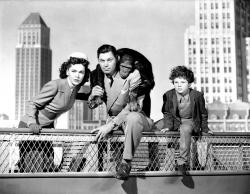 Tarzan’s New York Adventure was the 6th entry in the successful MGM franchise. It would be the final appearance of Maureen O’Sullivan as Jane. She had attempted to leave the role two movies earlier but audience outrage was so great at a test screening where Jane died in Tarzan Finds a Son that the ending was reshot and O’Sullivan was talked into staying on in her most iconic role. In 1942, a full decade after the first movie was released, O’Sullivan finally called it quits.

Johnny Weissmuller, who was by this time becoming a little thicker around the middle and a bit more worn of face, would continue as Tarzan, making 6 additional movies before hanging up his jungle vine for good in 1948.

This time around Boy gets kidnapped and taken to Brooklyn to perform in a circus. Tarzan and Jane are in hot pursuit. They follow his trail all the way to the concrete jungles of New York City where Tarzan puts his athletic abilities to good use, climbing over rooftops and such. The main conceit of this entry in the series was the chance for audiences to see Weissmuller’s jungle swinger wearing a suit.

In one scene Tarzan and Jane go to a smoke filled Club Moonbeam. Tarzan says, “Smell like a Swahili swamp. Why people stay?” Jane answers, “It's what they call having a good time.” Paul Hogan’s Crocodile Dundee would borrow many ideas from this movie more than 40 years later.

Tarzan and Jane wind up in a courtroom custody hearing for Boy where Tarzan becomes violent and is jailed. He soon escapes and makes a daring jump off the Brooklyn Bridge. The climax of this 70 minute adventure involves Tarzan and several circus elephants making a classic rescue. The final scene isTarzan, Jane and Boyswimming happily ever after together back in their beloved jungle, while Cheetah looks on. 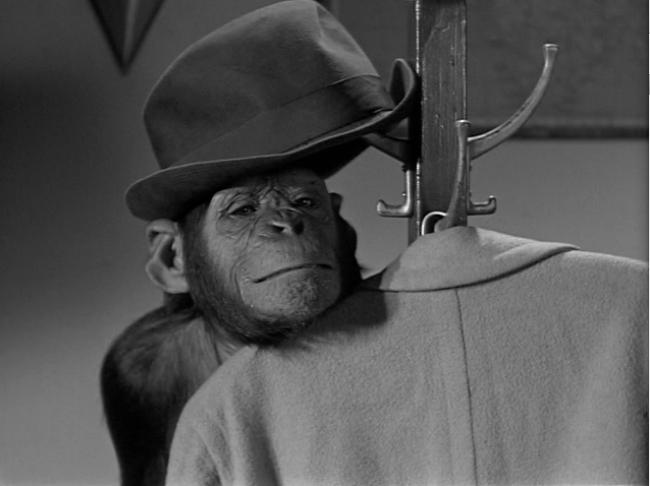 Cheetah gets too much screen time in Tarzan's New York Adventure

Tarzan's New York Adventure begins as so many of the Johnny Weissmuller Tarzan films did, with outsiders entering his jungle paradise and disturbing it. This time the men are American and they arrive via an airplane, which fascinates Boy to no end. Having been through this all before, Tarzan tells them to leave by the next morning, hoping to avoid the inevitable trouble outsiders always bring. Unfortunately, Boy and Cheetah arrive the next morning riding on elephants, to see the plane before it leaves. The men, who are in Africa to collect animals for a circus, see how well Boy has trained the elephants and decide to take him along.

This is where the movie goes into a new direction. For the first time in the series, Tarzan ventures outside his jungle and into the world of civilization. As Patrick noted, this movie's gimmick is in seeing Tarzan in the concrete jungles of New York City, climbing buildings and swinging from a flag pole as well as being dressed in a suit. As this is more Jane's world than Tarzan's, you would think she would be in the know but once again it is Tarzan's no nonsense approach that saves the day, and his ability to speak to elephants.

The idea behind putting Tarzan in the, then, modern world seemed like a unique opportunity with all kinds of potential for interesting fish out of water situations. Jane warns Tarzan, "We are going into places where men's minds are tangled worse that the worst underbrush in the jungle, and I'm afraid. More afraid than I've ever been in my life. Everywhere we'll be met with lies and deceit. Your honesty and directness will only be handicaps." However, very little is done with it. Tarzan looks around like a tourist and is impressed by common things such as a shower but otherwise we have little to enjoy. The best moment is the one Patrick mentioned when they go to the night club.

Instead of more moments of Tarzan being impressed or bothered by a world he has never known, we get lengthy scenes of Cheetah hamming it up. He attracts attention trying to get water out of a cooler. He messes up a hotel room playing with Jane's makeup. I like Cheetah but alone he is less entertaining than when he is interacting with a person or animal. His playful routine of making a mess and being scolded by Jane grew old really quick.

Tarzan's New York Adventure is a unique entry into the series but it is by far not the best.