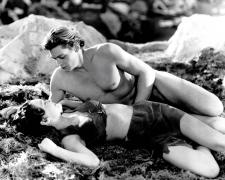 Tarzan and Jane bring sexy back to the jungle.

Tarzan and His Mate is the second of the Johnny Weissmuller Tarzan films. It is also the last of pre-Hays Code Tarzans. Like its predecessor it is a fun jungle adventure story that seems a little dated, but still provides a lot of entertainment.

This movie opens with Harry; Jane's father's partner, returning to Africa to collect the ivory they discovered in the first film. Jane's father is dead and so this time Harry has teamed up with Martin, a less scrupulous partner who is eager to earn some money off of the elephant ivory. Together they set off into the jungle hoping to find Tarzan and Jane again so that Tarzan can lead them back to the elephant graveyard and because Harry is still in love with Jane and wants her to come back to civilization with him.

Tarzan, who they eventually do meet up with, isn't keen on the idea of their looting his jungle and so comes into conflict with Harry and Martin. Along the way of course Tarzan must fight off lions, alligators, rhinos and a vicious native tribe.

The amount of sexual chemistry between Tarzan and Jane in the first film was a surprise to me and if anything they amped the sexiness up even further here. Jane is shown naked in silhouette as she tries on clothes and stockings, spends most of the movie in a loin-cloth bikini and even goes completely nude for a swim with Tarzan (a scene that was cut from many prints of the film at the time of its release). After she gets all dolled up in one scene, Tarzan approaches her, examines her all over, smells her perfume and then carries her off to his nest where the next scene shows her waking up in bed; clearly naked under the covers. It's quite obvious that the big draw for her staying in the jungle is the hot sex she's having with Tarzan. I know that Maureen O'Sullivan would get my vote for the 1930s actress I'd most like to be stranded in the jungle with.

Another trend from the first film that is carried on here is the overt racism. When one of the native bearers refuses to go any further, Martin quite casually shoots and kills him and neither Harry or Martin are the least bit perturbed by it. And once again they don't mind laying into the natives with their whips.

Unfortunately, the very poor rear projection also makes a return in several of the action scenes. When Tarzan is dodging the rhino you can clearly tell that he is standing in front a movie screen. Although just a scene later he is actually riding a rhino, so there is some trade off. Some of the scenes look quite good and others not so much.

The chimpanzee Cheetah's role is expanded this time around and he provides some nice comic relief. While not quite the great apes Tarzan is normally associated with, the chimpanzees in general are well handled and you have to give a lot of credit to the animal handlers on these films.

Once again Tarzan's origin is left a mystery and even his screen time is limited. The movie runs about 104 minutes and Tarzan doesn't even make an appearance until about 20 minutes into the story. The title is Tarzan and His Mate and it's an accurate one. Jane is given equal if not more screentime than Tarzan. Surprisingly this doesn't damage the fun at all as Jane is almost the real draw in the story anyway.

At one point Jane says the line, "A woman's greatest weapon is a man's imagination." It's also true of this movie. Even when it doesn't look the most believable you can still imagine what the film makers were trying to do and it doesn't damage the fun at all. 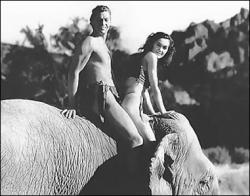 Johnny Weissmuller and Maureen O'Sullivan in Tarzan and his mate.

When I first saw this film as a kid I enjoyed the action and adventure.  The pacing is great as they never go too long without being attacked by an animal or other humans.  The landscape is rugged, with dangerous mountain trails and deep jungles filled with huge trees. I never realized at the time how much sex was actually going on.

Not only does Maureen O'Sullivan do a nude scene, but actor Paul Cavanaugh does so as well. You see him naked from the side as he gets into a tub.  When Martin first sees Jane in her sexy jungle outfit he leers, "Even if there wasn't any Ivory I'd be glad I made the trek now."  She then sees that he has been stuck with a poisonous arrow and proceeds to suck his wound while Martin smiles, clearly turned on.  He also enjoys her changing clothes with her silhouette showing some nipples.

After Tarzan carries her off to have sex you hear some moaning sounds, only to discover it is cheetah.  The next morning Tarzan smiles down at Jane, who smiles back up and coos, "Tarzan you're a bad boy."  The dialogue has some sexual innuendoes.  When Harry and Martin see Tarzan and Jane playing in the trees, Martin remarks, "That's playing?  I wonder what they do for exercise?"

What Tarzan does for exercise is to constantly save Jane.  She gets attacked by a lion, a rhino, a leopard, and a alligator.  It is a testament to Tarzan's stamina that he still has the energy to have sex after having to tiresomely save Jane.  Even after getting shot he still has to come to her rescue.

As Scott wrote, O'Sullivan is very hot here.  The director, and Weissmuller, must have enjoyed filming her nude swim scene with Tarzan.  It lasts quite a while.  Tarzan and His Mate is one of the earliest films I have ever seen where sex is treated with such casual abandon.  Sure the special effects are dated, but Tarzan and His Mate was in some ways ahead of it's time. 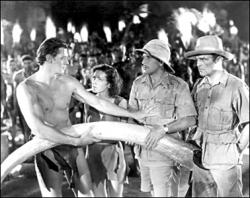 For many of the reasons mentioned above Tarzan and His Mate is the most famous of all the Johnny Weissmuller Tarzan pictures. Besides all the naked skin on display (neither of my brothers mentioned the naked breasts of native women or the nearly naked well-built black men) and suggested sex going on in the jungle it also contains the most tension-filled, action-packed ending.

The scene where Jane, Harry and Martin get trapped on some rocks by an evil native tribe is exciting. When the natives proceed to call dozens of ferocious lions to attack it gets even better. The gruesome deaths keep mounting until Jane is the last person standing.

By the time Tarzan swings to the rescue I was seriously beginning to wonder just how much longer Jane could fend off those jungle cats. I love that she has her own “Jane Yell” in this movie. It is a feminine version of Tarzan’s famous call.

In this movie there are two Cheetahs. One is a human in an ape suit while a real chimpanzee plays the baby. The grown-up Cheetah is killed saving Jane from a rhino attack.

When I watched Tarzan the Ape Man recently, and again watching this movie, I kept thinking, “Where have I seen the guy playing Harry before?” It turns out that Neil Hamilton played Commissioner Gordon on the 1960s television show Batman as well as in the 1966 movie. His older - but still recognizable - face was a sight I saw nearly everyday as a young boy.

If you watch only one of the six MGM Tarzan movies starring Johnny Weissmuller and Maureen O’Sullivan make it Tarzan and His Mate.