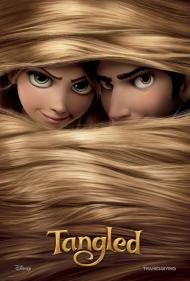 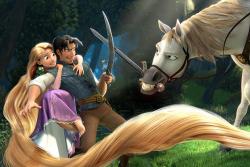 Flynn, Rapunzel and Maximus in Tangled.

Disney was clearly careful in making and marketing Tangled.  The main character is a girl whose notable for her long locks.  Why would boys want to watch it?  To cover this they gave lots of screen time to Flynn Rider, a roguish, adventurous thief.   Although the  previews did not show it, Tangled is a musical.  Again, the filmmakers cover this by always employing an action scene right after someone finishes singing.

What you have is a very well balanced film that both girls and boys can enjoy.  Even my teenage sons said it was pretty good.  They both liked it better than Deathly Hallows.

To save a baby princess, Rapunzel, as she is being born, a rare magic flower is used.  The flower had been hid by a very old woman and used to keep herself young and alive long after she should have died of old age.  She steals away with the princess and raises her as her own.  When she sings to the girl, her hair glows golden and restores the old bats youth.   She keeps Rapunzel locked in a tower with the story that she is her mother and is protecting her from the outside world.

One day, Flynn Rider and a couple of fellow thieves, steal Rapunzel's crown from her parents castle.  They get chased into the woods by soldiers and a dedicated, scene stealing horse.  Flynn ends up in Rapunzel's tower.  She hits him over the head with a frying pan and she hides the crown.  She makes him a deal that if he takes her out of the tower for a little excursion, she will give him the crown that she does not realize is actually hers.

They take a walk and fall in love.  At one point they come upon a pub full of violent looking warriors. Flynn, then has my favorite line, "You smell that? It's part man-smell, and the other part is really bad man-smell, but overall it just smells like the color brown. Your thoughts?"

Rapunzel charms the men.  They sing a song and end up being chased.  The dam bursting scene is the movies best action moment.  Rapunzels mother finds out that her life sustaining magic is now walking about and plans to recapture Rapunzel.

Tangled is classic Disney.  In the tradition of so many of their films, a princess is captured and harassed by an evil mother figure and later rescued by a hero.  Shades of Snow White, Cinderella and Sleeping Beauty can be found here.  It is a formula that works, only this one can be enjoyed by both boys and girls. 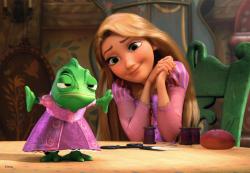 Mandy Moore provides the voice of Rapunzel in Disney's Tangled.

When I first read your review Eric, I thought you were making quite a lot out of how this movie is aimed at both boys and girls, but now I agree with you. Most Disney movies are very girl-centric. After all, they're famed for their Disney Princesses, not their princes. Tangled on the other hand, gives nearly as much time to Flynn as it does to Rapunzel.

I also agree with you Eric that the horse (who appears to be part bloodhound) is a total scene-stealer and probably my favorite character. Although the vikings also manage to steal a few scenes as well.

One of the weaknesses of the movie is the songs. They're okay and Mandy Moore has a pretty good voice, as does Donna Murphy as her mother, but they're not very catchy or particularly memorable. Even now, just having seen it, I'm struggling to remember any of the words. None of them really add that much and the movie could just as easily been done without them.

Another problem with the story is that despite the talented voice work of Donna Murphy, there's a real lack of a strong villain. Mother Gothel is rather passive aggressive, but really she's just incredibly selfish rather than incredibly evil.

What the movie does have going for it is a witty script and a charming cast.  Moore and Levi embody their parts perfectly.  The story bounces along very quickly and keeps you laughing as you go.

While Tangled is funny and possesses a pleasant degree of charm, it breaks no real ground for Disney. It's still mainly about a plucky princess yearning to be free and find love. It's a formula that Disney has been milking for years and why not? It's still working for it.