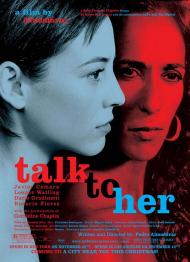 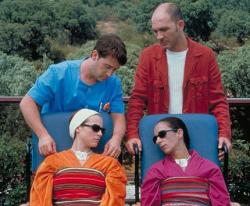 Pedro Almodóvar is a stylish and highly original filmmaker. His Spanish language movies have done well here in the United States dating back to the late 1980's. Women on the Verge of a Nervous Breakdown, Tie Me Up! Tie Me Down! and All About My Mother are his best known movies in this country and the first two helped launch the career of Antonio Banderas. Talk to Her won Almodóvar the 2003 Academy Award for Best Original Screenplay and garnered him a nomination for Best Director.

The story is about two men named Benigno and Marco who meet at a clinic and form an intense friendship. Benigno is a nurse who cares for a beautiful young woman named Alicia who has been in a coma for four years. Marco is there to visit his girlfriend Lydia. She was a famous Matador who was gored by a bull and is also in a coma.

The plot jumps around in time a bit as the story of these four characters plays out. It leads to a rather unusual climax that I won't give away because it may turn off some potential viewers. I will say that the details are distasteful and bizarre but nonetheless compelling.

Visually and emotionally Almodóvar is a throw back to the 1950's melodramas of Douglas Sirk and Ross Hunter. But content wise he is completely modern as is his sense of humor. For example one memorable scene features a giant vagina.

The friendship between Benigno and Marco is well written. Marco never deserts Benigno even though he knows that what Benigno did was not only wrong but downright sick. I was glad for the happy ending between Marco and Alicia.